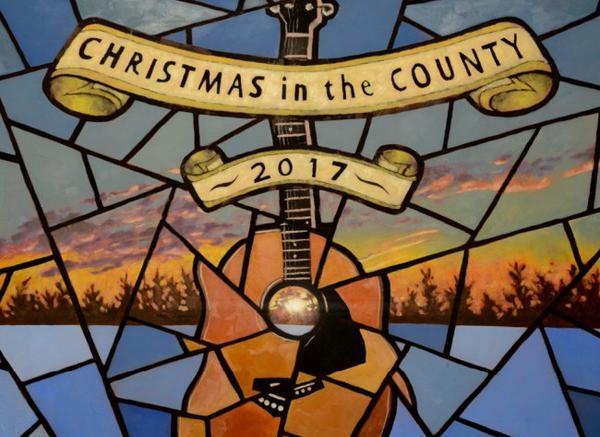 Christmas in the County 2017 now on sale

Last-minute gift buyers have a chance to support local learning initiatives while brightening a loved one’s home with music made right in Prince Edward County. 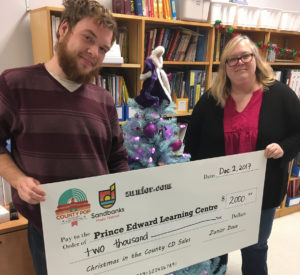 Chords For The Classroom – PELC student Patrick McLallan and instructor Lori Farrington show off zunior.com’s minimum $2,000 contribution as a result of Christmas in the County 2017. (Adam Bramburger/Gazette staff)

Christmas in the County 2017, the fourth instalment of Zunior.com’s holiday CD series is now available and once again all proceeds will go to the Prince Edward Learning Centre.

Music promoter and producer Dave Ullrich said he hopes to achieve three objectives by continuing to release the Christmas CDs. The first is to bring together a community appreciation for local musicians and the eclectic mix of styles in the county. Many of the artists over the years have also been involved in his festivals, County Pop and the Sandbanks Music Festival, so the release helps their fans to collect the dots between the live performers and their recorded works.

“The album provides just another forum for local artists to develop and showcase original material and songwriting/arranging in general,” Ullrich said. “The skill and commitment of recording and recording in new places and new ways is a highlight of some of the best songs that have appeared on the albums over the years. My dream is to see a year where every single song on the album is a local original, ideally telling local and personal stories.”

By extension, it also offers a chance to promote both those musicians and the cover artist, Mile Murtanovski, by leaving a lasting impression of their work in a digital age. Murtanovski painted a sunrise from his backyard with the original canvas being auctioned off in support of the project.

Co-producer Lori Farrington, of the Prince Edward Learning Centre, said she really enjoys the mix of songs on the 2017 CD. It features some new artists that have never performed in the series as well as some steady favourites Farrington says “always deliver quality stuff.”

Among the new additions this year is Annelise Noronha, a sound engineer and musician who moved to Wellington from Toronto. She wrote a song called “All the Whos” as an ode to her new home.

“I had a great time writing a song about my new home in Wellington. A thank you to the community that has made me feel acceptable here,” Noronha said.

She added she was really pleased to be part of the project.

“Not only is it a fun and seasonal way to raise money for PELC, but it also has been a great way to connect musicians from all over the county that otherwise may not have met.”

Justin Rutledge and Chris Bonham-Carter are two of the new additions this year whom Farrington said have impressed her with their musicianship.

A couple young musicians — Ella Jade and Siobhan Bodrug — will also be showcased this year.
Jade is a 14-year-old singer/songwriter who was featured on the side stage at last year’s County Pop festival and who is no stranger to local stages. She plays piano, ukulele, and guitar and has a soulful style. She welcomed the chance to give back.

“Being able to give back to my community has been such an awesome and exciting experience for me.”

Bodrug, 13, performs with her dad Brent, a Juno-nominated producer and songwriter, who offers keyboard accompaniment. Farrington was wowed by her at a recent CD release party.

“Siobhan is such a powerhouse. We had our CD release party at Parsons and she kind of comes up very shy. She didn’t intro the songs, her dad did that. She was really nervous,I think, then she opened her mouth. It was insane, this old soul, bluesy voice. She’s incredible.”

Farrington also joined in the fun, recording a song of her own this year.

“Recording a song for this year’s album was really important to me, both as a musician and as a literacy instructor at PELC. I’m always encouraging my students to do things that challenge themselves and felt like it was a good way to do the same!” she said. “I love working on this project. It’s a perfect meld between my work life and my artistic life.”

Ullrich has pledged to donate at least $2,000 to PELC, with 100 per cent of the funds going to the cause.

Farrington said it will help with programming that isn’t covered by base funding.

“We do a food program and it can supplement some of that. We do hot meals twice a week and nutritious snacks all the time,” she said. “It will also allow us to do more experiential learning. I love taking students places. I’m pretty keen on trying to get a group of students to Toronto to see a big theatre piece.”

The CD is available at Books & Company for $12 or the music can be downloaded from zunior.com for $8.88. Farrington said there are also some 2016 CDs available from a 200-piece run and previous releases are still available for digital download.