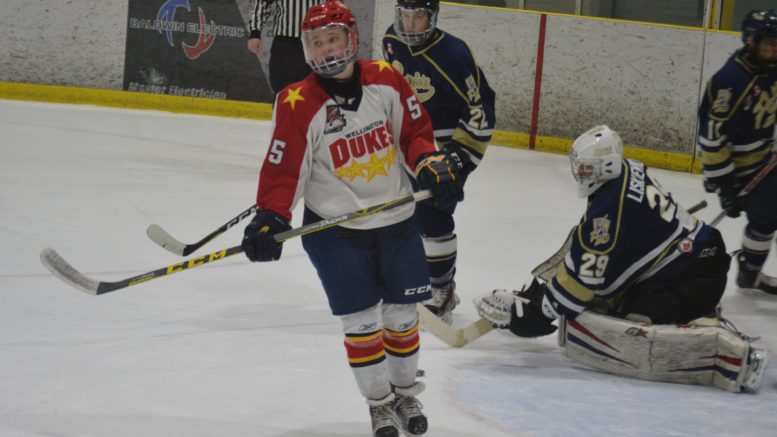 IN SHORT SUPPLY- Due to injuries and players being away from the team, Wellington was forced to call up a number of reserves in mid 2018 including then 15-year-old Ethan Cardwell of the Clarington Toros Minor Midget program. (Jason Parks/Picton Gazette)

The short-staffed Wellington Dukes continue to stagger into the Christmas break, but they managed a valuable road point in Buffalo Sunday afternoon to stem the tide of regulations losses at two.

Wellington, still without of number of top-end players due to travel issues and sickness, were downed by the Junior Sabres 3-2 in double overtime.

The loss comes on the heels of a 3-1 setback to the visiting Toronto Patriots Friday night.

Wellington (22-6-8, 52 points) still has a 15-point lead on second-place Kingston in the East Division but one can be sure the organization will be thrilled to be reunited with captain Colin Doyle, Mason Snell and Ben Evans when the trio finally returns to the lineup.

Picked to the Team Canada East squad at the World Junior A Challenge late last month, the trio last played for Wellington Dec. 1 before heading to Truro, N.S.

With their service to Hockey Canada fulfilled as of Friday night where the squad beat Switzerland in overtime thanks in part to Doyle’s game-tying tally late in the third period, it’s hoped by the club the players will return to the lineup Tuesday when the Dukes are in Lindsay to play the Muskies. LONG ON LANGDON- Issac Langdon, 15, of the Quinte Red Devils AAA Minor Midgets already has a commitment to Clarkson University and was one of the handful of players called up by the Wellington Dukes this weekend. (Jason Parks/Gazette Staff)

Wellington has also been without star forward Teddy McGeen who last saw action Dec. 3 in a 4-2 win over Kingston and has been felled with an upper-body injury.

Without some of its star-studded lineup, Wellington has struggled to score goals and this has been painfully evident in its last two games.

On Sunday, Wellington surrendered a shorthanded goal late in the first frame but rebounded in the second to out pace the host Sabres.

Jackson Arcan’s power-play marker from Andrew Rinaldi at 9:22 got Wellington back on even footing.

The Sabres’ Matt Jakubowski would push Buffalo ahead about five minutes later but Wellington got the last laugh of the frame as Nelson Powers beat Brian George with under three minutes to go in the second stanza.

After a scoreless third, Wellington dominated the first and second overtime, outshooting the Sabres 11-2 combined but an Ethan Kirbis volley part-way through the three-on-three period found a hole in Wellington starter Jonah Capriotti.

On Friday, Wellington was missing the aforementioned Canada East players and McGeen as well as Mitch Martan who was out with the flu.

The Dukes and Patriots played it tight through the first until Oliver Benwell knifed home a backhand on the doorstep just 1:26 left in stanza to give the Pats a 1-0 lead.

That was extended to 2-0 when Lee Lapid followed up his own rebound just 1:20 into the second.

Daniel Panetta would strip Oliver Benwell of the puck midway through the second period and pot a shorthanded marker to the short side of Pats netminder Owen Liskiewicz.
Wellington would bend but not break and looked to be in a position for a late game push until Wellington defenceman Noah Lugli casually tossed aside a Patriots stick that he had somehow become entangled with during a stoppage.

Lugli earned an unsportsmanlike conduct penalty and the Pats made Wellington pay for the transgression as Ryan Wells ripped a puck past Capriotti to make it 3-1.

After Tuesday’s road contest, Wellington will host Newmarket on Friday for the last regular season game of 2017 on the first-ever Dukes alumni weekend.

Several former Dukes players of all vintages are expected at both Friday night’s game as well as an alumni contest slated to be played at 10 a.m. at Essroc Arena.