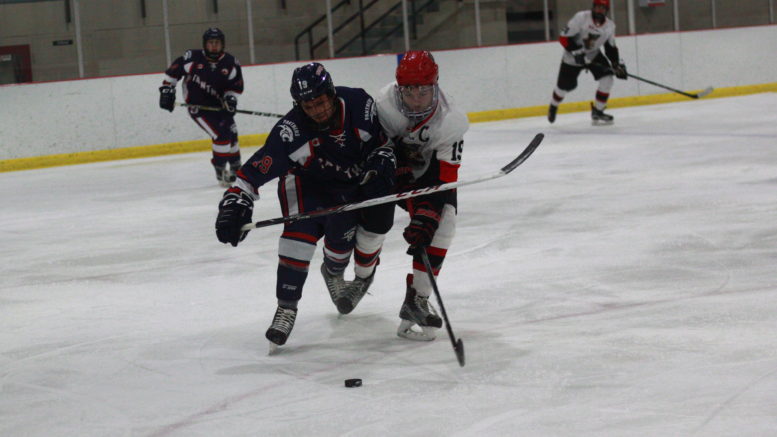 The home teams seemed to have the advantage this week.

The Picton Pirates looked dominant in a home win over the Panthers on Thursday, but fell by an 8–3 margin in the rematch in Port Hope on Saturday night.

Picton general manager Chris Masterson said Thursday’s contest may have been the team’s most complete game of the season to this point.

“We were really solid defensively, we got good goaltending, we scored some timely goals and we were really happy with the game,” he said. “We executed well, guys crashed the net, picked up all the rebounds that were there and put them in.”

The Pirates had a quick start and got some fortunate bounces against a Port Hope team that couldn’t seem to find their game on Thursday. Picton took the lead 8:48 into the opening frame when a defensive breakdown led to a two-on-one rush. Picton forward Jordon Cannons had Panthers goaltender Sheldon Calbury thinking shot the whole way, but he fed a slick pass to Chase Burden. A diving Calbury couldn’t get over in time to stop the shot as Burden buried. Justin Arnold also picked up an assist on the play. The Pirates doubled their lead less than two minutes later when a rebound off Calbury squirted back into the slot. In the ensuing melee Nate Boomhower picked up the puck and lifted it past the goaltender. Calbury didn’t like the goal, seeming to suggest he’d been interfered with.

The Pirates extended their lead to three with the final seconds ticking off the clock. Justin Arnold managed to streak in alone on Calbury, faking and trying to slide a backhand under the pad of Calbury. The goaltender made the initial save, but the Pirates kept digging and the puck slid across the line. Cannons got the goal from Burden and Arnold.

Just seconds later, following a offensive zone faceoff win, the Pirates appeared to make it 4–0 with a slapshot from the point. The puck appeared to hit the mesh a fraction of a second before the horn, but it was ruled no goal and Picton entered the second period up 3–0.

The Panthers generated some momentum, scoring 3:11 into the second, but they were never able to mount a comeback.

Three minutes later Cannons scored his second of the night, from Matthew Scott and Arnold, to make it 4–1. The three-goal lead held up through the remainder of the second and both goaltenders were perfect in the third as the Pirates picked up two big points.

Masterson said the team knew Port Hope would come out hard in the third and Picton coaching staff reiterated the importance of weathering the early storm.

“We once again had good goaltending and good attention to detail, good team defence, and we were able to lock it down,” he said.

Goaltender Wesley Werner made 32 saves on 32 shots in the victory.

Last week Masterson stressed that special teams would be important against the Panthers. Port Hope went 0-for-5 on the power play Thursday. Masterson said he felt the team played a disciplined game and didn’t take bad penalties. The perfect penalty kill could be traced back to the team’s willingness to work, said Masterson.

“If you take a bad penalty, the other team always seems to score — so that was part of it,” he said. “Guys were working hard overall in the game. The guys worked their tails off and penalty killing is all about hard work.”

The tables turned on Saturday as Port Hope seemed energized in their own building.

Graham Dickerson scored just 22 seconds into the game to put the Panthers in front.

The early goal was a deflating one for the Pirates, Masterson said.

“It was a rough start, almost the total opposite of Thursday’s game,” he said.

The home team doubled their lead 8:53 into the frame with Cody McNabb scoring.

Will Harrison completed a play from Braden Bertrand to cut the score to 2–1 just under a minute later, but the Pirates couldn’t swing the momentum.

Dickerson scored his second at 13:06 to make it 3–1 and Cameron McGill added another with less than three minutes remaining to give the Panthers a significant lead heading into the second.

“We had too many passengers on Saturday night, we didn’t have enough guys willing to pay the price,” Masterson said. “To beat them regularly, we have to bring our ‘A’ game every single time.”

The Pirates pressured in the second, generating lots of shots on goal, but again it was Port Hope finding the back of the net. Aaron Toms made it 5–1 11:53 into the period, but less than a minute later the Pirates struck back with an Arnold power-play goal. Tye Eaton and Riley Manion had the assists.

Masterson said it was a much better second period for Picton, but the team came up flat again in the final frame.

Up 5–2 to start the third, the Panthers went back to work. Just 12 seconds in they increased their lead to four.

Harrison’s power-play marker from Nick Kyte at 5:18 cut the deficit, but it was all the offence the Pirates would muster. Cameron Harris and Dickerson scored over the last half of the third to bring the final score to 8–3.

“They were flying at us from the start of the game and we did not come prepared,” said Masterson.

Masterson said the break will give him an opportunity to sit back and assess the roster and any potential needs prior to the stretch run.

“We’re looking at the playoffs and we’re looking at potentially playing Port Hope by the look of it, so I’m analyzing what it is that we need to do to be able to compete with them in a full series,” he said.