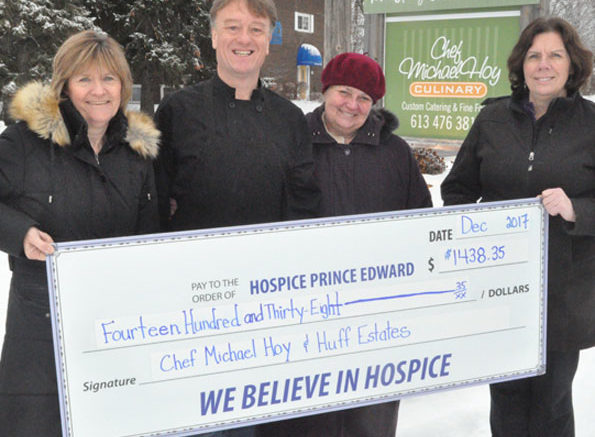 Food was front of mind Friday as Hospice Prince  Edward received a $1,438 cheque from chef Michael Hoy — and not just because the presentation happened at a restaurant.

Executive director Karen Moore explained the organization has recently been looking into ways to provide prepared food for families with loved ones staying at the residential care centre on Downes Avenue.

“We’re thinking food for food with this donation. It will support that goal” she said. “We have a committee set up and we’re working on it. We have some really keen volunteers.”
Recently, in collaboration with Huff Estates, Hoy held a series of five dinners at his 106 Bridge restaurant where he contributed $5 from each entree to Hospice Prince Edward.

The restaurant also collected money outside of those dinners.

“Every event we had on top of that, the tip jar was out and people dropped money in the jar,” Susan Hoy, Michael’s wife, mentioned. “We had a group from the east coast touring the county. They were here for lunch and they all went into their purses.”

Michael Hoy recalled at that luncheon an organizer walking through the restaurant with a bucket, telling people to dig deep. That day alone $121 in change was gathered.

The chef said supporting Hospice was a no-brainer given the amount of people it supports with its palliative care and bereavement services.

He said he’d like to do some additional events in the new year in hopes of supporting the organization.

Already, he is partnering with Hospice on one of its major fundraising initiatives planned for 2018 by providing the catering for a Feb. 10 gala with the theme “When you were young and in love.”

The event will be held at the Highline Hall in Wellington at 5:30 p.m. There will be live music provided by Eddy & The Stingrays, live and silent auctions, dinner, and dancing.

Tickets are now on sale through the Hospice Prince Edward office for $100 a person. Those wishing to reserve are asked to call 613-645-4040 or e-mail Moore at kmoore@hospicepe.com.