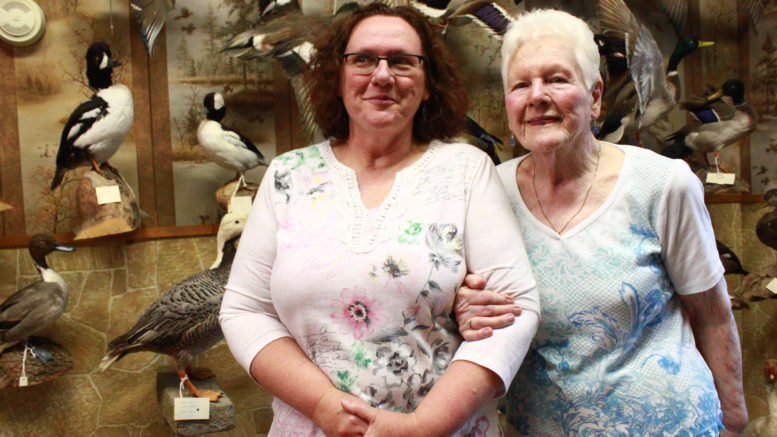 Jane Moon and her mother Johanna de Vries showcased some of the specimens crafted by the late Jake de Vries back in June 2016. (Chad Ibbotson/Gazette staff)

Councillors heard a revised plan for the taxidermy collection of Jake de Vries during Tuesday evening’s council meeting and reiterated their commitment of municipal funds to purchase display cases and other materials for the project.

On Tuesday, de Vries’ daughter Jane Moon spoke on behalf of the the Jake de Vries Collection Group. She told councillors that some changes to the scope of the project are now being proposed. Due to the death of her mother Johanna de Vries, the project will be adjusted in order to expedite the collection’s relocation to the museum.

“With some discussion, we looked at how we can move this further along,” Moon told councillors.

The altered proposal is to use half of the space at Ameliasburgh Heritage Village’s green barn — an area of about nine metres by nine metres (30 feet by 30 feet). Moon said the group feels the reduced space will be adequate and would still allow plenty of room for visitors to explore the specimens. A reduced budget could help speed the process.

The budget would be reduced to $154,000 and, rather than commit a pre-determined amount to a maintenance reserve, any excess funds raised would be committed to that purpose. The restoration of the building is estimated to cost about $61,000 including HST, while installation of a heating, ventilation, and air conditioning system would cost about $42,000. The remainder of the budget would go toward flooring, a new roof, and exhibit materials.

To date the group has managed to raise about $62,260 toward the project. Moon said applications will be made to foundations and grant programs that align with the project’s goals and vision for the collection in order to secure the remainder of the project’s budget.

“We’ve been actively looking at ways of raising money to reach our goal,” she said.

Council voted to carry forward their $22,000-commitment within the museum’s capital budget to purchase materials to display the collection. That money is contingent on the group successfully raising the remainder of the budget.

The collection group first brought to council the idea of moving the more than 500-specimen collection to the green barn in December 2015. The collection includes waterfowl, mammals, songbirds, reptiles, and fish.

The total project was anticipated to cost $275,000 including an $85,000 reserve to maintain the retrofitted green barn.

In June 2016, the fundraising campaign officially kicked off with the Prince Edward Stewardship Council donating a cheque for $15,000 and the Stark Family Fund committing $7,500. The group has been actively fundraising since.

Moon said the project’s guiding principles to keep the collection together, keep it in Prince Edward County at the Ameliasburgh Heritage Museum, and to present a public tribute to de Vries haven’t changed. She said the significance of the collection remains the same, bringing with it a lot of opportunity for promoting education and awareness of local natural heritage.

“What we feel is important about this collection is that he always looked at it as an opportunity for education and awareness of all sorts of natural heritage, making use of local specimens,” Moon said. “Also, looking at him as an artist and a local artist that lived in the county since 1948.”

A staff report presented to council on Tuesday says the group is planning to conclude its fundraising in 2018. The report says ideally the project would be completed in 2018, which would coincide with the 50th anniversary of Ameliasburgh Heritage Village.

Museum staff have identified the project as a way to revitalize Ameliasburgh Heritage Village with a collection that would underscore the importance of natural heritage education. The report suggests the collection will directly result in increased visitation to the museum and will connect new audiences with natural heritage. The collection would also open up an opportunity to discuss de Vries’ background as a post-Second World War immigrant living in and contributing to Prince Edward County.

The green barn, constructed in the ’70s is showing considerable wear and would need capital upgrades regardless of whether the de Vries collection is displayed there, the report says.

The estimated additional cost of covering summer dehumidification and updated lighting is expected to be about $700 per year. Security upgrades, such as a new alarm system, and insurance adjustments are expected for the site and the report says there may periodically be costs for conservation of mounts and marketing materials.

The report says the group have also agreed to another alternative plan in the event the project’s budget isn’t secured by the third quarter of 2018. In that case, the funds raised to date would be used to prepare the museum’s church gallery for the collection.