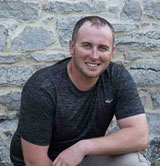 Kyle Andrew Shorrock
December 14, 1990 – December 14, 2017
Tragically on Thursday, December 14, 2017 our Kyle was taken from us, on his 27th birthday while working from a Hydro One helicopter. Kyle was a dedicated partner to his fiancé Brittany Robertson and adored her above all. He was a dutiful and loving son to his mother Sherry and irreplaceable little brother to Laura (Chris) Wilcock and Melissa Shorrock (Zack Price). Kyle was a precious and silly uncle to nieces Grayce and Emmerson Wilcock, and nephews Rhett Wilcock and Owen Price. He will be affectionately remembered by his grandmother Joan Shorrock and many aunts, uncles and cousins. Kyle is predeceased by his father Ian Shorrock (1995), grandfather Bryn Shorrock (1992), grandparents Jim (2012) and Virginia Ellerbeck (2017) and niece Davy Isabella Wilcock (2015). Kyle was embraced into the family of Tracy (late Dale, 2013) Robertson, Jessica (Nick) Porter, Brent Robertson (Felichia Dingman) and their daughter Mackenzie and grandmother Gaye Bannister. Kyle and Brittany were just a few weeks away from their upcoming wedding in the Bahamas on January 17, 2018. Kyle loved his chocolate lab Mocha, spending time at the hunting camp, being outdoors, snowmobiling and four-wheeling. Kyle enjoyed his job with Hydro One and was excited at the opportunity to be working from the helicopter. He will be missed by many friends and coworkers. We would like to thank his Hydro One family for their medical assistance at the scene, as well as the OPP and all first responders for their compassion to the family. We would like to extend our condolences to his two crew mates, the pilot and their families. Kyle’s family will receive friends at the James Reid Funeral Home, 1900 John Counter Blvd., Kingston on Wednesday, December 20, 2017 from 2-4 and 7-9pm and on Thursday, December 21, 2017 from 10-10:45am followed by a service celebrating his life at 11:00am in the chapel.  For those who wish donations in Kyle’s memory may be made to the Heart and Stroke Foundation or to the Huntington Society of Canada.
“You are my soulmate, best friend, and everything. You made my world go round. I love you to the moon and back xoxo” – Brittany
www.jamesreidfuneralhome.com