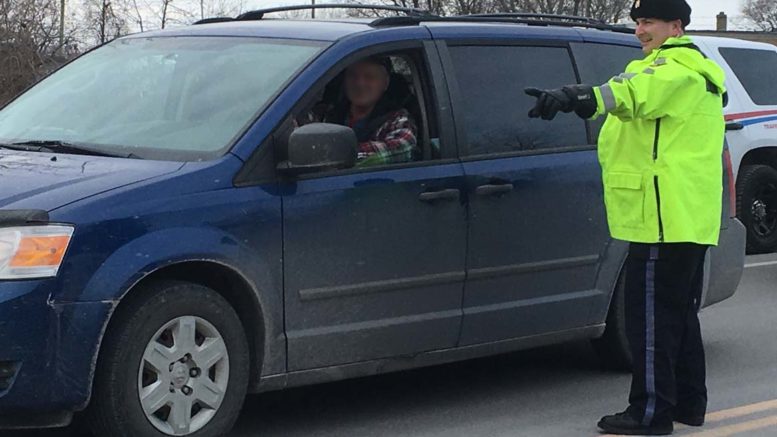 While Prince Edward County may not have had a fatality related to impaired driving this year, local OPP detachment commander Staff Sgt. John Hatch says too many people are still not getting the message.

“I can say that in Prince Edward County we’ve actually caught more impaired drivers this year than we did last year. Whether or not that’s an indication of an increase, from my perspective, it’s still a problem,” Hatch said while helping kick off the Quinte Region Traffic Coalition (QRTC) Festive RIDE (Reduce Impaired Driving Everywhere) campaign Thursday in Rossmore.

Hatch said “on average, we catch about one per week,” with about 50 arrests in 2017. In 2016, the statistic was similar with the number in the high 40s. He said the numbers have to change and the best method is through education and enforcement.

The roadside stop programs are effective in both regards, Hatch said.

“The whole focus of RIDE is not to catch people — we do catch people, but it is to be visible and to deter. I said it earlier, we’ll set up a RIDE program (on Hwy 62 south of the Norris Whitney Bridge) and in 15 minutes, half of Belleville knows where that RIDE program is. And that’s good. It might just make that person make the phone call to get that other ride home.”

“While RIDE programs are critically important in removing those impaired drivers from the roadway, the is fact social media is reaching other people about RIDE programs and locations and the deterrent factor is significant,” he said, adding he hopes people will think twice and come up with another option to make it home or spend the night rather driving.

“It’s not socially acceptable, it is just absolutely wrong, and there’s so many innocent lives lost due to impaired driving by alcohol and drugs that it has to stop.”

Hatch said in talking to one of his sons who is a breathalyzer technician, the primary demographic of offenders seems to be those 35-55, which shows younger people are getting the message through school they shouldn’t drive impaired. He does have a concern, however, that while young drivers are doing well with alcohol, they might not know the dangers of other substances — particularly with marijuana use becoming more common.

“The younger people in my experience are focusing on not drinking and driving, but they may be more apt to try something like marijuana perhaps. That’s going to be a challenge we have in the next year for sure.”

“There might be misconceptions. We have to recognize any drug could impair driving. The science is maybe a bit less understood and the effects are less understood, but it is clear that despite maybe a common belief it’s not as impairing, marijuana would be impairing driving ability,” he said. “We are concerned with more use we may see more impaired driving.”

Oglaza continued, however, that any drug, including those prescribed by medical professionals may impair cognitive function.

“It’s always important to talk to a doctor or nurse practitioner,” he said.

Even with alcohol, Oglaza said there are no hard-and-fast rules about its impacts on individuals.

“The simple way of preventing this injury is to assume there’s no safe level of alcohol. Any level of alcohol could potentially impair a person,” he said. “The way the alcohol is absorbed depends on many factors — whether someone is a male or female, body weight, how much food they’ve had… We have to assume there is no safe level. We have to assume anybody who is drinking should not operate a motor vehicle.”

While Oglaza said there has been an improvement over a long term in reducing impaired driving, those numbers have stagnated somewhat since the late 1990s.

“There’s still a lot of room for improvement,” he concluded. “It’s an entirely preventable cause of injuries.”

He encouraged people to speak up if they see a person who is impaired preparing to drive.

Hatch said this time of year is an opportune time for an impaired driving campaign.
“There’s the social aspect with Christmas parties, office parties and families getting together. Everybody seems to socialize and that’s our focus. The timing is good for us,” he said.

Quinte West Const. Dave Ludington said sometimes the forces will work together, particularly around municipal borders. On one given night, he said upwards of 20 officers could be out in the region doing the checks.
“We need the public to know when we’re out here, we do mean business. It’s not something we take lightly. Drinking and driving is definitely an important, avoidable crime.”

The QRTC encourages area residents to plan ahead and know a safe means of transportation home such as a tax, designated driver, public transit, or service like Operation Red Nose. Organizers of social gatherings are also asked to plan ahead by asking for car keys, inviting guests to stay overnight, or having money and phone numbers available to offer safe transportation.