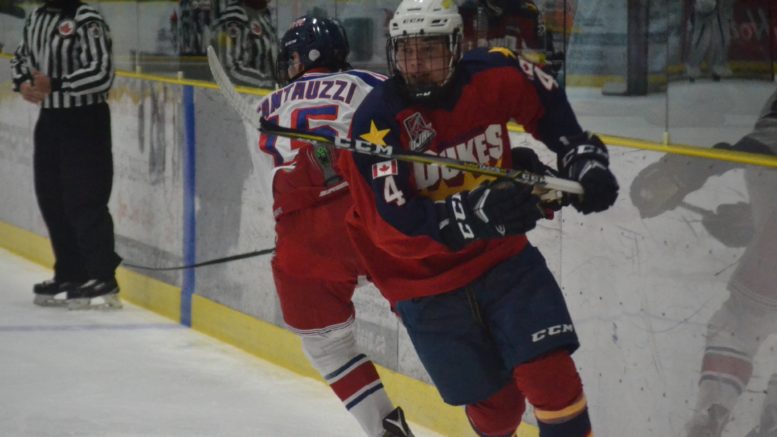 GETTING A SHOT- Wellington Duke forward Eric Uba has committed to the Flint Firebirds of the Ontario Hockey League and will be suiting up for the Major Junior club over the next three games. (Jason Parks/Gazette Staff)

A Wellington Duke will be getting his chance to play hockey at the major junior level over holidays.

Forward Eric Uba has signed an offer from the Flint Firebirds of the Ontario Hockey League and joined the club for practice on Wednesday.

Uba has scored eight goals and added 13 helpers for 21 points in his first 37 Junior A games this season for Wellington.

It’s expected that Uba will play three games with the OHL club while Wellington is enjoying a two-week break in the 2017-2018 Ontario Junior Hockey League schedule.

Barring an unforeseen development, Uba should be returning to Wellington in the new year.

The situation is believed to be similar to that of former Wellington Duke Tyler Burnie who played a couple of games with the Kingston Frontenacs in 2015-16 season while the Dukes were on holidays for the Christmas-New Years shutdown.

Uba, a Kitchener native that just turned 17 on Dec. 17, was a late round draft pick by the Firebirds in the 2106 OHL Priority Draft.

This past season, Uba was a key cog in the Ayr Centennials march to the 2017 Jr. C Schmalz Cup championship, picking up 62 points in 40 Provincial Junior Hockey League games.

In a post to twitter, Uba said he was proud to announce his signing of an OHL offer sheet and thanked his family, friends, teammates and coaches for getting him to this stage of his career.

In release issued from the Firebirds organization, Flint vice-president of hockey operations and general manager Barclay Branch said the team was excited to announce Uba had committed to an OHL standard player agreement and education package.

Uba had multiple NCAA teams inquiring about his future services this fall but recently made the decision to commit to the Major Junior program in Flint.

The Firebirds hosts the London Knights this evening and then travel to Sault Ste. Marie to play the Greyhounds Friday.

On Saturday, the Firebirds tour back through Michigan and stop in Saginaw to face the Spirit.