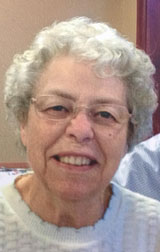 Clara “Terry” Gwendolyn Haight (nee Outwater)
November 17, 1939 to December 26, 2017
It is with great sadness that we announce the passing of Terry. Terry was the proud Mom of Bob (Michelle) Cardwell and Barry (Rose-Anne) Cardwell. She loved her 7 grandchildren, Mitchell, Mason (Samantha), Shane (Tiffany), Samaira, Justin, Johnny, and Jamie Cardwell. Terry was very proud of her 3 great grandsons, Bronson, Tyson and Dawson Cardwell. There will be some angels waiting for her in heaven including her loving husband Wayne Haight (Nov. 19, 2012) and her brothers Gary and Doug Outwater. She will be truly missed by her siblings Ken (Bev) Outwater, Joan (Gary predeceased) Feeley, and her twin brother Clay (Kay) Outwater. Terry will be fondly remembered by her best friends Ethel and Donny Thompson. And by the Haight family Gord (Marg), Arlene (Dave) Davidson, Ronnie, Ernie (Dianna), Grant, and Terry (Christine). Predeceased by her in-laws Alton and Lora Haight. Terry grew up on Young St. in the south end of Peterborough. She loved to sing and dance and bake. She was married for the 1st time as a teenage girl to Bob and Barry’s Dad where she worked really hard as a hairdresser in their home. She liked being close to her children when they were young. After the marriage ended and as a single Mom, she worked at Westclox as a department lead hand. Then, she met Wayne and they were married and moved to Prince Edward County. There she worked for FBI Food and Beverage for many years. Later, Terry and Wayne opened their own business: Haight Septic Tank and Excavating. They also owned a farm and raised Blonde d’Aquitaine cattle. One of Terry’s most favourite things to do was look after her nieces and nephews. In retirement, Terry and Wayne moved back to Peterborough to look after her aging parents and brother Gary. She was very kind and always willing to be there for those who needed her. When Wayne passed away, Terry was diagnosed with Dementia with Lewy bodies. She lived with Bob and Michelle until she entered Fairhaven in February of 2013. Here she spent her days in the choir, helping the girls in the kitchen and other residents and telling great stories. We can’t thank Fairhaven enough for their wonderful care of our Mother. A special Thank you to those on the Special Care Unit and Westview 4: Michelle, Lindsay, Mandi, Lorri, Janet, Margo, Megan, Jade, Sam, Rhonda and Lisa. Donations to Fairhaven would be greatly appreciated! Due to the distance in which people have to travel, visitation will be held at HIGHLAND PARK FUNERAL CENTRE, 2510 Bensfort Rd., Peterborough, on Friday, January 26th, 2018 from 1:30 P.M. – 2:30 P.M. followed by a funeral service in the Highland Park Chapel. Interment Highland Park Cemetery. Reception to follow. online condolences may be expressed at www.highlandparkfuneralcentre.com