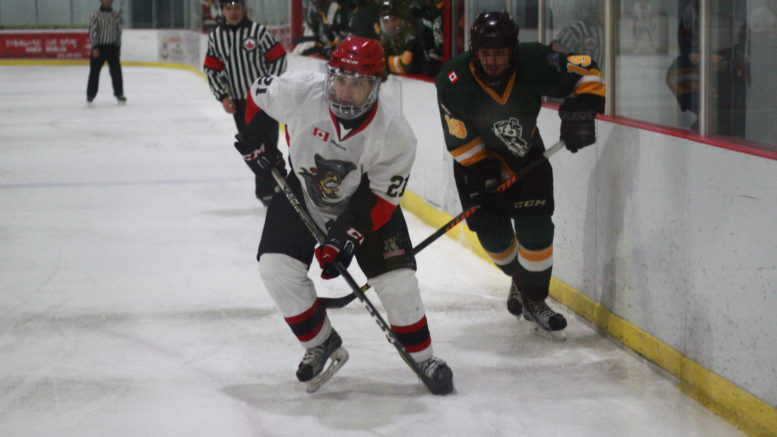 The Pirates widened the gap between themselves and the fourth-place Amherstview Jets last Thursday with a 2–0 win.

Picton is sitting comfortably in third place in the PJHL’s Tod Division with 35 points in 26 games while the Jets trail by eight with 27 points.

Picton coach Tyler Green said both teams were short-staffed in last Thursday’s game and it all came down the hardest-working group.

“It was definitely a grind,” he said. “I know the boys were gassed, but they seemed to find that extra gear in the last period when push came to shove.”

The Pirates lost forward Bailey Matthews for the first half of the opening frame due to a warm-up violation, but caught an early break themselves with Amherstview’s Joey Mayer sent to the box for hooking just 39 seconds into the period.

The Pirates went to work and, just 41 seconds later, Nate Boomhower found the back of the net to put Picton in front. Tye Eaton and Noah Brant assisted on the play.

Green said the first goal was an important one, but he felt the team had plenty of opportunities throughout the contest that they weren’t able to capitalize on.

Regardless, the goal held up as the difference through 20 minutes as neither team was able to find the back of the net. Picton held a 13–9 advantage in shots in the period.

The clubs traded chances in the middle frame but, again, neither team could bulge the twine. The Jets pushed back, leading in shots 16–12 in the second, but Boomhower’s goal remained the difference through two.

The Pirates needed some insurance in the third and they got it 3:55 into the frame when Brant connected on a play from Jordon Cannons to make it 2–0.

The Jets outshot Picton 15–13 in the period and 40–38 overall, but goaltender Werner remained perfect to secure the win.

The club will be busy next week with three games on the schedule. The Pirates take on the Jets again Thursday, before visiting Napanee on Friday night. Puck drop for both games is 7:30 p.m. The team then visits Gananoque on Sunday night at 7.

Green said he’s expecting the team to have the same jump tonight as they showed last week.

“They know how crucial it is,” he said. “We definitely want to finish ahead of (Amherstview) in the standings to get that match-up against Port Hope, so hopefully they come out flying like they did last week.”