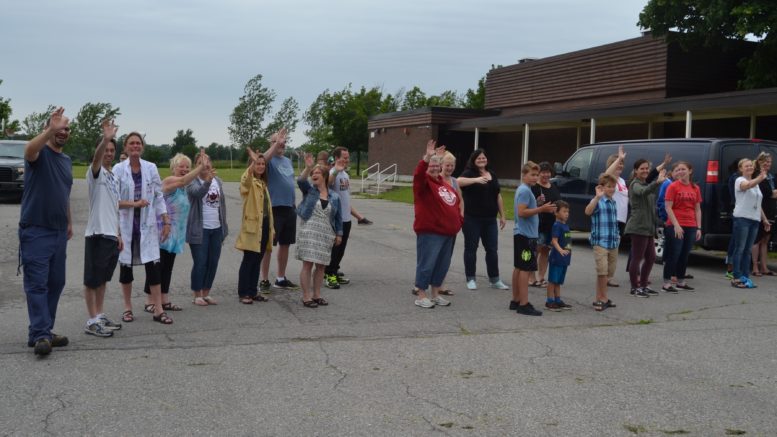 A NEW BEGINNING?- Staff members waive to departing Pinecrest Memorial students at the end of the 2016-2017 school year. A community group is attempting to repurpose the shuttered elementary school in Bloomfield into a seniors housing and community hub. (Jason Parks/Gazette Staff)

In order to make a vision of a community seniors housing development and community hub a reality, the LoveSong Housing group needs a laundry list of support from all three levels of government.

But prior to most of those tumblers falling into place, LoveSong needs an expression of support from the community.

The concept of turning the former Pinecrest Memorial School in Bloomfield into an affordable seniors housing complex and recreation centre gained traction late last month when Prince Edward County Council agreed to approach Hastings and Prince Edward District School Board on behalf of the faith-based group connected with Emanuel Baptist Church with an expression of interest concerning the surplus building and adjacent lands.

This motion was a necessity for the group given there are a limited number of bodies-government agencies, school boards, social service providers, etc. That can speak to the board prior to the building going out for public sale.

Ken How of the non-profit LoveSong Co-Housing Initiative explained municipal support was the first big step in a series of big and little steps that need to be taken if this dream ever becomes realized.

With still so many questions to be answered with regards to this plan of creating self contained units and shared living and recreational space inside a former elementary school that was built in 1967 and shuttered at the end of last school year, the LoveSong group is hosting an information night at the Bloomfield Town Hall on Jan. 16th starting at 7 p.m.

How said that while the group is connected with mostly Emanuel Baptist church goers, there are non-church members working inside the group.

“It has to start somewhere and there was a seed planted in my heart and mind and that expanded to include Emanuel Baptist but there’s members of the team that are not members of the church and are not Christians,” How explained. “It’s not for Emanuel, it’s for senior Prince Edward County residents looking to live independently in Prince Edward County and hopefully its filled with people from here.”

It’s hoped that the renovated Pinecrest building would be able to offer a complement of 50 affordable, safe and secure units.

But How stressed that it was important not to get too hung up on the former education facility.

“We’ve been through the building and we have internal and exterior pictures, drone pictures however, we haven’t got the building yet,” the former elementary educator told the Gazette. “We’ve come quite a long way from a concept but there is still a long way and a lot of parts that need to fall into place.”

In advance of bringing this idea to both council (which was done through a deputation by LoveSong member Joy Vervoort last month) and the public through the information night later this month, How recently travelled to Parry Sound where an affordable housing initiative saw a group purchase and transform the former William Beatty School into a series of one and two bedroom apartments.

The thrusts for affordable housing in both areas are similar in that both locales are influenced heavily by the tourist and summer rental markets, putting a premium on living space as well as a former school is being repurposed.

However, the Parry Sound project is affordable housing for all.

“There’s a lot of different groups involved in Parry Sound and there are a large number of the units that are utilized by Community Living clients,” How said. “But it is the closest model there is in Ontario compared to the concept LoveSong is looking at.”

How said the timelines, concpets and pitfalls in the Parry Sound project could be used as a template for what would be expected in the LoveSong project.
A political hot potato for some time in this community, affordable housing has been identified as a priority in Prince Edward County with municipal council pledging $250,000 in the 2018 operations budget for pilot housing programs and the like.

How hopes the concept turns the tide of dwindling living space for seniors in Prince Edward County.

“Hopefully it’s a win-win for every party- for the community and the municipality. We all know there’s a great need here,” How added.

For more information on the LoveSong project, please visit lovesonghousing.org