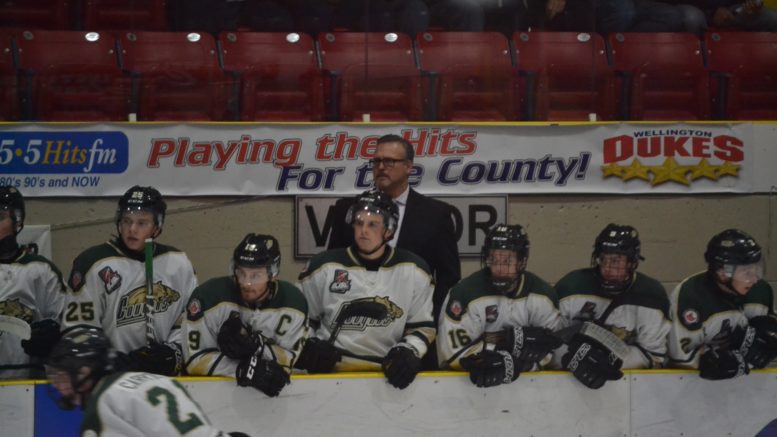 MAJOR SHAKEUP- Former Cobourg Cougars coach John Druce has been hired by the Wellington Dukes after Scott McCrory was relieved of his duties over the Christmas holidays. (Jason Parks/ Gazette file photo)

One of the best Junior A hockey teams in the province of Ontario has undergone a major transformation prior to the Jan. 10 Hockey Canada player acquisition deadline.

And it has nothing to do with players.

When the Wellington Dukes hit the ice Friday night at Essroc Arena to take on the visiting Trenton Golden Hawks, former Cobourg Cougars head coach John Druce will be behind the bench guiding the local team.

Druce is a former NHLer who led the Cougars to a 2017 RBC Cup championship the club hosted and will be taking over for Scott McCrory who has been relieved of his coaching duties but will stay on with the club in another capacity.

A fellow former NHLer and a Dukes alumnus in Derek Smith will be coming aboard to assist Druce.

Assistant coach Ryan Kitchen was let go in the shake up, while fellow assistant Kyle Hawkins Schulz will be utilized by the club in a different role.

“There was a little bit of disconnect on the bench. We feel like we have the personnel to make a run this season —with one or two additions — and wanted to correct it,” Uens said.

The Dukes blew through the 2017 portion of the current OJHL regular season, posting a 22-7-8 mark and currently sit atop the North-East Conference with 52 points.

However, the club had struggled as of late and had lost four games in a row prior to the Christmas break.

Despite the gaudy numbers, Uens said issues with the staff had been building for a while.

“The disconnect was concerning and our talent in the dressing room made up for a lot of these issues most nights, but overall, we just need to be more cohesive from the top down,” Uens added.

In Druce, Wellington picks up a coach that’s coached at the major junior and Junior A levels and was able to capture lightning in a bottle for the RBC-host Cougars last spring.

“He’s someone that earns a lot of respect for his past accomplishments and is a true gentleman,” Uens said. “He’s the perfect guy to come in at this stage and take this team where they need to go. He’s the right combination of coaching ability and accountability.”