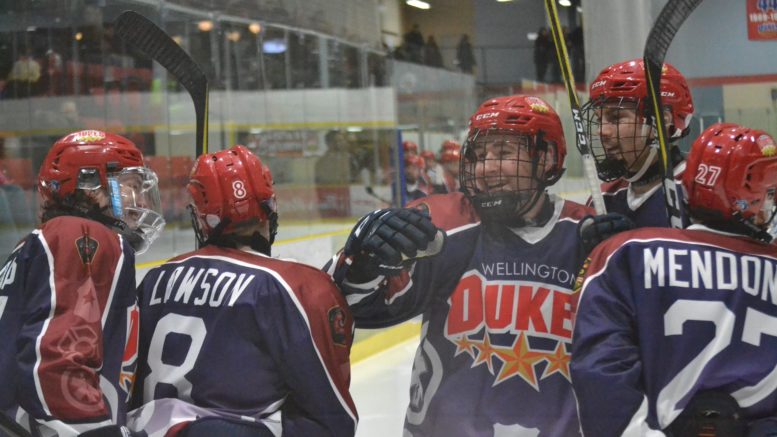 It was a short time of hectic transition but it didn’t take long for the Wellington Dukes to bust back into the win column after a four game slide.

Despite playing for a new coaching staff, the club showed some familiar traits this weekend in picking up a pair of wins — both on the positive and negative side of the puck.

Coming slow to the gate, getting better through the middle stanza, and displaying an ability to make the pretty plays under pressure this weekend, the Dukes an overtime win over Trenton on Friday and a decisive victory over Lindsay on Sunday.

With the wins, Wellington (24-7-8) increased their spread on the field in the Ontario Junior Hockey League’s North-East Conference with a circuit-leading 56 points and a .718 winning percentage.

Newly minted bench boss John Druce said the weekend served as a chance for himself and assistant coaches Derek Smith and Mike Farrugia to get a first-hand assessment of where the club is.

If there was one constant ailment the club has suffered from all season it’s been poor play in the opening period and Druce noted that in both contests this weekend.

“There was a slow start in both games and that’s not something we can live with. We have to be ready to start at the drop of the puck,” Druce told the Gazette Monday. “The compete level continued to grow as the games wore on and there’s little things we can work on as the season goes on but I don’t want to come in make drastic changes.”

On Sunday, Wellington broke open a 1-1 draw with two goals in under two minutes at the midway point of the second period. Declan Carlile set up Eric Uba at 10:01 and then Jeff Burridge spotted Nelson Powers at 11:46 to to make it 3-1 in favour of Wellington.

Lindsay’s Braydon Leeking got the Muskies to within one before the close of the frame but the third was almost all Wellington.

Andrew Rinaldi (two), Mitch Martan and Colin Doyle all lit the lamp in the first 12 minutes to make it 7-2 Wellington before Muskies Forward Noah Dollo scored to get Lindsay to within four.

Wellington starter Jonah Capriotti was spot on the rest of the way and made 29 stops for his 16th win of the season.

Druce mentioned a really good practice session on Saturday helped pave the way for Sunday’s effort and it was key to beating Lindsay considering the North Division doormats beat Wellington in the final game of 2017.

“I think at this age, guys see a team below them in the standings and automatically think it’s a point night but Wellington lost the last time these two teams played,” Druce said. “That’s part of changing the mentality and making Lindsay play with us and play our game right at the start.”

On Friday, it was a feeling out process for both the club and the staff and Wellington falling behind 2-1 after one wasn’t overly helpful.

However, the Dukes battled back and took the play to the Golden Hawks in the second.

Ben Evans made a nice pass to Geoff Lawson just 44 seconds in and the blueliner banked a puck in off the pipe behind Trenton starter Will Rawski to make it a 2-2 game.

Under a minute later Wellington captain Colin Doyle took an errant puck and made a nice wrap around effort on Rawski to give the Dukes their first lead of the game.

Trenton’s Tiger MacDonald would tie the contest later in the second but Wellington had most of the scoring opportunities and the puck was regularly making into the Golden Hawks end for extended forays.

In the third, Martan caught Rawksi leaning to far to the netminder’s left and picked the far side of the net for a go ahead goal just 95 seconds in.

Trenton’s Rex Moe bagged his second of the game at the 7:35 mark on a puck Capriotti likely would have liked back and the stage was set for an exciting finish.

In the four-on-four session, Evans made a nice pass to Carlile who snapped a puck up under the bar and popped the water bottle off the Trenton cage for an exclamation point on the winner at the 4:22 mark.

Druce and the Dukes will welcome the Cobourg Cougars to Essroc Arena Friday evening and, for the first time in his coaching career, the past 2017 Royal Bank Cup-wining bench boss will face his former team.

“It’s going to be exciting,” Druce admitted. “It helps a little bit when you have some familiarity with the opposition but I look at this like when you get traded away as a player. There’s a level of excitement in facing your former team but you have to go out and worry about your own end and take care of what you can control.”

Wellington will close out the weekend with its first road trip of 2018 when the Dukes take on the Flyers in Orangeville.