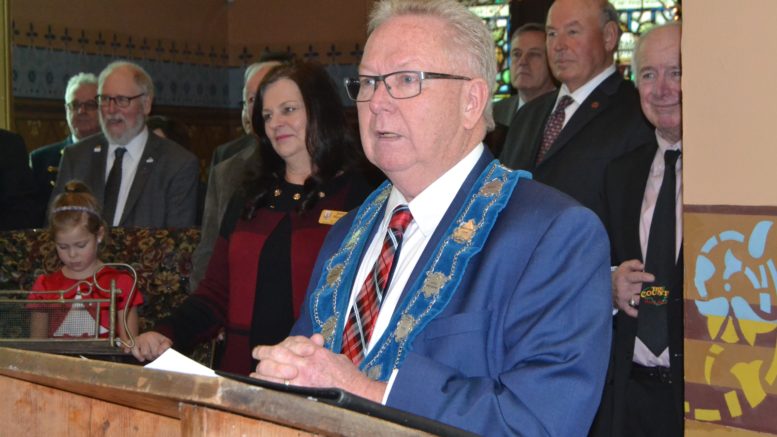 A TIME FOR EVERYTHING- It was an eventful 2017 that Prince Edward County Mayor Robert Quaiff, joined by members of County Council, discussed at the annual New Year's Levee at Macaulay Museum on Sunday afternoon. (Jason Parks/Gazette Staff)

Don’t ever let it be said 2017 was another ho-hum year in municipal politics in Prince Edward County.

Crisis and celebrations set the tone for the past calendar year and, as is the custom, Mayor Robert Quaiff and County council gathered Sunday to ceremoniously close the books on the past year and welcome 2018 at the annual New Year’s levee held at Macaulay Museum.

Led by piper Josh McFarlane of 8 Wing Pipes and Drums who played the Auld Lyne Syne, members of council and Quaiff gathered in what was the pulpit area in the former Anglican church after welcoming both residents and visiting dignitaries.

In his prepared remarks, Quaiff touched on ways Prince Edward County and its people persevered and prospered in 2017.

In early spring, the collective resolve of the community was tested by two major incidents- A water emergency due to the sinking of a barge in Picton Bay in March, and spring flooding a few weeks later due to high water levels on the Bay of Quinte and Lake Ontario.

Quaiff thanked all those that rose to the challenge and answered a call during this stressful time. “County staff went above the call of duty time and time again. Community agencies and service groups assisted admirably. Volunteers came forward, while neighbours and friends rallied to help one another,” Quaiff recalled. “With the flooding, many property owners, farmers, and tourism operators were negatively impacted. The recovery was slow, but the resiliency of our community made me incredibly proud to call Prince Edward County home.”

The mayor was encouraged by the progress the municipality made guided by the Prince Edward County’s corporate strategic plan.

“We want to make sure residents can continue to access health-care services in our community.We are seeking to promote a business-friendly environment while also maintaining the rural and historic character of our community. And we are striving to achieve financial stability in our government,” Quaiff said.

In 2017 council adopted a new framework aimed at encouraging growth and creating stability in the development community.

And, as the municipality implements the 31 solutions outlined in the framework, Quaiff said he’s confident the County can build on the momentum we saw in 2017.

While construction activity was up, tourism was sustained in spite of less-than-ideal conditions in the early portion of Prince Edward County’s busiest season.

Another County-operated website, BuildANewLife.ca, continued to be great resource and attract new residents to Prince Edward.

The website, something Quaiff called a key investment and resident attraction tool, led to 130 total new business inquiries in 2017, with a total value of $65 million in start-ups relocating or expanding.

In addition to the aforementioned expansion in housing and new resident and business attraction, existing businesses in Prince Edward County were surveyed by the Community Development Department and over 80 per cent are growing locally with 63 per cent expect their sales to increase in 2018.

Expansion and growth are great however a stagnant workforce could cripple these gains and Quaiff admitted strengthening the workforce in the coming years would be a complex issue with the availability of diverse housing options is a major contributing factor.

“We know that businesses are struggling to attract or retain employees because many can’t find a place to live in the county. A booming housing market such as ours can be both a blessing and a curse. It’s a challenge for private developers to address affordability issues, and the municipality is limited in what we can do to encourage affordable housing,” said the mayor. “But throwing up our arms in frustration is not an option; this issue is too important to ignore.

Council, staff, and the community and economic development commission are working to identify unique ideas, solutions, and approaches to address affordable housing needs.

In order to pursue potential solutions, council set aside $250,000 in the 2018 budget for affordable housing and while this seed funding won’t solve the issue overnight, Quaiff said it’s crucial there is progress made in 2018.

A major highlight of 2017 for Quaiff was the approval by the Ministry of Health and Long-term Care for Quinte Health Care to make a pre-capital project submission to the provincial body in advance of the Prince Edward County Memorial Hospital redevelopment.

“I can honestly say that day was a major highlight of my term as mayor. The Stage 1 proposal is now before the ministry and the document focuses on the future of the hospital, including the recommended site for the new hospital, details of hospital services over the next 35 years, a high-level space plan, and cost estimate,” said Quaiff.

Looking ahead, $9 million worth of work on roads will be undertaken in 2018 as well as the completion of the County Rd. 49 engineering study that will outline rehabilitation options for the major access route.

In closing, Quaiff mentioned that voters would be heading to the polls this October for the first time with the new nine-ward electoral boundaries in place.

“I encourage all Prince Edward County residents here today to cast their vote on Oct. 22. But don’t stop there. Talk to your family, friends, and neighbours and encourage them to vote. As the closest level of government to the people, I would argue that municipal government has the greatest potential to impact your life on a day-to-day basis,” Quaiff said. The chance to have your say in who represents you on County council only comes along every four years.