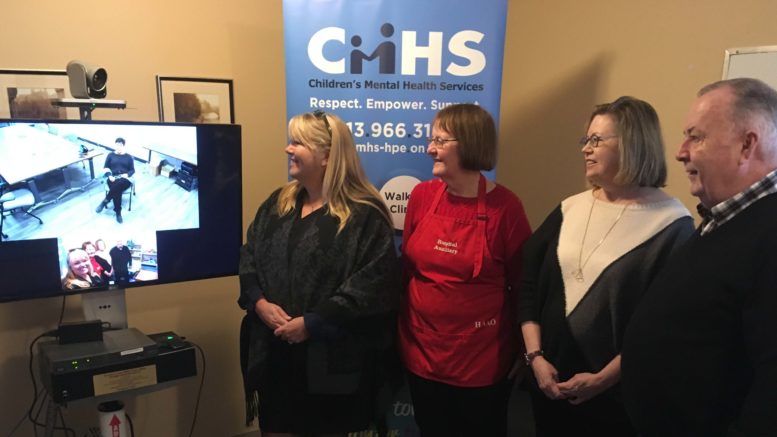 Prince Edward County youth now have the ability to access psychiatric and psychological professionals without leaving their own community.

On Friday, Children’s Mental Health Services of Hastings and Prince Edward unveiled a $25,000 video portal to the Ontario Telemedicine Network (OTN) at its office on Picton’s Main Street.

Executive director Susan Sweetman and board secretary/treasurer Kate Brookfield eagerly watched the screen as child and youth counsellor Hal Wilhite adjusted the camera to bring them into the field of vision just in time for a video call to the Belleville office. Their invited guests, Prince Edward County Memorial Hospital Auxiliary president Pat Evans and secretary Andre Gratton looked on approvingly.

The auxiliary made the final donation last fall to get the project off the ground.

In a bright room decorated with motivational posters and filled with children’s books and toys, Wilhite explained how consultations might work with medical professionals outside the region.

“Usually, the consulting psychiatrist or psychologist has a rundown of what a family or client is hoping for, a synopsis of what they’re presenting with and their progress,” he said. “Really, we try to set it up so the client is really able to talk to the doctor themselves, rather than us orchestrating the event — unless, of course, they want us to be the voice in the room. We really advocate for the child and parents to speak with the physicians and feel like they’re getting their questions answered.”

During consultations, staff can also shut the sound off to allow parents and children to talk with one another without interrupting a doctor.

With Kingston being the closest place to access a psychiatrist in person, there’s a heavy demand for the service and a long wait list. As she worked to raise funds last summer, Brookfield said a child could often wait six months for a consultation. Then, there’s other pressures that make those appointments difficult such as affordability of travel or parents being able to get away from work. Children might also not be as willing to open up in a strange place after a long commute.

With the telemedicine portal, that wait time could be diminished to less than a month.

“There is a psychiatrist that is connected to our agency and they are here on a regular basis through OTN,” Wilhite said. “They’re set up with a list of referrals in different offices and they can consult with everybody that day from the different offices.”

He added the modern technology also makes it possible to bring more specialized services to the youth the agency serves. If a child has a complicated case or, say, an eating disorder, there are doctors available via Sick Kids and other hospitals available to consult.

“There’s a bit of a wait time for those consultations, but we’re able to make that connection,” Wilhite said. “Travel was often impossible.”

Via the OTN, Children’s Mental Health staff members can also access workshops to further their education to learn new techniques for therapy or suicide prevention and get licensing credits without having to leave the office and miss time with clients.

Sweetman said the agency has reached out to other health providers and community support agencies to allow them to access the network for training and education. The Prince Edward Family Health Team is one organization that is interested in the technology. Community Living Prince Edward also has its own OTN portal and licence, though they may have use for the Children’s Mental Health unit, Sweetman said.

With regard to its own use for clients, Sweetman anticipates usage will grow over time.

“Our guesstimation in the first year would be a minimum of 25 times, but once it gets going — it’s new and we don’t use it enough yet, so we’re still considering the application — it’s going to be more and more, maybe 50-100. It just depends on how many consultations we need,” she said. “We don’t do as many consultations now because we’ve just never had the resources.”

Sweetman said Children’s Mental Health is also on a cancellation list which may allow it access to specialists on short notice to serve clients in need more quickly.

While she said Children’s Mental Health has a good presence in the county already, particularly with Wilhite in schools offering counselling and taking referrals, news of the OTN service may prompt more referrals in short order.

Children’s Mental Health is also looking at establishing a walk-in clinic in Picton in the near future.