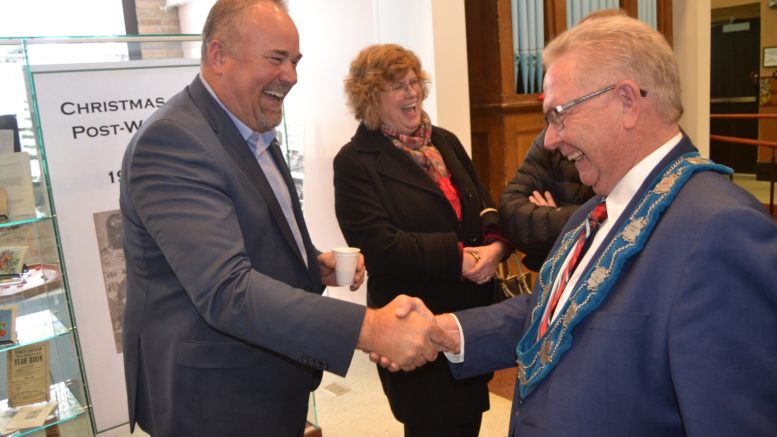 SO FAR, SO GOOD- Prince Edward-Hastings MPP Todd Smith and Prince Edward County Mayor Robert Quaiff share a laugh at the 2018 New Year's Levee at Macaulay Museum Sunday. Quaiff, a Liberal nominee in the upcoming provincial election, said he is in the race to win a seat at the Ontario Legislature. (Jason Parks/Gazette Staff)

Given the class of the individuals involved, it’s not surprising what could have been a tense scenario at the recent Prince Edward County New Year’s Levee was easily swept aside.

There will surely be chances to ramp up the rhetoric as Prince Edward-Hastings MPP Todd Smith defends his post against all candidates including Prince Edward County Mayor and Liberal candidate Robert Quaiff in the 2018 Provincial Election.

But for now, a few verbal volleys aside, the pre-campaign jockeying seems rather tame.

On Sunday, the tardy Smith showed up just after Quaiff’s formal remarks and the mayor was quick to welcome the MPP to the annual get together, glad to Ontario’s Energy critic was “finally” back from vacation.

Later, both men shook hands where Smith wished the Mayor “All the best” in 2018.

“Well, maybe not all the best!” Smith corrected with a hearty laugh. 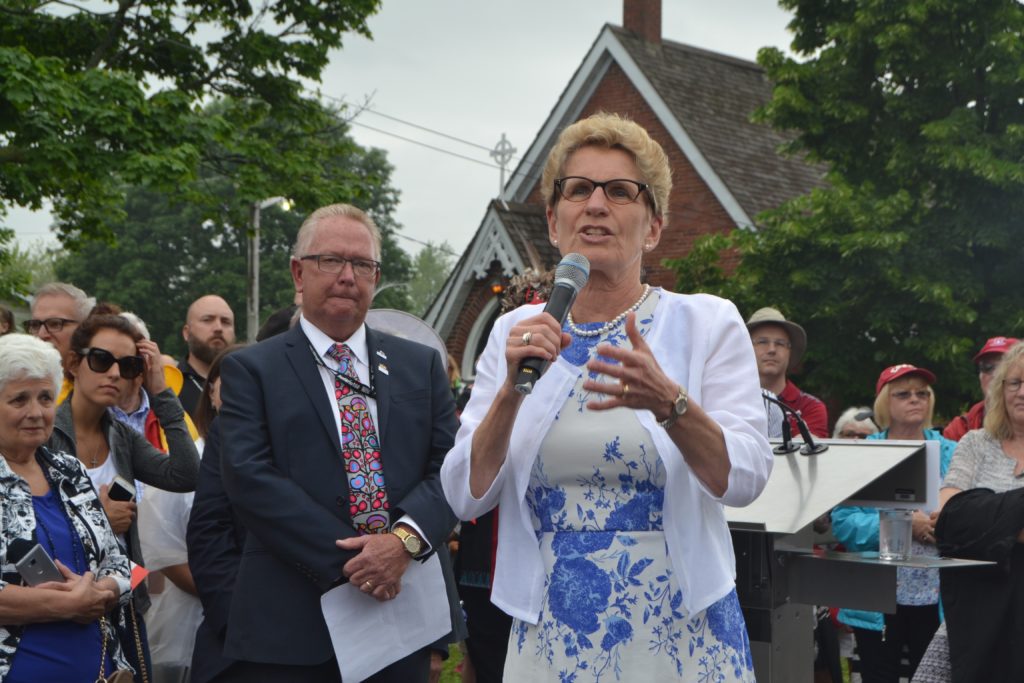 In a scrum following his official comments, however, Quaiff made it clear he’s aiming at knocking off Smith who has curried favour with the regional electorate in the last two provincial runoffs.

For Quaiff, it was about alignment and he explained that as time wore on during his term as mayor, he has seen eye-to-eye with the Premier and her policies.

“In the past four years, I’ve come to express my concerns to (Ontario PC Leader) Patrick Brown and we never really got those concerns addressed. But then when you started talking to the provincial Liberal party and Premier Wynne, the thoughts and the ideas were the same as mine,” Quaiff said.

With both candidates having a firm lay of the land in terms of provincial politics and municipal needs, the race to represent Quinte at the Ontario legislature this summer should be an interesting one.

Last week, Smith told the Gazette voters in this area will likely be weighing their vote with respect to party leaders and not exclusively local candidates.

“I don’t think this run is going to be about Robert Quaiff and Todd Smith, it’s about Patrick Brown and Kathleen Wynne and the all policies she stands for and the policies he stands for,” Quaiff added.

Given the political clime in rural Ontario and the nature in which those areas have trended towards the PC party over the past two elections, Quaiff realizes the campaign trail will need to be widely explored in the coming months.

“I know I’m in tough but I don’t go into anything to lose,” he stated.

Quaiff, who won’t be seeking re-election municipally, also took time during the scrum to speak about some issues in the mid-to-distant future that the next Council will likely face.

“We know we are in crisis mode when it comes to affordable housing in Prince Edward County. We’ve set aside the money this year and we know we have to start scratching the surface,” Quaiff said, mentioning the LoveSong Co-operative Seniors housing project at the former Pinecrest school as one initiative that could possibly help the issue.

“We also know we are trying to attract new businesses to Prince Edward County but we know we don’t have housing here so we have to try and tackle that,” he added.

Destined to be a major infrastructure project that would be twice the amount the County spends on annually on road renewal, Quaiff confirmed senior staff would be exploring infrastructure grant programs to gain partnership.

“This project will have to rely heavily on Federal and Provincial funding and we know the Provincial Government requested this engineering study prior submitting any grant applications to the province,” Quaiff said.

“It needs to be addressed and it doesn’t make a lot of sense to have an intake in nine feet of water especially when we have an intake in Wellington that draws from Lake Ontario that we can haul from,” Quaiff said. “We need to explore connecting Picton to the Wellington intake.”

“We know we need to a certain number of beds to make it sustainable (125 beds up from the current offering of 84) and we have until 2025,” Quaiff said. “We’ve been in contact with Minister of Health Dr. Eric Hoskins and we’ve explained our position clearly that this community lost 70 some beds with the closure of Picton Manor and that we feel we deserve some of those beds back.”