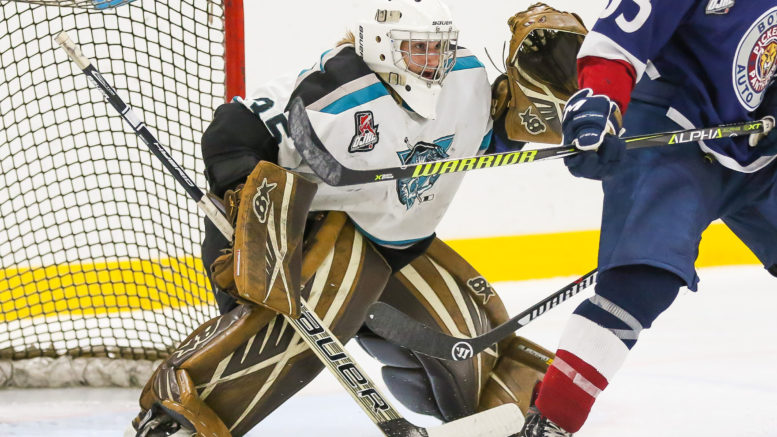 Like most junior hockey teams at the Jan. 10 Hockey Canada player acquisition deadline, the Wellington Dukes were scrambling.

But that description was likely more true locally given the club was forced to operate via “general manager by committee” given the recent front office shake-up.

In a few separate moves, the Dukes said good-bye to a slick rookie forward and added some goaltending depth as well as some grit to complement their forward group.

Forward Eric Uba was sent to the Oakville Blades on Tuesday.

The 17-year-old winger had nine goals and 13 points in 39 games for Wellington but wasn’t in the club’s plans for next season after the Kitchener native singed a contract with the Flint Firebirds over the holiday break and played a pair of Major Junior games.

There is little doubt Uba will in a Firebirds uniform this fall-or sooner.

“His parents wanted him to be closer to Flint so we made this move as a favour to them,” Wellington Dukes director of hockey operations Randy Uens told the Gazette. “It is not likely we would have him back next year so this deal made sense.”

In other moves taking place on Wednesday, Wellington added netminder Tyler Richardson from the Lindsay Muskies and assigned goalie Pierce Nelson to the Picton Pirates of the PJHL.

Having been the last and only line of defence for the last-place Muskies, Richardson’s stats aren’t exactly sparkling this season as he leads the OJHL in losses with 21.

But the Newmarket native also leads the loop in saves with 940, which is nearly 100 more than his nearest competitor which provides an idea on what kind of season it’s been for the Lindsay outfit.

“We’ve brought (Richardson) in to push Jonah Capriotti for the No. 1 spot,” Uens said. “In terms of (Nelson) we still see him as a Duke but we wanted him to get some playoff experience with the Pirates this season.”

Uens added the club still has one vacant roster sport available and are waiting to hear from some major junior teams on potential overage players.