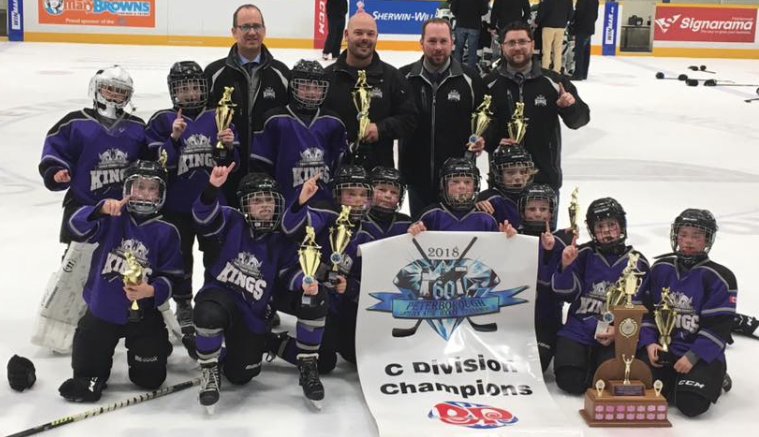 KINGS ADD ANOTHER CROWN- The Terpstra Equipment Atom BB Kings were the A final winner of the C Division at the 60th annual Peterborough Liftlock minor hockey tournament this weekend. (Submitted Photo)

The locals skated off Peterborough’s Memorial Centre ice Sunday afternoon as 2018 Liftlock C division champions after getting past the Parry Sound Shamrocks 2-1 in the A final and going undefeated the entire weekend.

The Kings have yet to taste defeat in tournament play and are a combined 17-0-2 when playing games outside of their OMHA regular season.

Whatever the reasons -will and desire, skill and a little luck- this local minor hockey club has delivered time and again when the stage gets large and the lights shine their brightest.

“We played really well and against some really good teams,” Kings coach Tod Lavender told the Gazette Monday. “I think winning makes it special but to be playing well and coming through this close to playoff time is nice.”

Played over three days throughout the Kawartha region, the Kings got things started on Friday with a 4-1 win over the Petawawa Patriots in Douro.

Despite outshooting the Pats badly, the game was scoreless into the third period when the Kings offence finally started to click and the locals lit the lamp four times.

On Saturday, the Kings met up with the Listowel Cyclones at the Evinrude Centre Peterborough and again the locals were in a tight contest.

Alex Lavender counted for the only Kings goal as the teams tied 1-1.

“They had us on the ropes pretty good in the final five minutes of the game but (goaltender) Lainey Van Vlack was there every time and our defence did a tremendous job making sure she could see the first shot,” Lavender added.

Later on, the Kings and the Durham Crusaders hooked up at the Bewdley Arena and with calculators in tow, the Kings bench staff had a good idea what was facing the club if they had any hopes of making the A final.

Kings centre Mitch Sills registered a hat trick for the locals and was honoured with a post-game award for his efforts.

The Kings took on the Strathroy Junior Rockets in the semi-finals on Sunday morning at the Kinsmen Rink in Peterborough and a back-and-forth contest game down to the last five minutes.

Alex Lavender tallied earlier for the Kings who found themselves down 2-1.

A Sills goal in the late going tied it and set the stage for a dramatic finish.

During a flurry in the Rockets zone, a Strathroy defenceman fell on the puck in the crease setting up a penalty shot for the Kings.

Charged with punching the Prince Edward County ticket to the finals, Sills made no mistake in depositing the puck into the Strathroy net to put the Kings ahead 3-2 with about two minutes to play.

“After the goal, we really worked hard on the forecheck and we really never gave Strathroy any good looks in the final two minutes,” Lavender said. “Everyone kind of rallied together and made sure we stayed strong on the forecheck.”

The win put the Kings up against the Shamrocks who must have been bleeding green with revenge after it was the Kings who shocked host Parry Sound in the final game of the Bobby Orr Hall of Fame Classic back in October.

“We’ve played them three times so far this season and every game has been a back and forth classic,” Lavender said.

Tied 1-1 late into the game, it was once again Sills who managed the heroics and put his team ahead to stay inside the final five minutes.

Defenceman Will Theakston was the chosen as player of the game in the final thanks to his strong play.

“The cool part is that the final was played on the same ice the Peterborough Petes play on and that’s not something the players are going to forget,” Lavender said. “We did remind them however that the ice is smaller than in Wellington and not to get to mesmerized by the lights and the seats.”

By Lavender’s figuring, Sunday’s win was the first by a local team at a Liftlock tourney since 1982 when a Wellington and District Minor Hockey squad captained by current assistant Kings coach Obie Van Vlack was the overall winners.

The Kings kick off their OMHA playoff series in Lindsay on Saturday and play Game Two on Sunday at 2:45 p.m. At Essroc Arena.