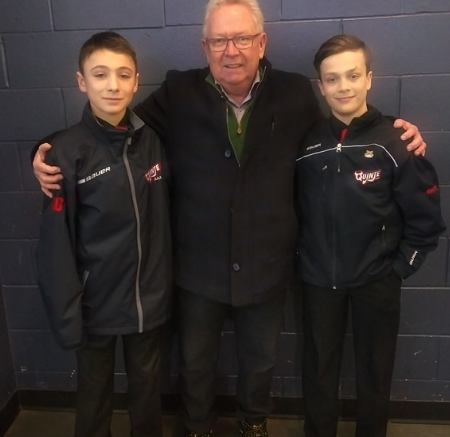 Country natives Ben Smith and Keenan Wiles and their Quinte Red Devils teammates took care of business on and off the ice Saturday, beating coach and former NHLer Gary Roberts and his Central Ontario Wolves 4-2 in the club’s ‘pink-in-the-rink’ fundraising game at the Quinte Health and Wellness Centre in Belleville.

The regional AAA squad is a semi-finalist in the 2018 Chevrolet Good Deeds Cup, a national community-minded challenge program for Peewee-aged hockey teams that rewards clubs that go above and beyond in the their home town by committing good and kind acts off the ice.

All told, the event raised $8,463 that was presented to the Canadian Cancer Society.

In addition to the pink-in-the-rink event, the club has served meals at retirement homes, cleaned up local parks and taken part in a clothing drive that will send items to a remote northern community.

Prince Edward County Mayor Robert Quaiff was among the dignitaries at the game and had an audience with Wiles and Smith and saluted their dedication, their community-mindedness and their skills.

Online voting for the Good Deeds Cup is available at http://www.chevrolet.ca/hockey/good-deeds-cup.html.

Supporters of the Red Devils can select the Quinte video and watch it as view totals will decide the winning team.

The winning club will be awarded $15,000 from Chevrolet to be donated to the team’s charity of choice.