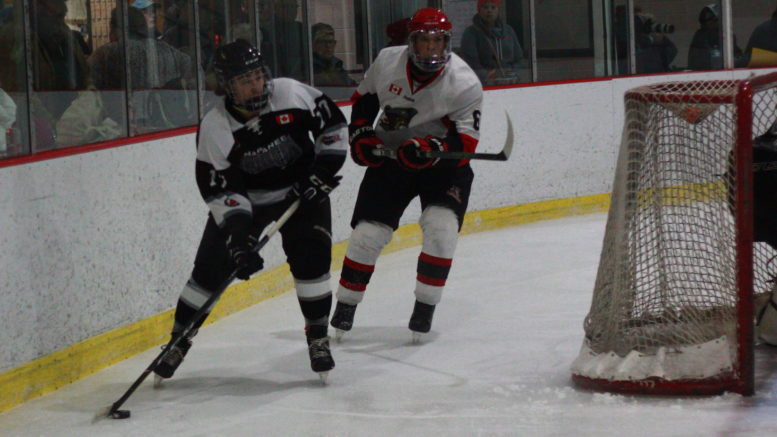 Napanee's Cullen Hinds collects the puck behind his own goal with Picton forward Nick Hoey a step behind during a Nov. 16 clash versus the Raiders. (Gazette file photo)

For the first time in recent memory, the Picton Pirates come out of a weekend without a point.

The club fell 6–0 to the Napanee Raiders last Thursday and again by a 3–2 margin in Amherstview on Sunday night.

The Pirates knew they would be short some bodies heading into the matchup with Napanee. Picton general manager Chris Masterson said forwards Gerald Bilker and Bailey Matthews sat with injuries while defencemen Nick Kyte and Matthew Scott were out of the lineup due to illness.

“I’m not making excuses, but we knew we were in tough,” Masterson said of facing first-place Napanee with a depleted lineup.

The Raiders got out to an early lead Thursday with Austin Labelle scoring 4:13 into the game. While both teams had their chances, the goal remained the difference through the first period.

While the shots were recorded at 13–5 in favour of the Raiders, Masterson said he liked the effort from his team.

“We actually had a really good first period,” he said. “We were battling really hard.”

The Pirates continued to play defensively, holding the Raiders to just nine shots in the middle frame, however, two of those opportunities found the twine. Jake Campbell doubled the lead at 14:27 and scored again to make it 3–0 with less than two minutes remaining in the period.

“At about 3–0, things kind of came unravelled,” Masterson said.

Entering the third period down by three, the short-staffed Pirates began to sink. Sebastian Kilcommons scored 1:25 into the third and Labelle scored his second of the night at 5:25 to put the game out of reach. Josh Murphy added another at 18:16 as the Raiders cruised to victory.

Picton goaltender Wes Werner made 40 saves in the losing effort.

“Napanee is obviously a great team and they’re going to be tough for anyone to beat — we knew we were in tough, but we didn’t have our ‘A’ lineup,” Masterson said. “We don’t come away from that game disappointed, that game is over and we forget about it.”

In Amherstview to face the Jets on Sunday night, the Pirates didn’t come out of the gate with as much jump as they might have wanted, but got better as the game went on.

“We came out a little slow in the first — but I thought we had a really good second and third period,” said Masterson. “Their goaltender kind of stole the game for them.”

The teams traded chances throughout the period, but ultimately it was Kyle Casford scoring with 58 seconds left in the first to put Amherstview in front. The shots were recorded at 19–16 in favour of the Jets in the period.

Amherstview doubled their lead to 2–0 on the strength of a James O’Brien goal 6:14 into the second period. Despite some solid chances, the Pirates were held off the scoresheet thanks to some good work in the Jets net from Alexei Masanko. The shots were 10–10 in the frame and 29–26 overall heading into the third.

“It’s the first time we’d seen (Masanko) and he was acrobatic in there for sure,” said Masterson. “He made a few diving saves (and) we lacked a little bit of hunger for loose pucks.”

Down by a pair to open the third, the Pirates elevated their play. Devin Morrison finally got Picton on the board with his goal at 8:55 of the third. Trey Maracle and Jordon Cannons had the assists. The score remained at 2–1 until the dying minutes of the period.

With Amherstview’s Jake Hogle serving two minutes for holding, the Pirates pulled their goaltender for an extra attacker. However, Ty Norman was able to send the puck into the open cage to increase the Jets lead to 3–1.

Even as the period ticked away, the Pirates didn’t quit. Just one minute later Nate Boomhower connected on a play from Tye Eaton and Maracle to cut the deficit to just a goal, but it would be all of the offence the Pirates could muster.

The shots were recorded at 15–2 in favour of Picton over the final 20 minutes.

“We obviously wanted the two points, but we also didn’t give up,” said Masterson. “…There was no quit and we dominated that third period, so there were a lot of positives to take from it.”

The game was the first of the season for a couple of Pirates.

The club welcomed goaltender Pierce Nelson from the Wellington Dukes. Nelson started nine games for Wellington this season, picking up five wins and a pair of losses with a 2.86 goals against average and a .908 save percentage.

While Masterson said no decisions have been made about what role Nelson might take on with the club, he said the goaltender brings a calm demeanour to the Picton cage.
“I coached Pierce in high school hockey three or four years ago and he’s obviously a very capable goalie,” he said. “He’s really calm in the net and I think the team feeds off that.”

“He contributed right away with a couple of assists,” said Masterson.

He said Maracle was unable to join the team to start the season due to work commitments, but could provide a boost up front heading down the stretch.

“We were happy to have him back,” he said. “He’s a year older, he didn’t show any signs of rust, and he showed he can be a pretty important player for us.”

The Pirates take on the Gananoque Islanders Thursday night at 7:30 before travelling to Napanee to face the Raiders on Sunday night at 7.