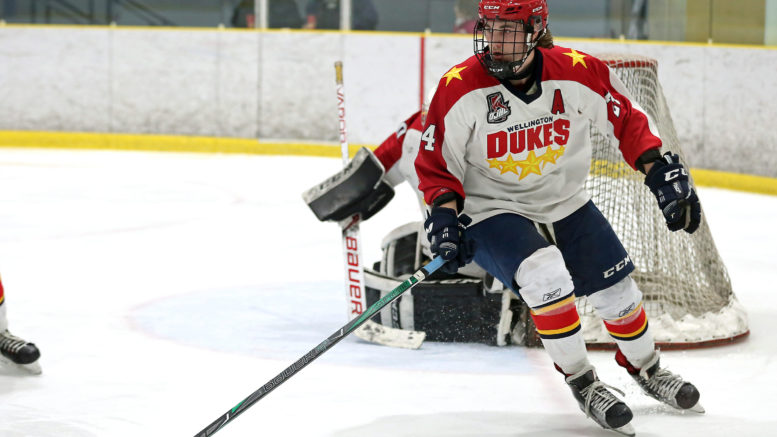 POWER FORWARD- Wellington Duke Jackson Arcan had a pair of goals including the game winner in a 4-3 win over the Orangeville Flyers Saturday. Wellington also bested Cobourg this weekend to become the first Northeastern Conference club to attain 60 points in 2017-18. (Photo by Ed McPherson / OJHL Images)

The first team in the Ontario Junior Hockey League’s Northeastern Conference to reach the 60 point plateau in 2017-2018 resides at Essroc Arena.

The Wellington Dukes took care of the Cobourg Cougars Sunday afternoon 5-2 to reach the 60 point mark and make it four wins in a row under new head coach John Druce.

The game on Sunday was the make up for the contest that was postponed early Friday due to poor driving conditions.

The Dukes also won Saturday night in Orangeville, holding off the host Flyers 4-3.

With the wins, Wellington (26-7-8, 60 points) maintains division leads on Kingston (44 points) and conference leads over Aurora and Newmarket (52 points).

Sunday’s win was a particularly chippy affair as the teams combined for 105 penalty minutes.

Wellington opened a 3-0 lead through 40 minutes of play thanks to goals by Ben Evans, Mitch Mendonca and Zach Uens.

But the Cougars clawed back early in the third stanza as Sam Delucia jammed home a loose puck just 2:08 into the third.

A nice powerplay feed at 4:37 from Jacob Black to Carson Gallagher made it 3-2 Wellington and gave the locals something to think about.

But not for long.

Off the ensuing faceoff, Wellington controlled the play and Mendonca restored the two goal margin as he collected an Evans feed and blasted it through Cougars starter Jorgen Johnson just 15 seconds after Cobourg had gotten to within one.

Just under three minutes later, Uens feed to the front of the Cobourg net was redirected by Teddy McGeen as the Windsor native made it 5-2 Wellington.

On Saturday, Wellington got a pair of goals from Jackson Arcan and newcomer Tyler Richardson made 23 stops in his Dukes debut.

Daniel Panetta and Dawson Ellis also scored for the Dukes who had to hold tight after Nathan Gooch got the hosts to within a goal in the late going.

Wellington travels to Newmarket Thursday evening and then hosts Kingston on Friday.

The locals are in Stoufville on Sunday afternoon.