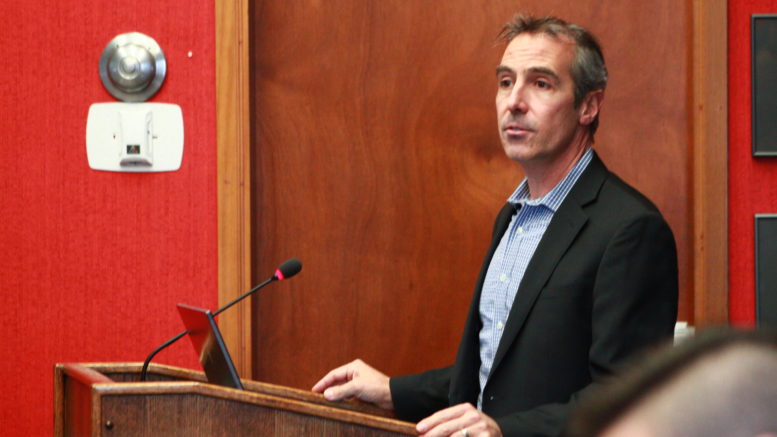 A Toronto company is gauging municipal and community interest in locating a marijuana processing facility in Picton while councillors are seeking more information.

Neucrop Growers Canada Ltd. president and CEO Paul Gillespie was at Shire Hall last week where he detailed plans for a new state-of-the-art facility that would process marijuana for products such as cannabis beverages, edibles, and topical ointments.

“Neucrop is more focused on processing than cultivation,” said Gillespie.

The company is searching for a two-acre site with or without an existing building. The preferred site would have hydro, water, and sewer services. The company has identified a short list of potential sites, including a parcel along MacDonald Drive in the Picton Industrial Park, as well as sites in Belleville, Quinte West, and Parry Sound.

The company sought some indication of whether there was interest in hosting the facility at the site and asked for any other level of support that should be taken into consideration when comparing potential sites. If council has interest and is willing to consider an offer on the property, Gillespie said the company would like a written of letter of support from council as well as local fire and police services to be used with its application.

“There’s a real opportunity in front of us,” Gillespie said.

Committee of the whole voted to refer the request to staff for a report which will detail the implications and opportunities for such a proposal. The report is expected to come back to council by Jan. 23.

Neucrop is seeking a site in a municipality that can aid in the application and development process, with the best appeal to Health Canada, with expansion opportunities, and with long-term financial attractiveness. A site that can be developed quickly is preferred. He said the building would be nondescript and would be strictly controlled with access only to those with Health Canada security clearance.

Recreational cannabis is set to be legalized in Canada in July 2018. There are currently 70 producer licensees under medical marijuana regulations. Health Canada introduced new license regulations in a discussion document in November that is set to be finalized this month. New license regulations are anticipated to be announced thereafter. The new regulations would include license categories such as standard and micro producer, standard and micro processor, import/export, sales, and industrial hemp production.

He said the company will be seeking approval for micro cultivation and standard processing.

“What’s not known at this point is, how big is micro? Will it be limited to the size of the facility, the number of sales, the number of plants — we’re not sure yet,” said Gillespie.
Gillespie said applications to Health Canada are based on address, which means site location will be a critical consideration. Things such as industrial or agricultural zoning, the ability to build a high-security facility, financial attractiveness, proximity to a skilled workforce, municipal services, and proximity to civic addresses will all need to be contemplated, he said.

There is a 500-metre guideline that is municipally driven. Gillespie said the site should be at least 500 metres from a civic address and should be acceptable and welcomed by the surrounding community. Sites located within 500 metres from a civic address would require a letter from the municipality stating the appropriateness and acceptance of the site.

“Health Canada wants to allow municipalities to opt out should there be issues around location — close to schools or other areas a municipality may object to,” said Gillespie.

The shortlisted site at the Picton Industrial Park is within 500 metres of PECI, Sonrise Christian Academy, The Hub Child and Family Centre, and Highland Shores Children’s Aid.

Gillespie said the site would not be accessible to the general public and no sales or tours would ever occur on the site.

Councillor Roy Pennell said his biggest concern was ensuring the site would be secure. He said he would support any endeavour that would bring quality jobs to the municipality.

“I wholeheartedly support anything that will bring some decent-paying jobs into the county,” he said.

Councillor David Harrison said council should have more information before moving forward. He said he would prefer not to consider the issue until there is a firm offer on the table and a public meeting held to discuss it.

“This is groundbreaking in the whole country,” he said. “…To jump into something too quick that could have more of a backlash than we realize, I can’t go for at this point.”