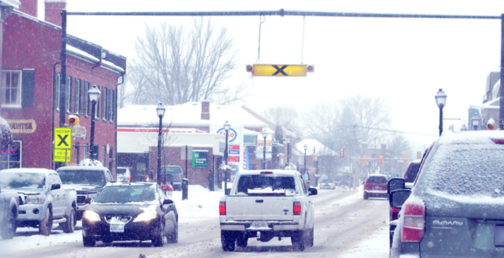 Getting across - Prince Edward County will study appropriate locations for crosswalks in Bloomfield and Wellington rather than the villages because it has safe crosswalks like the one pictured above at Main and Elizabeth streets. (Adam Bramburger/Gazette staff)

It looks like the municipality will be investigating the cost of a study to examine the need for crosswalks in Wellington and Bloomfield.

Following discussion at last week’s committee-of-the-whole meeting it appeared there was general support for a new crosswalk in the village. Subsequently, councillors supported a motion to have staff prepare a report on the cost of study which would identify the need and the most appropriate location for the crossing. If approved, the study may also examine the use of an existing crosswalk on Bloomfield’s Main Street.

The motion was tabled by councillor Jim Dunlop. He said in November a resident was struck by a pick-up truck after walking out from between two parked vehicles on Main Street in Wellington. The 75-year-old male was transported to Kingston General Hospital, but later succumbed to his injuries.

“If we had the crosswalk there, it may not have prevented what happened,” said Dunlop. “Whatever action we take we’re not going to get rid of the risk, but we may reduce the risk.”

He said the last time the issue had been studied was around a decade ago when concerned parents inquired about the lack of a Main Street crosswalk leading to C.M.L. Snider School. That study found there wasn’t enough traffic to justify the crossing.

“That was the time before the Drake Hotel and all the entrepreneurs that have come to the county,” said Dunlop.
He said these days Wellington’s Main Street is bustling with tourists, weekend farmer’s markets, and people crossing the road to reach the town hall, post office, or the park.

“Right now we’ve got local people going to Picton because it’s just to unsafe to travel up the street,” he said.

With a growing population of seniors and hundreds more homes on the way over the next 10 years, he said it’s appropriate to conduct another study which would determined the need and the appropriate location for a crosswalk.

“We have a responsibility as a municipality to be proactive,” he said. “We want all the businesses in the Main Street, but we don’t have the infrastructure in place to handle them.”

“I’m in Wellington every day and there are just accidents waiting to happen.,” he said. “Not only does Wellington have a large population of elderly people, it also has a large and growing population of young people, children.”
Gale suggested that while looking at the Wellington crosswalk, the study could also examine the need for a Main Street crosswalk in Bloomfield which had primarily been used by students on their way to Pinecrest Memorial Elementary School. The school closed in June and Gale said it seems underutilized.

“A report is in order, the last one was about 12 years ago and Wellington was a lot different than it is now,” he said.

He said it wouldn’t take long to get some estimates for the cost to conduct the study. Staff would then come back to council for permission to spend the money.

“The study itself would happen in the summer with the results of that study being available some time in the fall,” he said.

He said in 2016 the province issued new regulations for pedestrian crosswalks which would allow new types of crossings that could be installed for less cost that those that have been commonly used. He said there are also traffic-calming measures that are suggested with those types of crosswalks that could increase safety.

He agreed the study could also assess the use of the Bloomfield crosswalk.

“I would hope to look at that intersection and see whether that is justified there and, if it is, we would take the appropriate steps to make that a crosswalk as well,” he said.