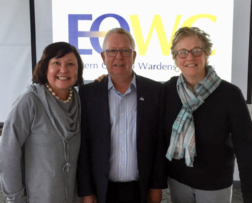 In a news release, Quaiff called it “an honour and privilege” to serve and expressed his confidence in the new leadership team taking his place.

“Under this strong leadership team, I am certain that EOWC will continue to improve service delivery, remove financial burdens, and encourage growth and economic development opportunities in our region.”

Jones indicated the EOWC has two priorities for the year ahead. The first is building the Eastern Ontario Regional Network’s cellular and public safety broadband network by taking a $299-million business case to federal and provincial representatives. The plan aims to close cellular network gaps across the region and improve capacity for residents and first responders during emergencies.

The second is the implementation of the Eastern Ontario Economic Development Strategy, which the EOWC says is the first regional strategy of its kind across Ontario. It would addresss future economic development needs through workforce development and deployment, technology integration and innovation, and integrated, intelligent transport systems.

“For this critical election year, the EOWC has kept its focus simple and identified the two most important projects for eastern Ontario. The rest of the year — and specifically the next few months — will be spent on advocating at the provincial and federal government levels for multi-stakeholder solutions to these proposals,” Jones said.