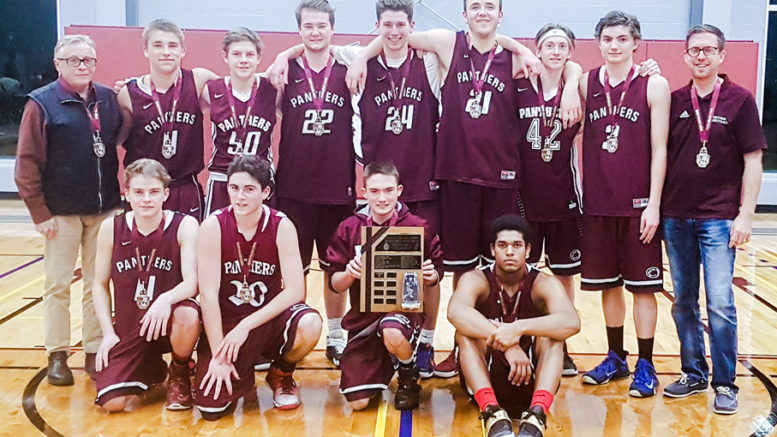 Champions - The PECI Senior Basketball Panthers have struggled to find consistency at times this season, but they kept getting better over the course of three games last weekend to go unbeaten at a tournament at Port Hope’s Trinity College. They’ll look to build on that going into the exam break. (Submitted photo)

After battling for a one-point win in their opening game, the PECI Senior Basketball Panthers kept getting better as they swept to a win in tournament play at Port Hope’s Trinity College last weekend.

The Panthers tipped off the event against the athletic Appleby College Greyhounds from Ottawa. Coach Rob Garden said his charges did a good job early getting back in defence to prevent Appleby’s speed.

Big man Brodie Byford put up nine tough points by half and it looked like the Panthers were in control, up 24-18 at the break. Things changed in the second half, however.

“Like we have done far too often this season, we took our foot off the gas in the third quarter and Appleby started to grab the momentum,” Garden said.

With just 24 seconds left, the Greyhounds went ahead 47-44 with a wide-open basket from beyond the three-point arc.
On an inbound play seven seconds later, Johnny McHugh was fouled and was given three free throws. He hit the first and missed the second. PECI called timeout and, Garden says, the sniper was instructed to intentionally miss to set up a two-point play to tie.

“There aren’t too many times in a basketball game where a coach would ever call a miss beautiful, but this one was perfect,’ Garden recalled. The ball clanged off the rim and Byford and Alex Arsenault did a good job boxing out to get possession. Twice, the Panthers got the ball back into McHugh’s hand. With six seconds left, he hit a fade-away three-pointer to get a one-point lead.

Appleby would get back down the court for a layup opportunity and foul. Their shooter missed and the Panthers were up a game.

The second game of the weekend proved fairly anti-climactic after that drama as the Panthers’ would-be opponent pulled out of the event due to weather. The Panthers faced the Trinity Bears’ junior varsity team instead. It was an easy 52-34 win for PECI and a valuable learning experience for the young squad.

The big Bears came next, however, and Garden figured the seniors wouldn’t be as easy to tame as their brethren.

“Trinity College is a top team in the CISSA so we knew we would have our hands full,” he said.

Defence has long been a hallmark for the Panthers, however, and they felt it could be a difference in the final.

The coach explained his team would have to limit the Bears’ guards from penetrating the middle of the court, forcing long shots from the outside.

The Panthers delivered in a 52-34 decision. In particular, Garden felt the first half of the contest was the best his team has played.

“We played really aggressive half-court defence, including three charging fouls. We rebounded with a purpose and only turned the ball over two times. We also hit a season-high eight three-pointers in the first half,” he said.

With an 11-point lead in the third, the Panthers focused on remaining aggressive and not backing off. Though the Panthers haven’t played well with leads earlier this year, it worked this weekend.

“Trinity College threw everything they had at us and we rose to the challenge,” Garden said.

McHugh and Arsenault outscored the entire Bears team 16-11 in the second half and the Panthers got contributions across the board.

“Overall, it was a great team effort to kick off the second half of our season,” Garden said.

The Panthers were to head into the exam break with a game against Centennial last night after press time.