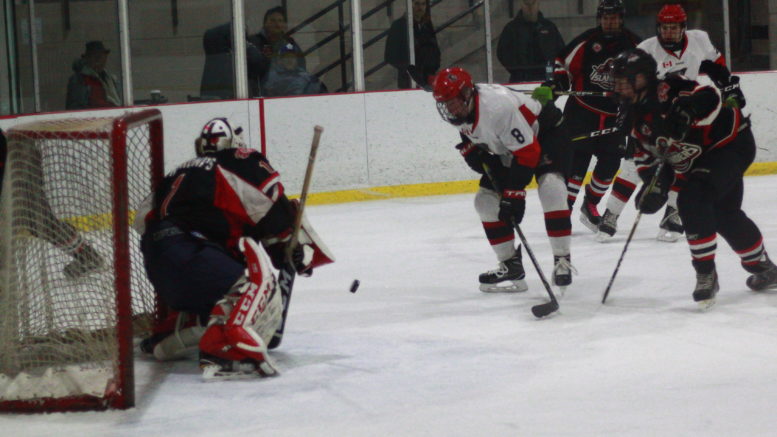 The team pulled out a 4–3 win over the Islanders, but fell to the Raiders 6–2. With seven games remaining on their regular season schedule, the Pirates remain in third place in the PJHL’s Tod Division with a 20-12-1-0 record for 41 points.

While the club is closing in on locking down third place and setting up a likely first round playoff matchup with the Port Hope Panthers, general manager Chris Masterson said the team has been in a lull over the last couple of weeks.

“We’re not firing on all cylinders right now, we’re not at our best,” he said.

Regardless, there were some positives to take out of Thursday’s game, Masterson said.

“Thursday was good because we didn’t bring our best effort, but we managed to do what we had to do to get the two points and that’s always the sign of a good team,” he said.

The Islanders managed to pull ahead quickly with Keegan Wayte scoring just 1:20 into the opening frame.

The Pirates were undaunted. Under two minutes later Jordon Cannons carried the puck into the Gananoque zone. His long shot hit goaltender Josh Rowden, flipping up into the air where it was batted into the net by Devin Morrison. Kurtis Wood also picked up an assist on the tying goal.

From there Picton continued to build momentum and took the lead at 12:36 when another rebound off of Rowden resulted in a melee in the crease. Cannons shovelled the puck past the sprawling goaltender to make it 2–1. Morrison collected an assist on the play.

Just over three minutes later, Cannons struck again when another tough rebound bounced to him at the side of the net for a tap in.

Masterson said it was a great response after being down early in the frame.

“We felt fairly confident it was just a little blip on the radar and we’d be OK,” he said.

The Pirates entered the second with a 3–1 lead, but just 22 seconds into period Braedyn Asselstine cut the deficit to one with a power-play goal. The two-goal lead was restored at 6:49 with Riley Manion scoring from Tyson Cassidy and Chase Burden.

The Pirates entered the third with a 4–2 advantage, but again the Islanders closed the gap with Adrien Mindjimba scoring 5:54 into the final frame. Gananoque out-shot Picton 17–14 over the final 20 minutes, but neither team found the back of the net for the remainder of the contest.

“The third period was where we were a bit more concerned about the response,” Masterson said. “I don’t think we had our best effort in the third, but we did manage to hold on and Wes (Werner) made some key saves down the stretch for us.”

Despite the score, Masterson said the team had a better effort on Sunday versus the Raiders.

Napanee took the lead 2:59 into the game with Zach Wheeler scoring. Just over two minutes later it was 2–0 with Ryan Casselman scoring shorthanded.

While the goal could have been a deflating one, the Pirates pushed on. With less than three minutes remaining Trey Maracle cut the Raiders’ lead in half. Morrison and Nate Boomhower notched assists on the play.

Masterson said the Pirates got into some penalty trouble in the frame and mistakes led to goals.

“You make six mistakes against Napanee and you end up with six goals against you,” he said. “That’s just how good they are — you have to play mistake-free hockey against them.”

Boomhower managed to find the back of the net on a Picton power play 4:37 into the third, but a Reed Kekewich goal two minutes later negated the tally and the Raiders rolled to victory.

“(Sunday’s) game was not a 6–2 game in terms of effort,” Masterson said. “It was more of just some mistakes and they capitalized.”

Asked how the Pirates can work to limit those types of mistakes against the first-place Raiders, Masterson said it’s something that the club’s coaching staff have been preaching and working on in practice and many of those mistakes can be pinpointed to discipline.

“Discipline is not just penalties, it’s also the discipline to do things the right way, to pay attention to details, things like faceoff alignments and knowing your role on the faceoff,” he said.

He said one goal in particular resulted from a two-on-one chance after a faceoff in the offensive zone.

“That’s an example of the kind of discipline that’s needed, the attention to detail,” he said. “That’s lacking at times.”

While the physical effort was there and the team was working hard to create chances, the team gave up scoring opportunities due to some mental lapses.

The Pirates take on the Amherstview Jets Thursday night at 7:30 before visiting the Islanders in Gananoque on Sunday evening at 7.

Masterson said the Jets have a solid ‘D’ corps and new goaltender Alexi Masanko has been solid for the club. That means it will be important for the Pirates to focus on limiting the Jets’ offensive opportunities.

“You’re not going to score a ton against them,” he said. “We’ll look to play well defensively, capitalize on the chances we get, put a lot of pucks on net, and get some traffic in front.”