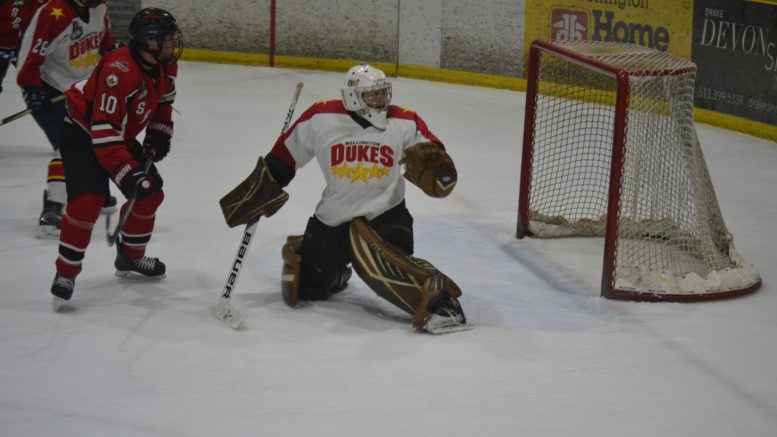 BACKSTOPPED- Dukes netminder Tyler Richardson kicks away one of 24 pucks sent his way during Wellington's 5-0 win over visiting Stoufville Sunday. It was Richardson's first start on Essroc Arena ice since being acquired from the Lindsay Muskies earlier this month. (Jason Parks/Gazette Staff)

The Wellington Dukes continue to chip away at the field of the OJHL’s North-East Conference and are discovering as much about themselves as the competition.

Wellington started the weekend off with a 2-0 setback to the hard-charging host Newmarket Hurricanes before righting the ship and scoring decisive home wins over Kingston and Stouffville.

The wins push Wellington (28-8-8, 64 points) even farther afield in the East Division and the Dukes are now 14 points clear of second-place Kingston as the regular season games dwindle to a precious few.

In terms of storylines this weekend, Wellington was taught a couple of key lessons.

In Newmarket against a well structured Hurricanes club, Wellington saw that minor miscues at inopportune times can be problematic even if a good team effort is put forth.

On Friday in a 6-1 win over Kingston, the Dukes saw the importance of sticking to the game plan and maintaining focus when it seems like the whole world is coming undone around you.

And on Sunday, it was a well-worn lesson plan as the club set aside a poor opening 20 minutes to quell the Spirit 5-0.

As to whether head coach John Druce can make these findings stick to the club’s collective psyche will remain to be seen as they could be valuable bits of information when the stakes grow higher in the post season.

Wellington and Newmarket played it even until partway through the game Thursday when Wellington starter Jonah Capriotti made a save but the rebound found Eric Eremita’s stick and the OJHL vet bagged his seventh of the season.

A similar play netted Newmarket’s second goal that came in the late going of the third and effectively put Wellington to bed.

Reports from an eyewitness dispute Wellington was as outshot as the game sheet indicates (49-24 in favour of the Canes) and Druce called the contest a “Good game to play in and see where we are at.”

“They are a very well-structured team that plays a tight game so to go into that rink and play it that close was a great indication as to where we are in our play and that we are getting better defensively,” Druce told the Gazette Monday. “It goes to show we need to be able to play a certain type of game in order to beat teams like that and it was a good learning experience for this group.”

A refocused and energized Wellington unit that suffered its first loss in 2018 the night prior took to the Essroc Arena ice on Friday and even an early setback wasn’t about to come between the hosts and two very valuable points.

Tasked with killing an early five-on-three power-play situation, Kingston Voyageurs star Rob Clerc settled behind Capriotti and then scored a lacrosse-style goal, scooping the puck up with his stick and beating the Dukes netminder to the post just 61 seconds in.

But any Voyageur fan settling into a seat would have been better served to return to their conveyance and head back to the Limestone City as there was precious little to cheer from that point forward.

“That game was a result of what happened Thursday,” Druce said “We found out that if play at a certain level of intensity and tempo and do the little things, we can be successful.”

Just over two minutes after Kingston opened the scoring, Colin Doyle fed Ben Evans behind the net for a wrap around goal to tie it after a two-on-one rush just missed.

A little later, Teddy McGeen swept home a power-play goal after a nice feed from Evans and Wellington never trailed after 5:33 of the first.

Evans used Nelson Powers as a decoy on another odd man rush just 1:26 into the middle frame. After the midway point, Andrew Rinaldi banked home a power-play goal at 11:04 and then Jackson Arcan deflected a Declan Carlile point blast at 18:18 to give Wellington a 5-1 lead through two.

The final sequence in the second set the powder keg for the third period however as Kingston forward Austin Grzenia and Wellington defender Geoff Lawson collided at the Dukes net and became embroiled in a scuffle.

Grzenia and Lawson both had issues with their headwear after the scuffle and both were assessed misconducts with Lawson getting a gross misconduct and three game suspension for doffing his helmet aside as he skated back to the dressing room.

The game got silly and borderline dangerous in the third as Wellington and Kingston marched continuously to the penalty box.

Spearing double minors to both sides as well as a major head check by Kingston forward Danny Reidel on Evans were among the regrettable offences of the third.

Even as time wore down, Kingston’s Aidan McFarland cross checked Powers in the face off the draw at 17:05, not even attempting to play the puck and earning a major and a one-game suspension for his troubles.

Wellington’s Zach Uens scored a power-play goal off a nice Jeff Burridge feed to finalize the scoring at 6-1.

On Sunday, Wellington needed 20 minutes to get rolling against a Stouffville club that was missing head coach Jeff Perrin due to a gross misconduct he incurred the day prior in a 7-5 loss to Trenton.

Outshot and out worked, Wellington regrouped in the first intermission and Druce said starting the games on time is an aspect that needs to be addressed.

“(Poor starts) are something we are trying to address and players need to be aware that starting to play after the first isn’t acceptable,” Druce said. “As a staff, we were not happy with the first period.”

Wellington was more inspired in the second and outshot the Spirit 18-6.

Graeme McCrory scored at 9:32 to give Wellington an edge they wouldn’t relinquish.

Wellington’s Tyler Richardson has been on the wrong end of a number of shutouts and lopsided losses due to his time in Lindsay.

On Sunday, his fortunes were reversed and the Newmarket native stopped all 24 shots for his first OJHL shutout in nearly four seasons.

“We knew that he is going to work hard and battle when we acquired him from Lindsay and this was his first start at home,” Druce noted “Coming into a team that has the record we do there’s some added pressure and I’m sure it’s an adjustment but the players were all pretty happy for him afterwards and it was nice to see him pick up the shutout.”

Another player that’s got a new life in the new year has been forward Dawson Ellis.

The slight first-year Duke languished under the previous coaching regime however the Campbellford speedster seems to have found a home in Druce’s system.

“From Day 1, he’s done everything that’s been asked and has caught on quick. He’s a very effective penalty killer, he has speed, he reads the ice very well and his work ethic is being rewarded.

Panetta has been a real compliment to that line as well,” Druce said.

Wellington welcomes Aurora on Friday evening and then hosts a makeup game next Wednesday as Newmarket makes a rare mid-week appearance at Essroc Arena.