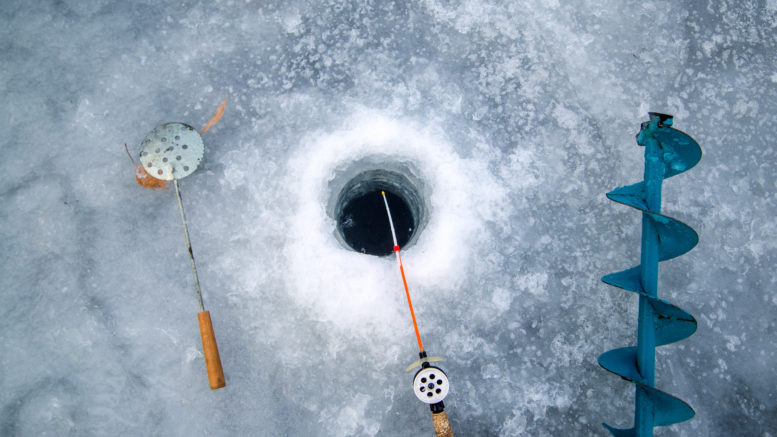 The derby kicks off Friday, Feb. 9 at dusk and runs until Sunday, Feb. 11. While the event draws serious anglers from as far away as Quebec and the United States, it has become well known for hosting all sorts of fun games on the ice.

Event co-ordinator Kim Lavers Mulrooney said while the serious anglers get started Friday night, the on-ice games open to the public on Saturday, Feb. 10 at 1 p.m.

Lavers Mulrooney said Merland Park strives to bring something a little different to the event beyond the standard derby.

“Way back when we first started, a lot of the anglers would come in for lunch on the Saturday and we would just have some stuff going on on the ice just to change it up a little bit — especially if maybe the fishing wasn’t great one year,” she said. “We would have some other events for them to do and then it just spiralled from there.”

She said the on-ice shenanigans seemed to catch the attention of neighbours who would often venture out on the ice to cheer on the anglers. Subsequently, the event was opened to the public to participate in the games for a $20 fee that would go to support the local Kiwanis Club’s Terrific Kids program.

Merland Park owners Kevin and Jennifer Lavers felt the local organization was a good fit and they were familiar with the program as their own son had been a beneficiary.

Games include the popular Shirt Off-Fish On where participants brave the cold with no shirt for at least five minutes. The first 15 fish caught win a prize.

The event will also feature washer toss, ladder ball, and a donut eating contest for kids.

In addition to some of the returning favourites, this year’s event will feature a new game. Participants will place a tennis ball in a fishnet stocking, then pull the stocking onto their head. Participants will race, two at a time, to knock down five water bottles spaced two feet apart using the tennis ball. Each participant will be timed and the two best times will win a prize.

While it’s all in good fun, there are a couple of aspects of the event that are particularly rewarding for Merland Park, said Lavers Mulrooney

“It’s being able to write a cheque to Kiwanis and support a really great program, but the other part is being able to get everybody outside in the winter doing fun activities when it’s a time of year a lot of people like to stay secluded in the warmth of their homes,” she said. “That’s a big one.”

Tickets to enter the derby are $300 and include accommodation for two nights, a steak dinner Friday night and a Saturday night fish fry. On-ice games begin Saturday at 1 p.m. and are open to the public for a $20 entry fee. All proceeds go to the Kiwanis Club of Picton.