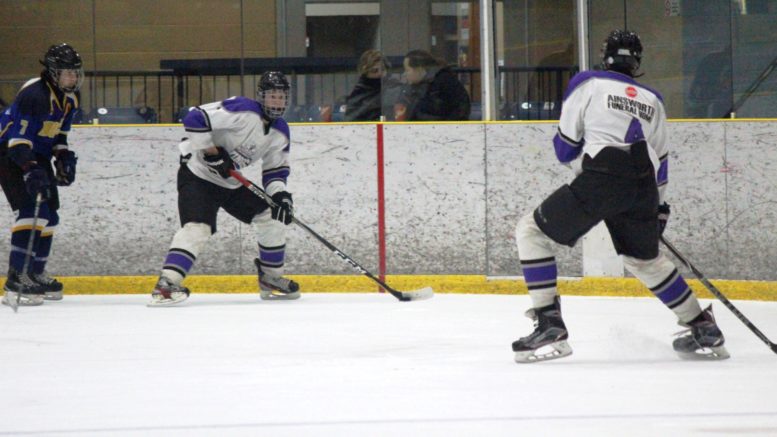 KINGS ON THE MOVE- Ainsworth Funeral Home Midget BB Kings forward Wyatt Gilbert looks to pass the puck to defenceman Braeden Kelly during the Kings 7-2 win over Stirling Sunday. Gilbert had three goals including a game winner with under 30 seconds to play in the Kings' 4-3 win in Game Two a day prior. (Submitted Photo) Here’s an update the post season so far for the four County Kings teams competing for All-Ontario BB Championship births:

•The County Farm Centre Novice BB Kings suffered a 5-2 setback to the Ennismore Eagles in the opening game of their seven team, double round robin schedule. Ryker Wood and Mason Lloyd had the Kings goals. The locals will be tasked with playing three games in three days this weekend.

On Friday at 6:45 at Huff Estates Arena in Picton, the Kings host Napanee.

On Saturday, the Kings travel to Stirling to play the Blues.

Sunday, the Kings are back home to welcome the Newcastle Stars at Huff Estates Arena for a 3:00 p.m. Puck drop.

•The Terpstra Equipment Atom BB Kings find themselves in a series with the Lindsay Muskies as the clubs split last weekend.

On Saturday, the Kings skated by the host Muskies 2-1 thanks to a late goal by Alex Lavender. Griffin Lavender also tallied for the Kings.

But on Sunday in Wellington, the Kings squandered a 2-0 lead in the third period to fall 3-2.

Hayden Bender and Alex Lavender had the Kings goals.

The Kings look to get back in the driver seat on Saturday in Lindsay. On Sunday, the Kings are back in Wellington for a 1:30 p.m. Date with the Muskies.

•The Terra Vista Pee Wee BB Kings will build on a thrilling game three overtime win in their series against the Lindsay Muskies when they take to the ice for Game Four on Saturday afternoon.

With the series tied 1-1, the Kings spotted the Muskies an early 1-0 lead as the Fish scored in the opening 30 seconds.

The Muskies added to that lead in the second but the locals and namely Resse Klienstueber got the club back into the game with a natural hat trick. Nathan Steen and Gerrit Kempers added helpers on Klienstueber’s supernatural effort.

The Kings were spurred on by the netminding as Austin Stock made an outstanding glove save late in the second period.

The Muskies bagged a powerplay goal late in the game to tie it but the Kings prevailed in the extra session.

A fantastic rush by Liam Rice set up a chance where the mobile defender clanked a puck off the post.

On the ensuing draw, the Kings held the zone and worked a cycle play where Klienstueber found Kempers in the slot and the Ameliasburgh native made no mistake lifting his team to victory.

The Kings will look to polish off the Muskies in the six point series on Saturday at 5:30 at Essroc Arena in Wellington.

•The Lehigh Cement Bantam BB Kings have a three-games-to-none strangle hold on the Stirling Blues.

The Kings and netminder Nolan Lane blanked the Blues 4-0 in Game One on Jan 14.

In Game two on Saturday, the Kings were forced to work overtime but Aiden Reddick had the game winner in the extra session to put the Kings up two games.

On Sunday, the Kings were able to cruise to 6-2 win in Game Three thanks to a Parker Mattis hat trick and move into a position to clinch in Game Four on Saturday evening in Stirling

If the fifth game is required in the series, it would be played on Sunday at 3 p.m. In Wellington. •The Ainsworth Funeral Home Midget BB Kings could give Stirling a serious case of the post-season blues on Saturday night as the locals are in a position to sweep.

The Kings got off to a great start in Game One in Picton Mon., Jan 15 as they rolled to a 5-1 victory.

Cole St. Pierre had a pair of goals including a penalty shot marker.

Game Two in Stirling on Saturday was a tighter affair.

With time winding down, Wyatt Gilbert blasted home his third of the night with just 30 seconds left to push the Kings ahead 4-3 and the locals would escape Hockeyville with win.

On Sunday in Wellington, the Kings scored early and often en route to a 7-2 Game Three win.

Alex Brady had a pair of goals.

So far in the series, the Kings have enjoyed offence from all three forward lines and have gotten solid contributions from affiliated players Thomas Davies, Kaleb Stacey and Nolan Steen.

The Kings are in Stirling with the series on their collective stick Saturday night.

If the Blues respond, the Game Five will be Sunday at 3 p.m. At Essroc Arena in Wellington.

All County Kings OMHA post season series scores and updates can be found at https://pecmha.com/Playoffs/