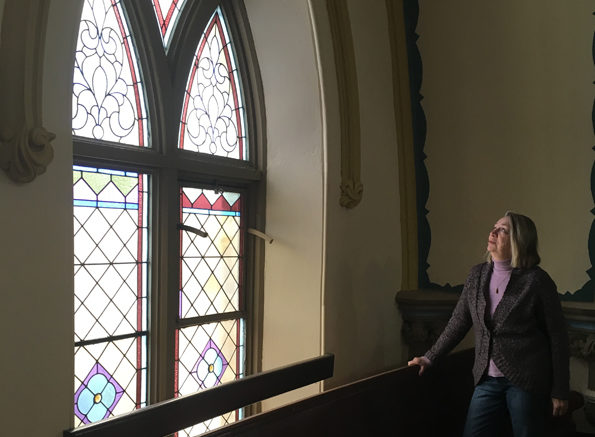 Preserving panes -Picton United Church property and building committee chair Dianne Hadley studies one of the Victorian windows slated to be restored in the near future. (Adam Bramburger/Gazette staff)

London firm begins work at cost upwards of $15,000 per window

Picton United Church has started a process to restore a series of two-storey Victorian-era stained cathedral glass windows believed to part of the original church built in 1898.

Dianne Hadley, the chair of the church’s property and finance committee, says committee members noted the deteriorating condition of one of the windows and its wooden frame and placed it on a repair list. That prompted further research into the state of the windows Hadley estimated hadn’t been examined in more than 20 years.

“After considering temporary fixes or ‘Band-aids,’ we decided to pursue professionals to assess the overall condition,” she said. Two companies were consulted and Hadley said the committee was impressed with the work of Roger Chapman, of Sunrise Stained Glass from London, Ont. who spent several hours in the church cataloguing and inspecting its 16 windows.

“He looked over each window inside and out,” said Hadley. “We were very impressed with his report.” Upon Chapman’s advice, the church has created a long-term plan for stained glass restoration. Already, it has earned a $5,000 grant from The County Foundation’s Built Heritage Fund, received some dedicated bequests for the project, and earmarked other fundraised dollars for the work. Chapman will be working to restore one window at a time.

The large windows are comprised of several different panes of glass, held in place by a casing known as lead came. Exposure to sun can cause the glass and lead to expand over time and with only a set amount of room inside a frame, they’ll bulge or buckle instead of sitting flat. In the case of Picton United, Hadley said a glazing covering the windows has appeared to further exacerbate the decay because of its impact on the wooden frames surrounding them. Better venting has been recommended.

“What happens is the frame starts to rot and sink a little bit and all the caning goes with it,” she said. “He said in the description that the way these were glazed initially, they didn’t leave any airspace. That condensation is helping to rot the wood. If flies get in or anything like that, there’s debris. It accelerates it.”

According to Hadley, the five windows on the west side of the church are in the worst condition because they see the most sun. Also, on the north and east walls on the lower level of the church, some of the windows were replaced before the building received a heritage designation. Between 1969 and 1987, Robert McCausland Studios in Toronto was contracted to design and fabricate those bright painted windows, many featuring scenes involving Christ.

That designation ensures, however, the remaining patterned cathedral glass windows, each adorned with a different faith symbol at the top — the all-seeing eye of God, the cross and crown, the Bible, the anchor, the vine and grapes, a sheaf of wheat, and the letters Alpha and Omega — must remain.

The second storey on the north and east walls also may require work. Late last year, Sunrise removed the window on the west wall closest to the front of the Akron-style auditorium to repair it.

“They have come and taken it out. They take pictures of it. They will take it all apart and re-do all the caning in between. If there’s any glass that will need to be repaired, they’ll do it at the same time and change all the glazing to a more modern system,” Hadley said.

The estimated cost for each window is between $15,000 to $20,000. Hadley said she was unsure of the timeline as it will depend both on the condition Sunrise finds the windows in and on the church’s ability to fundraise more money to pay for the project. In the past, the community at large has also shown interest in assisting in helping the small congregation of the 225-year-old church preserve the county’s largest meeting space.

“We’ve been very lucky in the past,” Hadley said. “When we needed to put a roof on, we had people coming straight from the community — not necessarily our members — just to make donations. I think the community has been very good to us.”

In 2010, Chapman was quoted in the London Free Press suggesting similar lead-cased stained glass windows have an average lifespan of 75-100 years. Having seen the windows outlive that estimate, Hadley is hopeful this restoration will offer similar longevity.