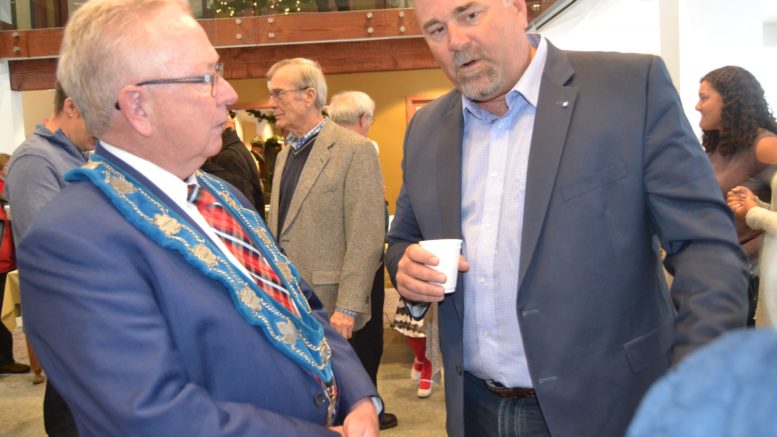 The goal to ensure all the pieces are in place for a proposed commercial kitchen that will serve the community and give Sophiasburgh Central School critical mass has support from politicians serving Prince Edward County at all three levels of government.

Bay of Quinte MP Neil Ellis, Prince Edward-Hastings MPP Todd Smith and Prince Edward County Mayor Robert Quaiff attended an information session hosted by the County Food Hub Group at Sophiasburgh Town Hall in Demorestville on Wednesday night and told the 50 or so supporters, parents and potential users of the kitchen space that the project has their support.

The concept is part of stipulations laid out by the Hastings and Prince Edward District School Board at the close of the 2016-2017 school year in which an Accommodation Review Committee process led to the school potentially being consolidated with a Kindergarten-to-Grade 12 school at PECI.

Public school board trustees listened to the impassioned pleas from the Sophiasburgh community and allowed them time to create a community hub proposal that would eliminate excess space, enhance learning opportunities and offer intriguing curriculum.

Organizers unveiled more detailed plans and updated the community both on their progress so far as well as their fundraising needs in advance of the May 1 deadline to meet all  conditions laid out by the board.

In total, the group is going to need $905,000 to transform the west side of the school into shared commercial kitchen and business incubation space.

The County Food Hub group has secured around $40,000 in per-annum leasing and rental usage pledges without any type of canvassing or advertising, leading the group to believe this is a concept that can grow, prosper and eventually become self-sustaining if not profitable.

Ellis applauded the group organizing the hub and said the mandate was in line with a serious issue facing many Canadians.

“Food insecurity in Canada and in our riding is a major challenge and home grown solutions like this proposal will go a long way in answering that challenge,” Ellis said.

Smith said the issue of potentially losing a community school in Sophiasburgh  was important and that the community had answered the call during the ARC process.

The opposition MPP added the Ontario PC party has been concerned about the impact school closures will have on rural Ontario, a figure which was originally planned to be around 600.

“Because of efforts like yours across the province of Ontario, 300 schools are staying open and we want to make sure this one stays open permanently and this school does not leave this community,” Smith said. “The County Food Hub group is  making sure there’s a viable use for this school. In conversation with Minister of Infrastructure Bob Chiarelli, I know he knows about this concept and admits it is very interesting. I know it will be one that will be supported by all three levels of government and together we all can keep Sophiasburgh open and viable”

Quaiff is enthused about the prospects for making a commercial culinary centre and class room a reality at Sophiasburgh and said that ministers heading the areas of the provincial government that would need to support the concept are already well informed of the idea-by a pair of heavy hitters once involved in Ontario bureaucracy.

“We had a really good meeting and  Minister Chiarelli is up to speed on the County Food Hub thanks to former deputy minister of education Dr. Charles Pascal and former finance minister Greg Sorbara (now both current Sophiasburgh residents),” Quaiff said. “These gentlemen have opened a lot of doors for us.”

Thanks to the support by former Liberal party members, the municipality has good contacts with senior policy analysts in both the infrastrutuce and education portfolios that can be utilized as resources.

“The minister of education knew the portfolio and the file, knew about the angst in the community over the school closures. We now have a resource in that ministry,” Quaiff added.

On a lighter note, Quaiff said as the delegation was wrapping up, he told the Minister of Education that she had to help him.

“’You have no idea what pressure is when you have Greg Sorbara and Dr. Charles Pascal living in the same area of a potential school closure’,” Quaiff told  Naidoo-Harris. “All the senior members of the ministry threw up their hands and ‘Oh yes, we know them well’. (Sophiasburgh) has been been very well represented.”

Pascal passed along this thoughts on the project via Roberts and said this was another example of the innovative Prince Edward County.

“This County Food Hub concept and how it’s developing is a superb example of diverse community partnerships coming together to support economic, social and educational aspirations,” Pascal wrote. “As a former deputy minister of education, I’ve always supported the strengthening of relationship between our schools and our communities-let the County lead the way.”

Roberts added the fact the community and representatives of all three branches of government are pulling in the same direction to make this proposal a reality is telling.

“This concept is so unique and it speaks to not only rural education but it speaks to food insecurity, it speaks to agri-tourism and agri-business, to our farming community and it speaks to giving our students the best experiential learning opportunity available in terms of nutrition, food and improved curriculum,” Roberts added.