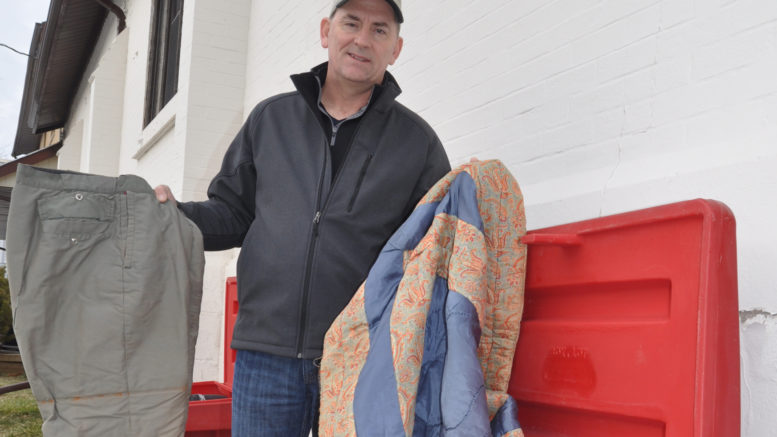 Offering warmth - HOPE Centre pastor David Inch shows off a pair of snow pants and a blanket people in need of warmth can take from a box outside the church. (Adam Bramburger/Gazette staff)

On the south side of the HOPE Centre at the corner of Elizabeth and King streets, an outer concrete wall offers an alcove to a basement entry near the convergence of a set of stairs and an access ramp.

Many pass by it daily without a second glance. Others, who have no place to be, see it as an opportune place to find shelter through winterly cold and winds at night.

David Inch, the pastor at the former First Baptist Church, says he’s been told homeless people sleep there from time to time. One, he said, is a friend. Inch said he has no problem with people seeking refuge on the church’s property, but he feels more could be done to truly help those in need.

With that in mind, the HOPE Centre has installed two bright red plastic bins not far from the alcove. Passers by might think they’re there to hold salt for the parking lot or keep refuse out of view, but upon opening, they’ll discover donated blankets, sleeping bags, and snow pants people can take.

“It’s not a solution, it’s just a means of giving back and helping people out who might need it,” Inch explained. “It’s a small part of a bigger vision we have for this church. We want to sort of rebrand the idea of church. We’re supposed to be the hands and feet of Jesus. Jesus was always out in the public helping people. We want people to see the church is a friendly place and we’re willing do whatever we reasonably can do to help.”

Inch says he doesn’t know for certain if anyone has used the boxes, though a similar offering on Prince Edward Heights has been used regularly. When Inch revealed the churches boxes on social media, Donnie Duffy indicated people have come to a box he maintains at his home on Caen Court to take blankets and clothing. Some have been returned for washing and reuse. During a severe cold snap about three weeks ago, he had 13 blankets, four sleeping bags and a number of sweaters used in just one night.

That night, concerned residents on the Prince Edward County Well Managed Community Group Facebook page encouraged the County to do something to provide shelter. It eventually led to the opening of both arenas as designated warming centres and motivated Inch to move forward with some of his own plans.

“That one cold weekend that we had basically kicked my butt into gear to get going,” he recalled. “There are certain things where we need to come together and partner and work together and not put everything on the County. Yes, the County has a responsibility for a lot of things, but there’s also organizations and people who can step up and help them as well. We want to be an extension of what is going on.”

Inch said members of his congregation had been tossing around the idea of creating an emergency shelter in one end of the church basement for some time. They envisioned areas where cots could be set up. They saw potential with a dedicated access door and adjoining rooms for staff to set up an office and a sleeping quarters.

“We’ve been thinking about this for years for this space, but we didn’t know who to talk to or where to get started,” he said.

Earlier this month, Inch started talking more seriously with County councillors and staff about the project. He also spoke to representatives from food banks and other community groups and solicited support on social media.

Inch said ongoing conversations could offer necessary information about legalities of providing a service for homeless people. They might also help to shed some light on how regular a problem it is and how to properly manage that service when demand ebbs and flows.

There’s also talk of forming partnerships to use the commercial kitchen space at the church to offer a program like a soup kitchen where people can count on a good, hot meal. Already, once a month, the church opens its doors to students for a free lunch program. Inch said if that materializes, he doesn’t want to compete with restaurants but to fill a hole in the system for people who aren’t getting access to food.

The church is also open to discussing ways it may help the municipality with affordable housing, Inch said. He’s discussed the idea of creating a transitional apartment space in the building that might give someone a helping hand on a short-term basis.

There’s a lot to consider, but Inch believes an action plan can be put together this year.

“We have this space. We don’t have a large congregation with a lot of money, but we can make the space available,” he said. “I’m hoping to see something by next fall, by the time we get through the talks, the legalities and cutting the red tape. We’re putting together an action plan and a staff of volunteers. I hope we’ll be ready by next fall and extremely ready by next winter.”

In the meantime, those who wish to help can contact Inch at 613-922-5279. They can also bring blankets, sleeping bags or clothing for the boxes.Those donating are asked to put clothing in a plastic bag and either make arrangements to deliver it or drop it off at the basement doors.