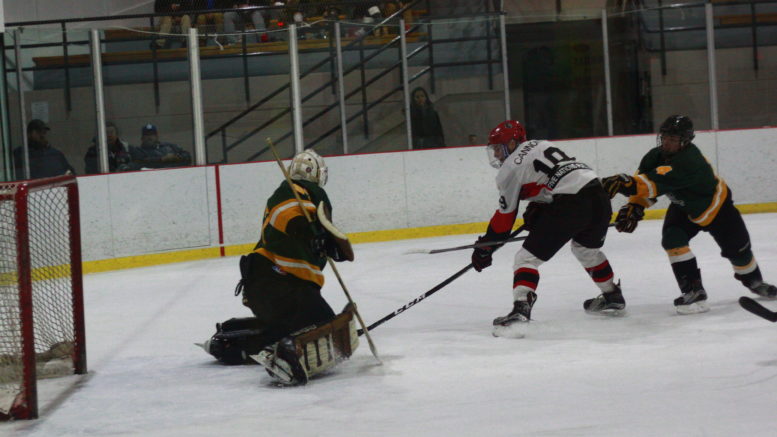 With a win against the Amherstview Jets last week, the Picton Pirates officially secured themselves at least a third-place finish in the PJHL Tod Division standings.

The Pirates earned a 7–3 win over the Jets last Thursday before downing the Gananoque Islanders 6–4 on Sunday night.

Pirates general manager Chris Masterson said it has been a good season so far for the club and team brass are happy with the group as a whole. Everything has come together pretty well for the team this season. The club has avoided major injuries and both veterans and young players alike have been playing well.

“We had playoff expectations and we’ve met those,” he said. “In that sense we’re happy, but the next expectation is to win at least a playoff series and see what happens after that.”

It was a rocky opening frame for the Pirates on Thursday.

Amherstview’s Joey Mayer scored 5:17 into the period. Picton responded with a Devin Morrison power-play goal at the 8:50 mark, but four minutes later the Jets came right back with a power-play goal of their own off the stick of Aiden Harris. The Pirates were outshot 20–10 in the period.

Masterson said the most concerning thing lately has been the team’s consistency.

“In our minds, we haven’t been playing a full 60 minutes,” he said.

After the opening frame, Masterson said the coaching staff delivered the message that the team must be better.

“We felt the first period on Thursday was one of our worst periods of the year and the message was basically ‘get your act together, we’re going to have to be better than this if we want to go far in the playoffs,’” he said.

The message appeared to get through as the Pirates reeled off four unanswered goals in the second period.

Nate Boomhower got things started, scoring an unassisted goal 3:20 into the middle frame to tie things up. Noah Brant got the go-ahead goal with an unassisted marker of his own midway through the period. Chase Burden doubled the lead, completing a play from Brayden Bertrand and Jaydon Wood to make it 4–2, and Jordon Cannons’ tally made it a three-goal lead with less than four minutes remaining in the frame.

Up 5–2 to start the final 20 minutes, the Pirates went right back to work with Justin Arnold scoring from Trey Maracle just 53 seconds into the period.

Aiden Harris finally stopped the bleeding with a shorthanded marker with less than five minutes remaining, but it was too late.

The Jets pulled their goaltender to try to cut the deficit, but Will Harrison found the empty cage to close out the 7–3 victory.

There was a reversal of sorts on Sunday as the Pirates opened the game hot in Gananoque.

Midway through the first period Cannons tallied a power-play goal from Nick Kyte and Brant to open the scoring. Just under two minutes later another power-play tally made it 2–0. This time it was Trey Maracle scoring from Arnold. With just 50 seconds left in the frame, Brant gave Picton a commanding three-goal lead.

Early in the season, said Masterson, the Pirates were able to make the most of first periods. Lately, starting on time has been a problem. That wasn’t so on Sunday.

“We really emphasized that first period and coming out to a better start and the boys were flying,” he said.

However, the tables turned in the second period.

Nick Maillett scored 2:40 into the frame to cut the lead to 3–1. A Luke Donovan goal midway through the period reduced the deficit to one. With three minutes remaining in the period, Matt Carter’s goal tied the game.

Masterson said the comeback amounted to a couple of bad breaks for the Pirates, noting that the team was still playing well despite the result.

“It wasn’t our best period, but it really wasn’t as bad as it seems,” he said. “In the end, good teams find a way to win those games and we did.”

Brant scored from Morrison and Kurtis Wood 22 seconds into the third to regain the lead for the Pirates, but a Braedyn Asselstine power-play goal at 6:41 put the teams back on even ground.

With six minutes remaining, Pirates captain and leading scorer Cannons potted a timely goal from Wood and Matthew Scott to put Picton in front once more. The Islanders pulled their goaltender in a final effort to tie the game, but Cannons put the puck into the empty net to complete the hat-trick and secure the win.

The empty-netter was Cannons 38th goal in 35 games this season. In his final season, Cannons is giving everything he has every night, said Masterson.

“He really is key for us and he not only scores a lot of goals, but scores timely goals and he did it again [Sunday],” he said.

The Pirates have five games remaining on their regular season schedule, starting with a post-season prelude against the Port Hope Panthers Thursday night at 7:30.

Masterson called on the local fanbase to pack the Prince Edward Community Centre for the game.

“It’s a playoff preview matchup, we think it’s going to be a good game and I’d like to see the Picton arena full,” he said.

The club will then travel to Campbellford to face the Rebels on Saturday night at 7:30.