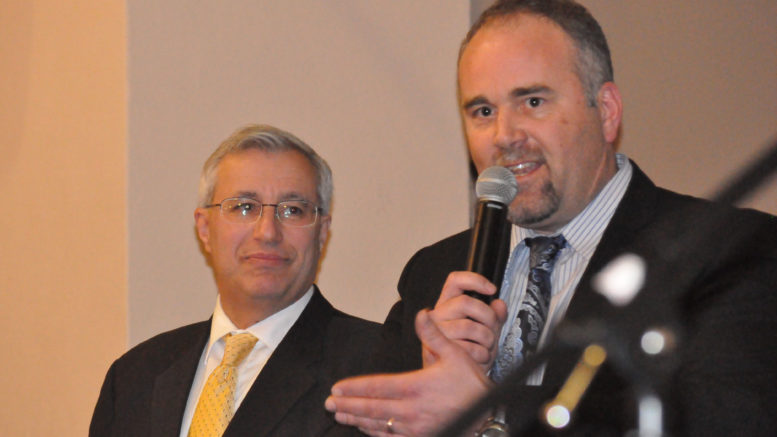 Prince Edward-Hastings MPP Todd Smith was in a public meeting in Demorestville last Wednesday when his phone started to ring. That was the first sign of a whirlwind of change in his Ontario Progressive Conservative (PC) party that still may not be finished.

As it stood Monday, Smith was pleased that longtime colleague Vic Fedeli was in a position to steer the party toward an election in June and confident he’ll provide the stability necessary to overcome sudden turmoil just over 100 days before a provincial election. “He’s a guy who is very thorough, he’s been an unbelievable finance critic in keeping the Liberals’ financial improprieties on the front burner. He was a tremendous energy critic as well, so he knows the two biggest files very well. He’s very direct and he doesn’t stand for any shenanigans,” Smith said. “He’s the steadying force our party needs right now and is the perfect guy to lead the PCs into the election.”

As Smith was listening to presentations about the proposed Sophiasburgh food hub that night, the caller on the other end of his line told him he should be aware of a very important press conference at 9:45 p.m.

Smith and a constituency assistant returned to Belleville and watched as Ontario PC leader Patrick Brown categorically denied allegations of sexual impropriety in his past. They continued to watch as CTV News broke a story featuring two anonymous women.

One indicated Brown had invited her to his home while she was in high school about 10 years ago. She was intoxicated at the time and said, while sober, Brown exposed himself and requested she perform oral sex.

A second woman, who was working in Brown’s office during the summer of 2013 while she was university student, shared a similar story of Brown inviting her to his home after a night at the bar. She indicated, while sober, he kissed her and climbed on top of her on his bed. She told CTV she would characterize the actions “as sexual assault.”

Brown vowed to remain as an MPP while working to definitively clear his name.

Watching the story, Smith said he knew the caucus would have to act.

“I think we were all in shock. We weren’t expecting that to be the news story of the night. We knew at that time we had some work to do.”

Prior to the 2015 election, PCs experienced a cringe-worthy moment when then-leader Tim Hudak announced in an interview his government would eliminate 100,000 public sector jobs. It turned out to be the issue that swung the election.

While that made Smith uneasy, he said there was an “entirely different” feeling watching Brown’s press conference. The party acted swiftly as it played a role in convincing Brown to resign in the early morning hours of Thursday. He said there was no waiting to take action.

“It was something that needed to be dealt with quickly. I think when the 100,000 jobs thing happened, it was a communications issue at that point. This was allegations against the leader of the party and I think it became very clear to us in the caucus that he couldn’t remain leader of the party with these types of allegations hanging over his head,” Smith said. “Caucus needed to move on, and he needed to move on to allow him the opportunity to clear his name because keep in mind these were nameless, faceless allegations that were coming out — he wasn’t going to have time to clear his name with those allegations hanging over his head with the election coming as quickly as it was.”

Putting politics aside, Smith said he felt for all of the people involved.

“I really feel for the victims, first of all. Clearly, I think if young ladies are coming forward, it’s not an easy thing to do. I feel for those individuals first, but it’s hard not to feel for somebody when he doesn’t really have the opportunity to defend himself,” he said. “No charges have been laid yet. I’m not sure if charges will be coming. In this era, it seems like you are guilty immediately on social media before you’ve had an opportunity to clear your name. It’s a societal issue, not just here in Ontario right now, but around the world.”

Smith stressed “there’s no place for these types of alleged activities in Hollywood, or at Queen’s Park or in Ontario” however and he conceded that regardless of how Brown fares in clearing his name “what we’ve seen happening is people who are in an authority position putting themselves in a dangerous position with junior staff members.”

He said a developing story involving Ontario PC president Rick Dykstra appeared similar in nature. Dykstra resigned Sunday  as Maclean’s was poised to run a story about allegations he sexually assaulted a young staffer during the 2015 federal election. Dykstra also denied the story and intended to respond.

Following Brown’s resignation Thursday, Smith said members of the PC caucus discussed the need for solidarity and by the time they met Friday morning to name an interim leader, Fedeli was a unanimous choice to carry the party banner.

Prior to his high-profile roles at Queen’s Park, Fedeli was a two-term mayor of North Bay and he is a self-made millionaire. Smith worked closely with him on several shared files, including a jobs and economy task force they sat on together after being elected in 2011.

According to Smith, the caucus also decided they didn’t want a leadership campaign prior to the election. The party’s brass disagreed, however, and they’ve said a leadership vote would be held March 24. Besides Fedeli, several names have emerged, including some high-profile people outside the caucus like Caroline Mulroney, Doug Ford, and Rod Phillips. The local MPP hopes they’ll reconsider.

“For those of us who have been through leadership campaigns in the past, we now how divisive that can be. We don’t want to be focusing our guns inwardly on those in our party, we should be focusing on the matter at hand and that’s limiting the Kathleen Wynne government that’s been in power for 15 years,” he said, charging that government has made life much harder for Ontario residents.

Divisiveness aside, Smith said with all the turmoil recently as well as the recent hacking of the party’s information systems technology, the party’s headquarters has indicated it may not have the infrastructure to host a leadership convention so close to the general election.

“Those saying we need to go to the grassroots on this aren’t looking at the entire picture here. It makes a lot more sense to get our act together internally and focus on the intended target here.”

Smith said he doesn’t believe the party will face backlash from its membership at the polls if it rides through to the election with Fedeli without a leadership campaign. He noted there’s a public sentiment — particularly among members of the party — that it’s time for a new government. Regardless of the decision he believes most will rally around the chosen leader and work to that end goal.

“Either way I think we’ll come out of this united.”

He also said he disagreed with the sentiment that the party’s next leader must be female to win.

Regardless of whether Fedeli is the leader and even if the party ultimately wants to distance itself from Brown, Smith said he believes it should continue to campaign on its People’s Guarantee platform the former leader rolled out in November. He pointed out grassroots party members all had opportunities to contribute and to vote on its content.

“We were feeling very confident about that document going forward into an election campaign,” he said. “The idea of potentially tearing it up just seems insane to me given the timing that we find ourselves in with the election just around the corner.”

Fedeli has endorsed the platform.