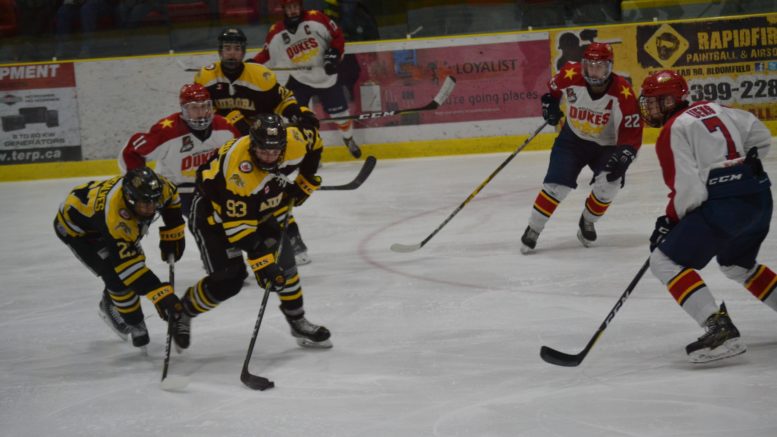 IN CONTROL- Aurora Tiger forward Anthony Romano fires a puck to the Wellington net as Dukes defenceman Zach Uens tries to make a block at Essroc Arena Friday evening. Wellington lost to the visiting Tigers 4-3. (Alana Pickrell for the Gazette)

Penalties and bad choices came back to bite the Wellington Dukes as the local Junior A outfit dropped their only game this weekend.

Wellington led the visiting Aurora Tigers inside the final ten minutes of the third period 3-2 and looked to be decent shape to gain at least a regulation point in the contest Friday night at Essroc Arena but that glass half full scenario was emptied.

With 9:48 left in the third, Rizvan Mansurov collected an Austin Eastman pass through the high slot that Wellington forward Graeme McCrory couldn’t keep his stick on and blasted home a goal to tie the game at 3-3.

Just under four minutes later with McCrory off for a neutral zone slashing infraction, Aurora captain Jake Bricknell would score a powerplay goal from the blue line to push the Tigers ahead 4-3.

Things would go from bad to worse for Wellington in the late stages as Mason Snell took a phantom holding penalty with 3:30 left which ate up significant time in the final moments.

Wellington was able to mount a rally and Teddy McGeen knifed a puck off the post in the dying seconds but Aurora backup netminder Jack Irvine stood tall down the stretch and stopped every Wellington volley through the back half of the period.

Wellington, perhaps frustrated with the fact they were whistled for six straight infractions by Ontario Hockey Association officials Duane Parliament and Danny Emerson, boiled over at the end of the game and Mitch Martan earned himself a two game sit down for abuse of officials game misconduct.

Ben Evans was also assessed a misconduct but got off with the lighter ten minute variety and wasn’t lost for Wendesday’s match up against Newmarket.

In total, Wellington took six minors to Aurora’s three and while that might seem like a meagre amount considering the Ontario Junior Hockey League’s two most penalized teams were going head-to-head, it was the timing of the infractions that killed the Dukes’ chances.

Mitchell Mendonca gave the locals an early lead as he scored off a nice powerplay rush at 9:12 of the first which stood up as the frame’s only tally.

In the second, a pass from behind the Wellington net to the Dukes bench during a line change made for an obvious too many men penalty.

Aurora wouldn’t score on the powerplay but the Wellington player serving the minor couldn’t rejoin the action before Anthony Romano set up Elijah Gonsalves to tie the game.

A couple of shifts later, it was Gonasalves setting up Romano to push the Tigers ahead 2-1.

In the third, Declan Carlile made a nice feed to Martan at the side of the net to get Wellington back to square at 2-2.

Just under a minute later it was Martan beating Irvine again thanks to help from Teddy McGeen and Colin Doyle to make it 3-2.

Wellington’s Jonah Capriotti made 27 saves in a losing effort.

Their 64 points still leads second place Kingston by ten in the East Division but the race for first overall in the North East Conference has tightened up significantly.

With two games in hand, the Tigers trail Wellington by just two points.

After hosting Newmarket for a make up game that was originally scheduled for Dec. 22, 2017, Wellington will host Markham on Friday night and travel to Whitby on Sunday.