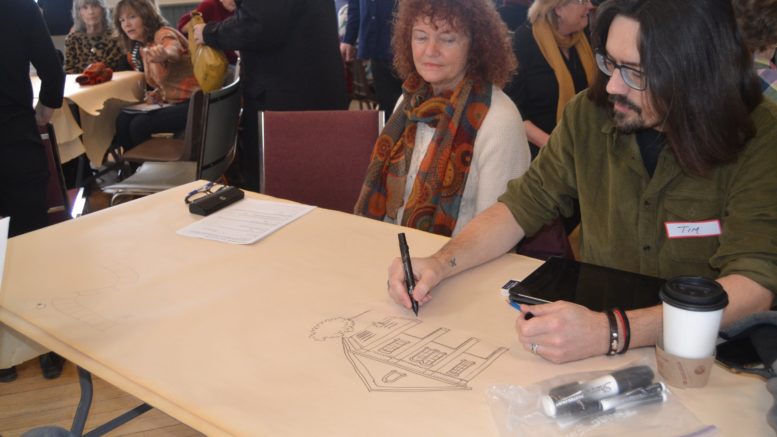 HAVING A VISION- Local artist Tim Snyder draws a representation of Picton Town Hall during a Community Visioning session in January of 2018. (Jason Parks/Gazette Staff)

Artists offer creative talents to present ideas from over 50 people

Most knew the well worn flight of stairs that leads to the oft-frequented upper sanctuary but it wasn’t their favourite activity or meeting group that drew them inside on a rare mild Sunday in January. 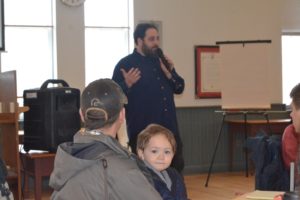 The Save Picton Town Hall group hosted a community visioning session in advance of a likely  request for proposals from  County council that will ultimately decide of the gathering place and former fire hall.

The visioning session employed a handful of local artists (Tim Snyder, Marc Keelan-Bishop, Andrew Csafordi, Teresa Westervelt and Krista Dalby) to capture thoughts,  ideas and concepts in an imaginative and artistic way that was later shared with the entire room and would provide the committee with ample fodder when developing their proposals.

Retired people, business owners and young families could be seen sitting around tables speaking about why the town hall was important to them, what the future might hold for the structure that was built in 1866 and how it might best stay in the community’s hands.

“It was really nice to see a diverse segment of our community be engaged and offering voices and visions,” Renaud said.

Among the ideas cultivated through discussion captured by the segment of talented artists included a bike depot and exchange, accommodations and hostels, a merry-go-round, a skating rink, a climbing wall, co-operative businesses, weekly pop-up clinics, a repair cafe, a hub for start-up businesses, community skills workshops, a tourism home base for walking tours, a non-profit restaurant, an apiary and even a return to Picton Town Hall’s original intended use-A farmer’s market and market hall.

After the groups answered the question of what was the best town hall they could imagine, they  were tasked with how a town hall might recoup some of the costs the municipality would incur by keeping Picton Town Hall open.

Renaud said the groups spoke of rental fees and sales percentages turned back to the municipality to cover the annual operational costs of Picton Town Hall.

Based on a survey handed out, almost all of the attendees indicated that keeping Picton Town Hall as a community held resource was vitally important to them.

“The general consensus has been that it’s better to keep Picton Town Hall a community-owned asset because once it’s sold off to the private sector, even if it’s in a public-praivte venture, it’s out of the community’s hands for good and lost forever,” Renaud added.

Picton Town Hall could still be leased or rented to private enterprise that would serve a common good and offer accessible  space.

But the municipality maintaining ownership was key for the group.

“The ownership of this hall is so important to the community. There’s  so much history here and it’s a very unique and central space with an elevator and it has that special floor that’s so important to so many users and groups,” said Renaud.

Sunday’s grassroots exercise will be part of the idea list the working group will be working from and honing in the coming weeks prior to the RFP being released.

Renaud added the working group is looking for community-minded volunteers and people willing to engage in developing viable ways to keep this resource in the community.