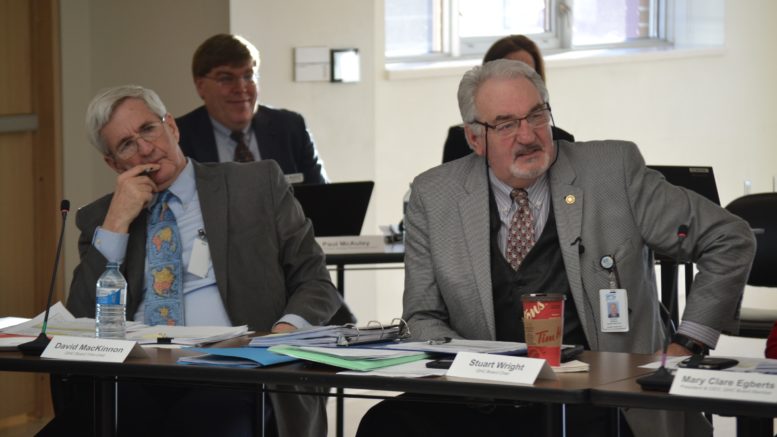 NEW PLACES AT THE TABLE- (Right) Incoming Chair of the QHC Board Stuart Wright is replacing Doug McGregor (not pictured). Also moving up the chain of QHC command is (Left) David MacKinnon who will serve as Vice Chair (Jason Parks/Gazette Staff)

The Quinte Healthcare Corporation (QHC) will be undergoing a time of transition in the coming months.

Late winter and early spring is usually a somewhat chaotic time for the hospital as it contends with flu season as well as its annual budgeting process.

But the regular upheaval this time of year is compounded as QHC deals with a couple of departures as well as a laundry list of needs in terms of physicians and specialists.

At the top of last month’s board meeting, it was announced Stuart Wright would be taking over as chair of the board after Prince Edward County resident Doug McGregor submitted his resignation due to personal reasons.

Wright had served as the board’s vice-chair.

Filing Wright’s role will be David MacKinnon who had previously served as the QHC board treasurer.

Board member Karen Baker will fill the void and serve as the head of the audit and resources committee.

At the start of the January meeting, Wright thanked McGregor for his tireless efforts and many years of service to QHC.

In addition to a change in the chair, the board will be searching for a new chief of staff in the coming months as Dr. Dick Zoutman announced early last month he had tendered his resignation to accept a role with the new Scarborough Rouge Hospital.

While Zoutman’s defection has been known for some time, the board approved its 2018 Professional Staff Human Resources Plan late last month that outlines physician recruitment for the coming year.

According to the plan, QHC requires staff members for its family medicine, internal medicine, emergency medicine, maternity and cardiology departments.

Other physician needs under consideration include a respirologist, an ophthalmologist, an ear/nose/throat specialist and a urologist.

“If we’ve learned anything in health care it’s that there’s going to be constant change,” QHC president and chief executive officer Mary Clare Egberts told the Gazette. “I’ve always been impressed with everyones ability to work under change.”

Egberts said the loss of Zoutman would not have too much of an impact on recruitment efforts.

“(Zoutman) has done an outstanding job of setting up a terrific medical advisory committee and the chiefs of the departments really play the key role in attracting the new staff members,” Egberts said. “I believe we will keep moving forward in that respect and we are certainly appreciative of resources such as the Trenton Memorial Hospital Foundation and the municipality of Quinte West have put in place for physician recruitment.”

As far as Zoutman’s replacement, Egberts said it was likely too early to put a timeline on finding a permanent replacement.

“I think the Board will need to take stock in what the role of chief of staff entails and see what the needs of the position require moving forward,” Egberts added.

The board is likely to name an interim chief of staff in the meantime.

Wright added that Zoutman has been indispensable in his service to QHC and when it came time to find a new chief of staff that the board would be taking input from hospital members.

“I think we need to listen to the people inside these walls,” Wright said “Thankfully, we have some great leadership from the physician staff and we have that great bench strength.”

Thanks to some additional Ministry of Health and Long-term Care flu funding, QHC was granted some 15 additional beds as well as eight surge beds in order to deal with the natural influx of patients that visit regional emergency rooms this time of year.

Despite being over capacity consistently, Egberts said staff have been meeting the challenges head-on.

“It’s a busy time of year for the hospital but I’m very happy with how we’ve met the challenge so far,” Egberts said. “All of the pre-planning and additional monies from the Ministry of Health and Long-term care to ramp up capacity during surge times has helped, but the doctors and staff are doing a phenomenal job of treating some very sick patients.”