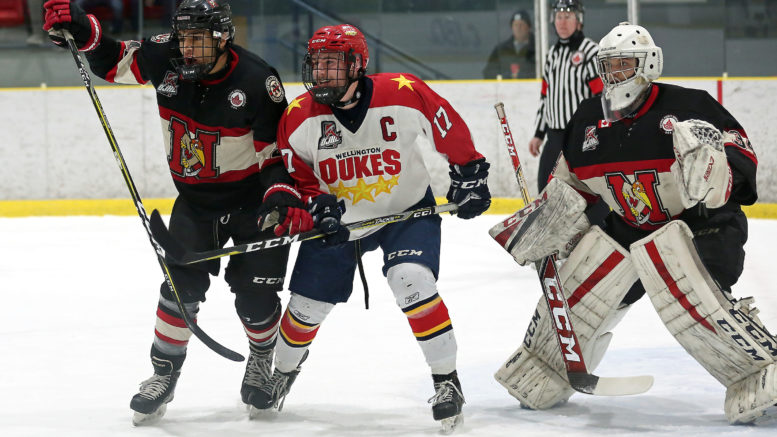 IN THE EYE OF A HURRICANE - Wellington captain Colin Doyle battles for position between defenceman Adam Trotman and goaltender Fraser Kirk of the Newmarket Hurricanes during the first period of the Dukes' 4-3 loss Wednesday night. (Photo by Ed McPherson / OJHL Images)

A late season speed bump or a sign the club isn’t more than a regular season standout whose progress has stagnated?

Only time will definitively answer that question but one thing is certain after this weekend.

The Wellington Dukes are in need of a soul-searching exercise if they are going to make any inroads in the Ontario Junior Hockey League’s Buckland Cup Playoffs.

The win helped Wellington stay in the hunt for first overall in the OJHL’s Northeast Conference and the club finds itself tied with Aurora with 66 points however the Tigers have three games in hand and will almost surely pass Wellington this weekend.

Bad period starts, poorly timed and ill-advised penalties and missed opportunities-it all came back to haunt the locals time and again with the exception of the clean sheet in Whitby on Sunday afternoon.

A day later, the club went into Cobourg and played well for 20 minutes.

“I think they thought they had it under their belts after the first period. At this age, the players don’t always understand that it takes 60 minutes to win a game to be quite honest with you,” Druce told the Gazette.

Last Wednesday, Wellington welcomed the Newmarket Hurricanes and found themselves down 2-0 after the first.

The Dukes battled back with a pair of their own in the second as Ben Evans and Jeffery Burridge scored midway through the frame to knot the game at 2-2.

Wellington would have probably liked the opportunity to regroup with the game tied at the second intermission but Canes forward Nicholas Soehner scored his first OJHL goal with under three minutes left in the frame to put the visitors ahead 3-2.

Newmarket would extend the lead to 4-2 after a predictable Wellington penalty taken at the end of the second period effectively killed Wellington’s chances at a comeback.

Mitchell Mendonca’s powerplay goal in the third got Wellington back in it but another late period penalty crushed any momentum the Dukes might have had for a late game equalizer. 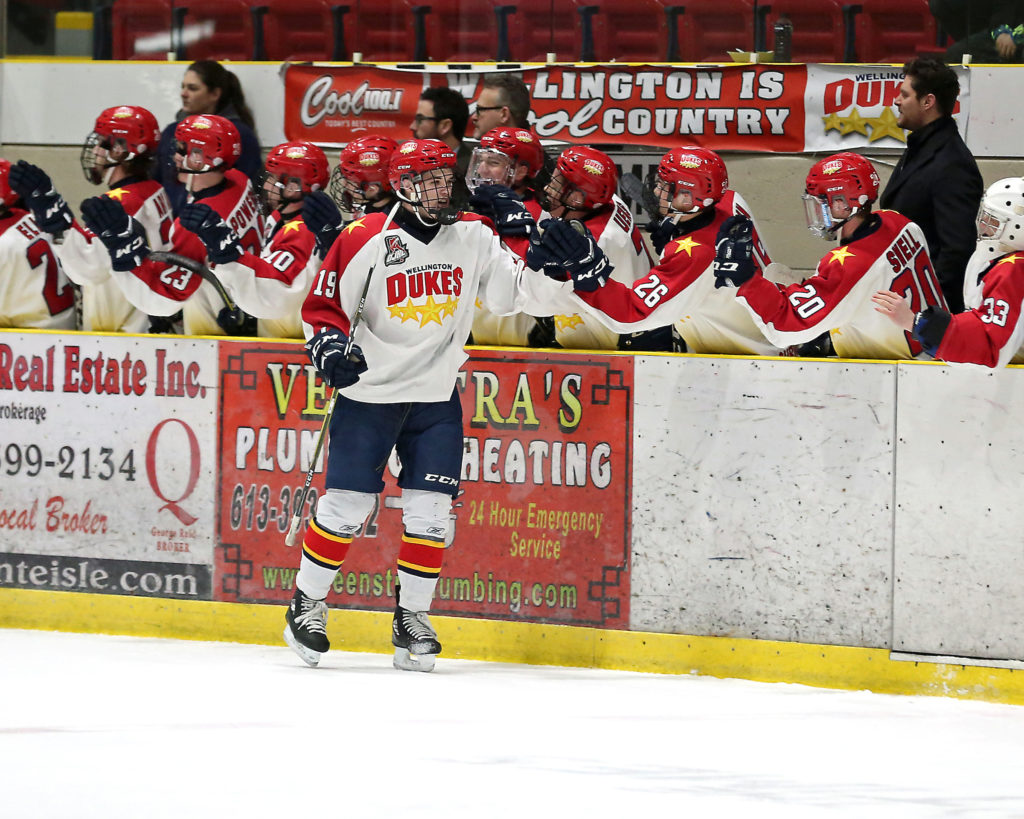 ON THE BOARD- Wellington Duke Jeffery Burridge celebrates his third goal of the season Wednesday night. Wellington lost to the Newmarket Hurricanes 4-3.
(Photo by Ed McPherson / OJHL Images)

On Friday, Markham came to Wellington with only one win in their last five contests but the Waxers put a late game hurting on the Dukes and skated away with 6-2 win.

Up 3-2 after two despite being out shot heavily, the Waxers preyed on Wellington’s discipline issues to put the game out of reach.

A Bain Cunningham powerplay goal in the first minute while a Duke was in the box for an unsportsmanlike conduct penalty was the back-breaker.

Later, Braedyn Aubin’s first of two in the frame came with an extra attacker in case Wellington had any illusions of a comeback and the contest ended 6-2 in favour of Markham.

On Sunday, things came together nicely for the locals thanks in part to an early two goal punch by rookie Daniel Panetta who scored in successive shifts to push Wellington ahead 2-0 before the halfway mark of the first period.

Mack Warren and Geoff Lawson would also score for Wellington and netminder Jonah Capriotti stopped 23 Whitby volleys to pick up his fifth shutout of the season.
As positive a note the Whitby game was, things went sour the next evening in Coburg as the Cougars beat Wellington for the first time this season in a 7-5 firefight.

Despite being outshot badly, the Dukes had leads of 2-1 and 3-2 nearly partway through the contest before a pair of second period power play goals undid Wellington’s best laid plans permanently.

Dawson Ellis potted a goal just 72 seconds in and Mitchell Martan’s 22nd of the season staked Wellington to an early 2-0 lead.

Cobourg would battle back to halve the lead later in the first and tie it the second but a Ben Evans effort just five minutes into the frame swung the momentum back in Wellington’s favour.

Powerplay goals by Matt Bumstead and Jacob Black vaulted Cobourg to their first lead of the game and that margin was extended to 5-3 thanks to a late frame marker by Connor MacEachren.

Wellington wasn’t quite done as Andrew Rinaldi and Evans both scored in the first six minutes of the third to tie it at 5-5.

But that familiar tune of a referee’s whistle at a crucial point of the game sounded and a Wellington skater made the all-too familiar path to the sin bin.

To their credit, Wellington did kill off the infraction however Cobourg’s Brodie McDougall would score just over a minute after the penalty expired to push the hosts ahead to stay 6-5.

A late empty net goal off the stick of Jamie Engelbert made it a 7-5 final.

A former NHLer that’s had success coaching at the Jr. A level, Druce is well aware that Wellington’s lack of discipline has been its achilles heel as of late.

The club is second in the OJHL  in Penalties in Minutes with 1084.

“It’s not because we are young, it’s the whole team. It’s hurt us, we’ve noticed this trend since day one and these are things that have made difference between wins and losses,” Druce said.

If it’s break in the schedule Druce and his club need, they will certainly get it.

“The team had a good start to the season but they are going to have to learn to play that hard and heavy style that you need to win playoff hockey,” Druce said.

The head coach added the team is going to utilize this time that will be a much-needed break to get refocused and rejuvenated in advance of the last few games prior to playoffs.

“I don’t look at this break as a bad thing. In terms of our play as of late, sometimes you need to deal with adversity to know that you can bounce back from it.”

Wellington’s next game, the final home contest of the 2017-18 regular season doesn’t come until Friday, Feb. 16 when they host Pickering.