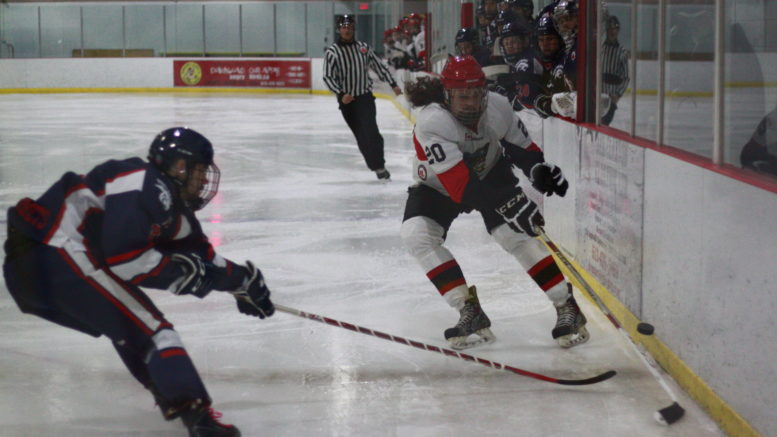 With the postseason just a few weeks away, the Picton Pirates faced down their eventual first round playoff opponent.

After getting down by a pair early, the Pirates came back to beat the Port Hope Panthers 5–4 last Thursday.

Including Thursday’s win the Pirates have beaten the Panthers three times in seven meetings this season. General manager Chris Masterson said it was an important victory for the club and one that sends a message to both teams.

“They are finalists in the Schmalz Cup the last three years and they’re still a very good team this year, so for us it was a confidence boost,” he said. “That first round playoff series is going to be a good one, we’re right there and we’re capable of winning.”

Port Hope quickly took control in the first period of last Thursday’s game. The Pirates struggled to generate much offence while the Panthers had them hemmed in their own zone for several stretches. The opening goal came late in the first with Graham Dickerson finding the back of the net on the power play when he deflected a low shot high over the blocker of Picton goaltender Pierce Nelson.

The shots were recorded at 11–1 in favour of Port Hope through 20 minutes.

The Panthers doubled their lead at 4:46 of the second when Braydon Crowe bulged the twine. Just 20 seconds later Mike Chambers was called for cross checking, sending the Pirates to the man advantage.

Only 10 seconds into the power-play opportunity, Nate Boomhower connected on a play from Devin Morrison and Noah Brant to cut the lead in half.

Less than a minute later Boomhower scored again to tie things up with Justin Arnold assisting on the play.

The Pirates continued to pressure and, just 1:10 later, Jordon Cannons scored on a play from Morrison and Brant to give Picton their first lead of the game. In a span of two minutes, the Pirates had overcome the two-goal deficit and had taken the lead.

Masterson said the Pirates have done a good job all season of not getting too down on themselves when playing from behind. That ability to recover is something that should serve the team well in the playoffs, he said.

“We’ve always responded well,” he said. “We have a real pattern of that going where we get down a little bit and we respond well, so that’s another good sign come playoff time — good teams do those kinds of things.”

Masterson said there was never any feeling of panic on the bench when the Panthers took the two-goal lead.

“Even when we were down 2–0 we felt, actually, pretty good about things and (the comeback) didn’t surprise us,” he said.

But the back and forth play continued.

Under two minutes after Cannons’ go-ahead goal, Kallen McFarland scored to make it 3–3.

After a furious first half, play in the second period evened out. It looked as if the teams might go into the final frame deadlocked, but Gerald Bilker’s goal from Will Harrison at 16:35 gave the Pirates the advantage.

The Panthers came back with renewed drive in the third and evened the score again at 5:03 with McFarland tallying an unassisted goal.

Nelson had to be sharp as the Panthers continued to generate chances and he was, shutting the door the rest of the way.

Midway through the third, Port Hope’s Austin Veleke took an interference penalty and it would prove costly. On the ensuing man advantage, Morrison found the back of the net on play from Boomhower and Nick Kyte.

The goal held up through the remainder as the third as the Pirates took a big 5–4 victory.

Both of the Pirates’ power-play goals were timely. Masterson said special teams have often seemed to play an important role in the team’s games against Port Hope this season. The power play is something they have been working on, specifically with Port Hope in mind.

“We’ve known for quite a while that we are playing Port Hope in the first round, so we’ve been preparing for that,” he said. “That game on Thursday was a chance to test some of that out and it worked well.”

The clubs are destined to clash in the opening round of the PJHL Tod Division playoffs, the Panthers holding second place in the division with 53 points and the Pirates securely in third with 47 points. Napanee leads the pack with a 32-2-0-1 record and 65 points through 35 games and will meet fourth-place Amherstview (18-19-1-0) in the first round.

Picton was scheduled to take on the Campbellford Rebels on Saturday night, but that game was postponed to a later date due to weather.

The Pirates will take on Campbellford Thursday night at 7:30 at the Prince Edward Community Centre. Then it will be a rematch against the Panthers in Port Hope on Saturday at 7:30 p.m.

Masterson said the Pirates can’t take the Rebels for granted and the game will be another chance to sharpen up before the playoffs begin.

“We’re building momentum and building structure and discipline for that first round playoff match-up,” he said. “For us it’s important to not take them lightly, but also important for us to use it as preparation for our upcoming series.”