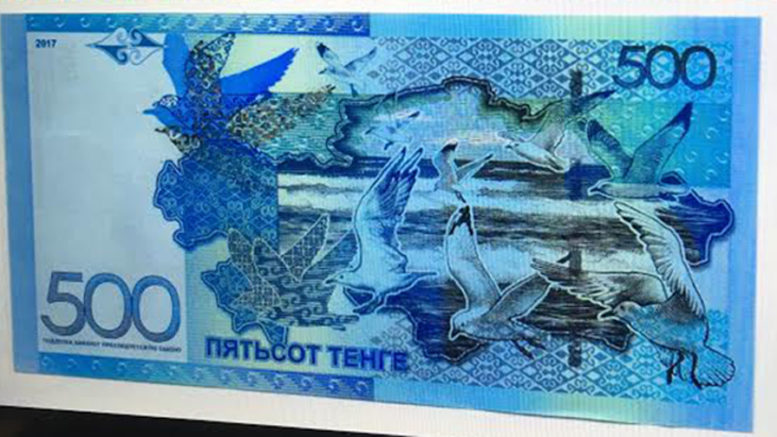 Suspicious seagulls - The top right seagull on this Kazakhstan banknote is the one Kate Tester said she took at Sandbanks Provincial Park. A Swiss photographer claims he captured the bottom right bird. (Submitted photo) 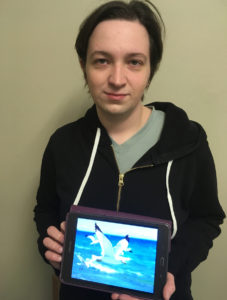 Stolen art -Kate Tester says she was surprised to learn in December that a photo she took at Sandbanks Provincial Park was used to produce a banknote released last year in Kazakhstan.. (Jason Parks/Gazette staff)

A photograph taken by a Picton woman at Sandbanks Provincial Park has landed at the centre of an international copyright controversy.

On Christmas day, Kate Tester logged into her account on the DeviantArt web gallery when she received a series of unexpected messages on her personal page. One simply stated her photo had been stolen. Another was more specific, laying blame with Kazakhstan’s national bank.

Tester shot a photograph of a seagull at the beach and she posted it online in July 2010. It sat there until November, when she says it appeared on the new 500 tenge (about $1.95 Canadian) bill. Indeed, one of the seagulls printed on the bill bears a similar pose and markings, but it has been reversed.

“The proof was right there when I looked,” Tester said. “In my gut it feels so wrong, considering it’s art. When it’s something you photograph, you see things through your eyes. when you see someone has taken what you saw, you can tell. The eye of the photographer knows.”

A Swiss photographer, Marcel Burkhard, was one of the people to message Tester. He had one of his seagull photographs posted on Wikipedia and surmised it also appeared on the bill. Burkhard was already fighting the alleged theft and had secured the services of a Kazakh lawyer who was working pro bono to bring the case to light. He put Tester in contact with that lawyer.

“It’s been this crazy, crazy ride,” Tester told the Gazette.

The lawyer told Tester people in Kazakhstan are quite any their government or its contracted artists stole other people’s work. He offered to work on the basis that he’ll get 10 per cent of any settlement reached. Since Tester says she can’t afford a lawyer of her own, her hopes rest on him.

“It’s a godsend I have somebody over in Kazakhstan saying I’ll help. People have asked, ‘Is he going to screw you over?’ I thought that, but what else do I do here? I can get somewhere with this guy, or stay in Picton and say, ‘They stole it, what can we do?’”

Tester said she’s tried reaching out to free legal clinics and her MP, but so far she’s found few answers. Anyone advising her has noted how different the legal systems in the two countries may be.

Initially, the bank denied the theft when Burkhard confronted them. One official reportedly stated the birds on the note shared characteristics of all representatives of their species. Eventually, when Tester also came forward, she said the theft was acknowledged.

An offer of $3,000 in restitution has been made, but Tester says that’s not enough.

While Burkhard indicated he’d donate any royalties he gains to charity, she said she could use the money as she’s currently working part-time as a cashier at NoFrills. It’s also a matter of principle.

“For me, I want the credit. I want them to say ‘Hey, this was yours” and offer some sort of apology. And since somebody else received credit for something that was mine, I should receive something.”

Tester also said she’d be interested in being given a copy of the bill. Burkhard bought one on eBay, but she didn’t feel right having to buy something that’s her own art.

An introvert, Tester is also concerned about the intrusion into her life and the stress of the case, however, she said it might be a blessing for her art. “It could be a few years of just nonsense and craziness. There’s a part of me, because of the stress of it, that wishes I hadn’t been told, but at the same time I’m kind of happy about it. I’m mostly getting recognition.”

Indeed, Tester has had plenty of followers around the world on her DeviantArt page and she’s also been contacted for several interviews, though her lawyer has cautioned her against accepting some from Kazakhstan and Russia because of the interviewers’ motives. She’s also fielded a number of inquiries from artists asking about Picton and the Sandbanks.

The incident has also allowed Tester to connect with people in Kazakhstan, a nation she said she’d only really heard about in the fictional film Borat.

“A lot of the people from Kazakhstan have been really nice. They said, ‘Please don’t think this is a representation of our country… it’s the bank to be angry with, not us,’” she said. “That’s part of the reason I think the lawyer wanted to help Marcel and I. It reminds me of places like China where they have this strong sense of honour.”

Tester now wonders if any of her other work has been stolen. She says her tale can serve as a cautionary one to anyone posting materials online.

“I was just out there at the beach, I really didn’t think anything would happen,” she said. “This shows the danger of posting things online. You never know who could take it and what they can do with it — even if you have protection.”