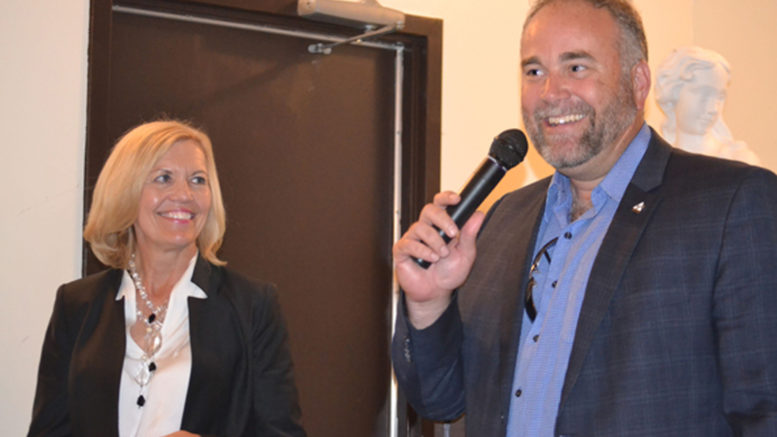 Together again - Todd Smith recently announced he’d serve as co-chair on Christine Elliott’s campaign for Ontario PC  leadership.. He also campaigned for her leading up to a 2015 leadership vote, including at this event in Sept. 2014 at Casa Dea Estates Winery. (Adam Bramburger/Gazette staff)

Prince Edward-Hastings MPP Todd Smith is not running to be the next Ontario Progressive Conservative leader.

After announcing he was mulling over a run early last week, Smith quickly decided the cost was too rich for him, bowing out of the running via a statement on social media last Thursday evening.

The decision came after the party’s executive set a $75,000 entry fee to run and an additional $25,000 fee to access the party’s member database. It also ruled campaigns could spend $750,000 leading up to a vote next month to head the PC ticket against Premier Kathleen Wynne.

“Leadership campaigns often result in candidates assuming a substantial burden of personal debt that takes years to pay off. The fees established by the party executive last night are simply too high,’ Smith said in his statement.

The party’s energy critic also indicated he didn’t want to place an undue burden on his daughters Payton and Reagan by taking on this campaign, particularly with Payton starting her post-secondary education within the next year. Family was most important, he concluded.

“In the last few days, thousands of Ontarians have called, e-mailed and messaged me to encourage me to run. I thank them for their support. I thank them for saying that I would be a good leader or a good Premier. But being a good father is so much more important to me than either of these things.”

As Smith was announcing his choice to stay out of the race Thursday, he welcomed the news that former Whitby-area MPP Christine Elliott declared herself a candidate. He had raised concerns about the timing of a leadership campaign and stressed the value of a seasoned caucus member being in the mix to lead the party at Queen’s Park. Elliott fits that bill in a race that also now includes Caroline Mulroney and Doug Ford — both big names, but neither a sitting provincial politician.

While Smith backed Elliott in the 2015 leadership race, he didn’t immediately offer his support.

“One of the many reasons I supported Christine Elliott in the last leadership race was because of the incredible role model she was, and still is, for my girls,” he said. “But I want the best person for the job, period. I want the person who is going to continue the work (interim leader) Vic Fedeli is doing right now. I want a person who aspires to service, integrity, and selflessness.”

Eventually, Smith decided Elliott was still the best candidate for the job and he is now her campaign co-chair.

Earlier, however, Smith said his team went over some realistic scenarios that could have seen him trying to prove he was that person. He told the Gazette he had enough people behind him to be comfortable in stepping forward.

“They were there. There was just not enough time to raise the cash. It’s too bad they set the fees and limits so high.”

Down the road, circumstances may be different. Many of Smith’s supporters on his social media pages urged him to consider running in the future. It appears Fedeli is also behind his friend and colleague.

“Todd burst onto the provincial scene in 2011, led by that booming voice. It didn’t take long to learn that he’d backed his brawn up with his brain. He’s been a leader in caucus, a leader in the legislative chamber, and a solid resource to all stakeholders and families all across Ontario,” Fedeli posted on Facebook. “His constituents love him — they’ve seen the caring side of Todd. He has a wonderful and impactful political future ahead of him. He’s chosen not to enter this leadership race. A tough decision. But his time is coming. Let’s keep following his stellar career and encouraging him. Big things will come.”