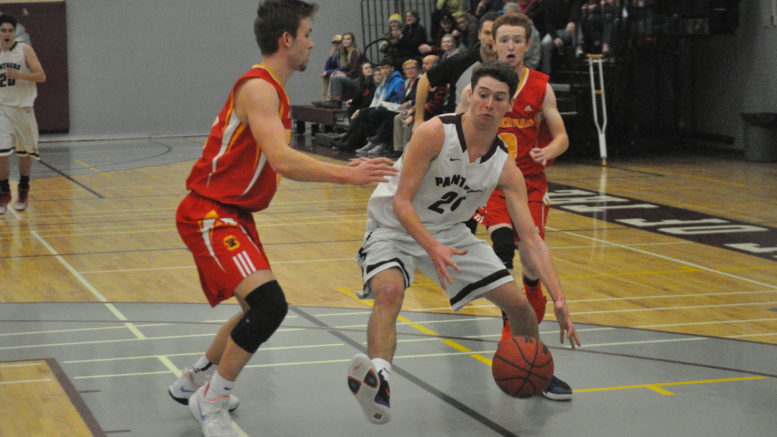 Drive to the hoop - PECI Panther Wyatt Gilbert works to get in position for a layup against Sydenham at Moira Friday. (Adam Bramburger/Gazette staff)

The PECI Senior Basketball Panthers had a chance to shake off some exam rust and prepare for the playoff drive with three games against tough teams from the east at Nicholson’s Crusader Classic.

The Panthers tipped off the tournament Friday at Moira against a scrappy, physical Sydenham Golden Eagles team that currently sits fifth in the Kingston area league. They put up a 45-30 while spreading scoring around and rattling the Eagles with tight defensive play.

“We knew it would be a test,” coach Rob Garden said. “They have some really skilled fifth-year guards who penetrate very well, so our focus was on stopping dribble penetration and then clearing the boards. Our size and length gave Sydenham trouble and we held them to a season-low 30 points.”

While the Panthers controlled the key with the size and athleticism of players like Alex Arsenault, Braedan Kelly, and Brodie Byford, it was their sharpshooter Johnny McHugh that led the attack with 14 points. Kelly and Wyatt Gilbert also chipped in seven apiece. 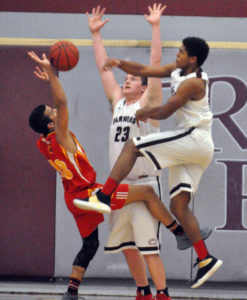 PECI would go on to play a different breed of Panther in Game 2, the imposing squad from Lester B. Pearson Catholic in Ottawa. The AAA squad looked like it was going to be a tough one to beat.

“They were extremely athletic, and on paper, they were the definite favourites,” Garden said.

The challenge may have motivated the garnet-and-white, however, as Garden said his charges put forward their best offensive output of the year in a 68-63 win. Though the Pearson guards seemed to be able to score layups at will, the Panthers were unfazed. They’d simply go to the other end of the court and score themselves. Ultimately, the team from Ottawa couldn’t match the Panthers’ big men.

“They dominated down low and got a lot of offensive rebounds, which led to put backs,” he said.

Another two first-year seniors also stepped up their play when it was needed most. Guard Devon Wilton had one of his best efforts this year, also scoring 14 points, and Jack MacCool hit his season high of 10.

“It was the first time that all of our Grade 11s looked comfortable in a game at the same time and we didn’t have to rely on McHugh to score,” Garden said.

Game 3 saw the Panther the Brockville St. Mary Crusaders, a team they’d lost to by five points in an earlier tournament this season. Their will to exact a little revenge was quickly dashed, however. After just eight minutes, the Crusaders led by 18 points and never looked back in a 59-43 decision.

“Unfortunately, we started this game with zero energy and found ourselves in a 23-5 hole after the first quarter,” Garden said.

That said, the Panthers’ effort to get back into the game was valiant.

“Seemingly out of the game, our guys never gave up and started to chip away,” Garden said, adding PECI was able to cut the deficit to just four points going into the fourth quarter before running out of gas.

The coach credited Gabe Goad, noting his defensive efforts to shut down a key St. Mary guard gave the bench a boost when it was most needed.

After the 2-1 weekend, Garden said he felt the trip to Belleville was worthwhile.

“Overall, we played 10 great quarters of 12 and we will look to use the lessons learned in the playoffs.”

The Panthers will start the playoffs at home this afternoon with a 1:30 p.m. tip against the Centre Hastings Centurions. It’s expected to be a tight contest as its a match-up of the fourth- and fifth-seeded teams in the Bay of Quinte Conference. Though the Panthers are at home in the first round, Garden said they’re buying into an underdog approach.

“Our goal is to get past the four-versus-five match-up and qualify for COSSA,” he said. “Then, we will refocus and look at upsetting Nicholson in the semifinals. They are one of the best senior teams I’ve seen in a long time, but we will approach it as a challenge and give them everything we have.”

The PECI Junior Basketball Panthers, who also played in the tournament and posted a 1-2 mark, will play the early game at noon, hosting quarterfinal action against the St. Paul Falcons. They finished the regular season in second place.