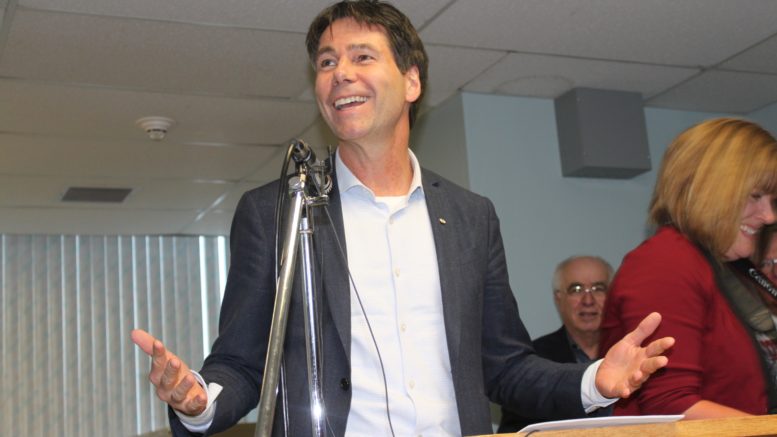 Lest there be a doubting Thomas remaining in this community when it comes to the new Prince Edward County Memorial Hospital (PECMH), Ontario health minister Dr. Eric Hoskins answered any questions about whether this community would soon see an acute care facility in the near future.

On Monday, standing in a board room at the hospital, Hoskins didn’t mince words or try to qualify where the Quinte Healthcare Corporation (QHC) was on the path to a new facility that would eventually replace the current PECMH.

“This hospital will be built,” Hoskins told reporters.

Hoskins and the Ministry of Health and Long-Term Care announced in a crowded vestibule at the rear of PECMH the province was providing QHC with a $500,000 planning development grant to commence drafting the detailed considerations for a new hospital that will be built on lands adjacent to the current footprint.

This grant essentially serves as green flag for hospital planners to start measuring rooms, mapping potential patient flow and align services to various parts of the facility which is expected to cost around $76 million.

The announcement doesn’t call for requests for proposal or to schedule any groundbreaking ceremonies but those auspicious events can be seen on the horizon as 2024 looks as a realistic year when the new PECMH will be ready to start admitting patients.

“The hard work now begins,” Hoskins told the media. “Now it’s in the hands of QHC, the board and the PECMH Foundation and the community to move through the next stages in a responsible and expeditious way.”

Hoskins trumpeted the new facility as a state-of-the-art hospital that would provide patients with access to a range of services in one location.

An outpatient clinic, a 24/7 emergency room department, inpatient beds, surgical suites and a dialysis clinic are all services the minister mentioned by name.

And the new PECMH will be built with space for co-location of community support services that may or may not be directly health related.

“The health-care hub is a concept that’s gaining traction right across the province and I think there’s a great opportunity here to not only provide a great facility but also to re-imagine how a variety of services are offered to the community,” Hoskins said. 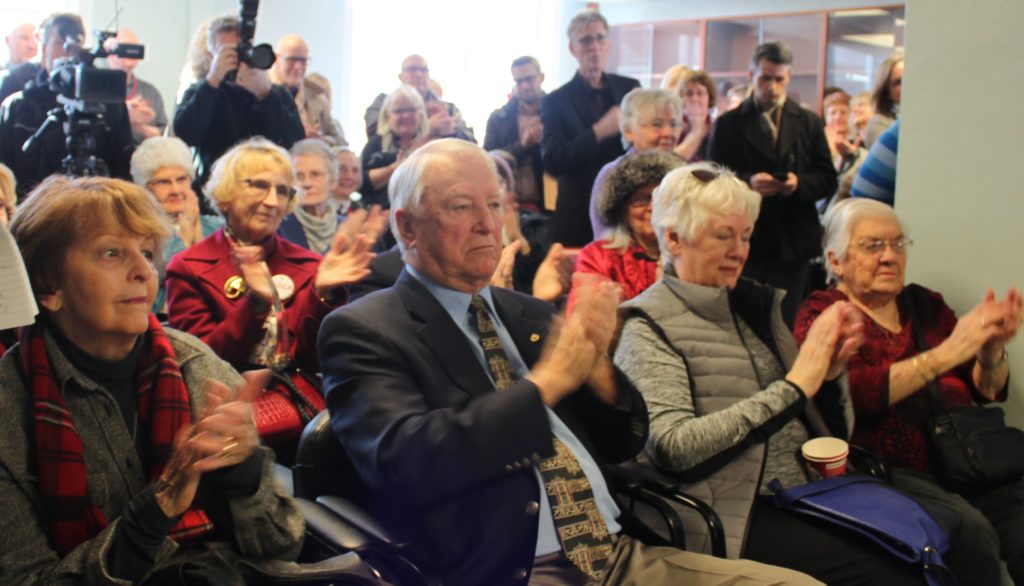 Hoskins added there was great community support for PECMH and that the facility was dutifully served by a supportive Prince Edward County Family Health Team.

“The only thing that’s missing is a new facility so lets work quickly and soon to provide that high level of care that everyone deserves,” Hoskins said.

While there’s always been a want for a new, first-class hospital in Prince Edward County, the will has been, at times, on shaky ground .

It about a decade ago when then-Minister of Health and Long-Term Care George Smitherman declared at the Crystal Palace the Ontario government would be investing money to examine the case for a new hospital here in Prince Edward County.

But unsure financial footing, a dismissal of the QHC board and a tenuous relationship between the community and the hospital controllers ensured those plans went no further than pipe dreams.

SE LHIN vice-chair Brian Smith made remarks Monday and, as a former QHC board chair, had the unique prospective of being on a number of sides during the twisting and winding road of the redevelopment of PECMH.

Smith scanned the room filled with PECMH supporters and citizens that were ever-mindful of their local healthcare system said Monday’s event filled him with feelings of deja-vu and emotion.

“I remember meeting with members of the Prince Edward County community and those meetings could get rather, uh, interesting,” Smith said with a laugh. “To everyone’s credit, we persevered, the vision was a common vision to replace this facility and build a new PECMH and know that the LHIN board is standing strong behind this project. The persistent work and collaboration among partners has strengthened support for this project and has allowed partners to celebrate milestones along the way.”

Smith and longtime PECMH champion Leo Finnegan have traded barbs in the past but remain friends and Smith reiterated his longstanding and public belief that the two will reunite when the new PECMH is opened.

“I’ve said it from the start ‘We will see you at the ribbon cutting ceremony Leo’ and I still intend to do that,” Smith told Finnegan.

Finnegan, a former hospital board and QHC board member and current PECMH Foundation member called Monday a “good day” for the beloved hospital.

“It’s a good day and we are making real progress. This is a happy day,” Finnegan told the Gazette.

The former Prince Edward County mayor admitted that the animosity between QHC and the community had eased somewhat through the redevelopment project.

“It’s been much improved in the last couple of years,” Finnegan said of the relationship, adding that he was going to remain on the Foundation board to “see this project through.”

Prince Edward County’s current mayor Robert Quaiff said he has been reinforcing the point his community needed a new hospital with the Health Minister at every opportunity and expressed his gratitude for Monday’s announcement.

“I have stressed how important it is for our residents, regardless of their age, to have access to health care services close to where we live and having a redeveloped PECMH is major priority for the long-term health of our community,” Quaiff stated. “We need a new modern hospital for our residents and the thousands of visitors we get every year so our community can easily receive a wide range of primary care services. Today is another exciting step in achieving that goal.”

While there was some talk about the venerable building that’s served this community since 1959 and been the scene of so many emotional moments for thousands of county residents, Monday’s announcement was about the future of local healthcare and that was clear in PECMHF chair Monica Alyea’s comments.

The foundation will be tasked with raising the community’s portion or $12.7 million and Alyea pledged the group was up to the challenge.

“We have a passion for this and we are going to hit that funding target between now and the time we hope to be opening our new hospital in 2024 or 2025,” Alyea added, thanking the health minister for the province’s decision to green light the PECMH redevelopment project.

“We need investment in our community’s future.”