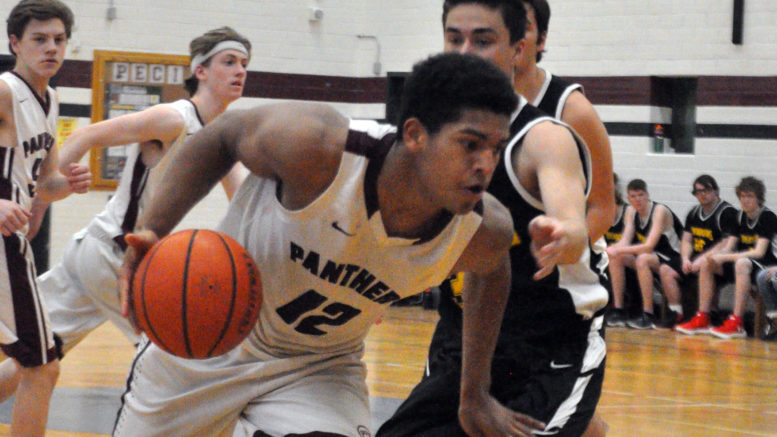 With one of the tallest rosters of any team visiting the PECI gymnasium this year, it looked like the Centre Hastings Centurions could provide an answer for the Senior Panthers’ power game.

It was pretty evident early on in Friday’s quarterfinal that wasn’t the case. The fourth-seeded Panthers powered their way to a 72-28 decision over the fifth-seeded Centurions — and they did so with their own big men gobbling up the ball under the boards. Brodie Byford had 16 points and Alex Arsenault 14.

Collectively, they also shot well from the floor with seven three-pointers, including three in a 21-point first quarter. Go-to shooter Johnny McHugh had 15 of his game-high 17 points from beyond the arc. Arsenault said the Panthers were simply ready to make a statement in their gym.

“I think we came out with the mentality that we wanted to win and we fought really hard for the win. We were just ready for this game,” he said. “I also liked the mentality on the bench. We really had the hype. Those guys kept it lively for the guys on the floor. We had lots of energy and were like beasts today.”

The teams played a physical, emotionally charged brand of basketball and the Panthers were able to keep grinding past the Centurions with a deep bench as they cycled players through at will.

“This team is a close-knit group and it’s really handy to have the amount of guys on the we have for injuries, if people get tired, or even for morale reasons to keep the energy high and to keep the positive vibes going. It’s a great team to be thankful for.”

Gilbert — one of three graduating Grade 12 players alongside Braedan Kelly and Ben Clarke, who were honoured before the game — added the Panthers set the tone in Friday’s game with a familiar focus on playing stingy defence, even after soundly defeating the Centurions in the regular season.

“We knew we weren’t playing the strongest team, but it all had to start with the defence. After that, the offence just took care of itself,” he said.

Building good habits in their preliminary round game was also important in developing the game plan they’ll need if they hope to advance past the top-seeded Nicholson Crusaders in Tuesday’s semifinal at the Providence Gymnasium. Belleville’s green machine proves to be a tough challenge.

“They score the ball really well and they have a lot of experienced players who have been playing basketball together for a while. We have to be prepared for that,” Gilbert said. “It’s taking away time and space for every player, double teaming them, getting hands in their faces, and being big when we have to be to shut their shots down and get steals.”

If the Panthers can do that and if they can match the Crusaders’ execution, then there might be a chance for a berth in the Bay of Quinte Conference final. Arsenault said the team is prepared to rise to the occasion, which fittingly is the slogan they’ve chosen to wear on their warm-up shirts. “We’re the underdogs in that game, so we can use that to our advantage. We can pull out a big win if we focus hard and come out ready,” he said.

With the win over Centre Hastings, the Panthers again qualified for the COSSA championships, though they’ll have to wait to see their Bay of Quinte Conference finish to determine where and when they’ll play. Coach Rob Garden noted after the game, the trip to regionals has almost become an annual expectation.

It’s a development in which the players take pride.

“I feel like, for myself, it’s an opportunity to get better this year to go to OFSAA in my first year as a senior and I’m hoping to make COSSA every year for my high school career,” Arsenault said.

Added Gilbert, who now has made the trip every year, “It’s special to end off on this note. Obviously, the chance to qualify for OFSAA is an even more exciting feeling. Just like today, we’re going to have to bring defensive intensity as well as offensive execution to get there.”