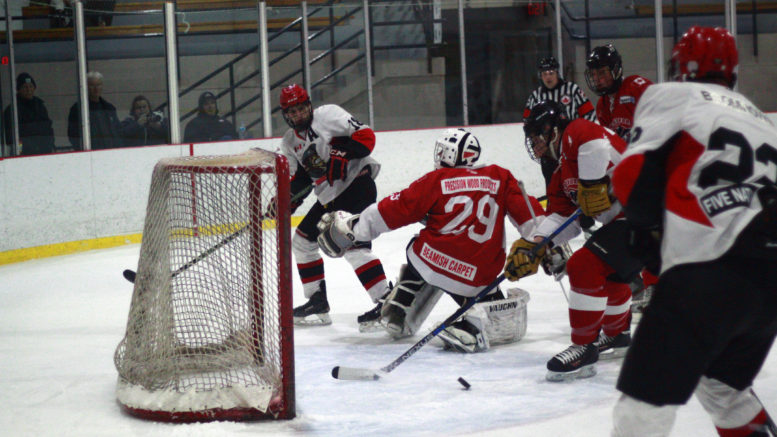 The Picton Pirates picked up another win versus Campbellford, but fell to the Port Hope Panthers in their final regular season meeting.

The club earned a 6–3 victory over the Rebels on Thursday night before losing by a 5–3 margin in Port Hope on Saturday night.

While the Pirates added to their win column, general manager Chris Masterson said it wasn’t the Pirates’ best game.

“We weren’t happy with the way we played but, at the same time, it’s hard to get frustrated,” he said. “Campbellford, with where they are in the standings, it’s tough for guys to get up for those games, so as much as we preach it as preparation for the playoffs and not taking them lightly, we did not have our best game.”

The team had plenty of chances to connect on the opening goal of the game Thursday, but as the clock wound down to the final minute, the score remained deadlocked at zeros.

With just 42 seconds left in the first, a Noah Brant shot sailed wide of the goal and bounced off the end boards to Nick Hoey who fired it past sprawling Campbellford goaltender Alex Ward. Kurtis Wood also picked up an assist on the goal.

It looked like the Pirates would carry the lead into the second period but, just 25 seconds later, the Rebels rushed into the Picton zone and Robby Ellis buried the tying goal.

Picton carried an 11–7 advantage in shots, but went into the break tied 1–1.

While it was a frustrating setback, Masterson said the goal didn’t impact the Pirates’ mindset.

“It was a bit frustrating on our side, but the guys knew that we would eventually pull it out — we felt confident enough that we were going to do it,” he said.

The Pirates continued to pressure and fire shots on the Campbellford goal, but it wasn’t until midway through the frame that they were finally able to take the lead again. The goal came at 10:16 of the period with Hoey finishing off a play from Gerald Bilker and Wood. But, again, the Rebels came back. Just over a minute later Nolan Stevenson made it 2–2.

Only seconds after the goal, Campbellford’s Ryan Jones was called for cross checking and the Pirates went to the man advantage.

It was Brant scoring the go-ahead goal on the power play at 12:53 with Nate Boomhower and Nick Kyte picking up the assists.

The back-and-forth play wasn’t finished, however, as Dawson White found the back of the net at 16:33 to make it 3–3.

The Pirates had held three leads in the game and just under two minutes later they got their fourth. This time it was Bilker scoring from Hoey and Will Harrison at 18:13 to make it 4–3 and they took the one-goal advantage into the final frame.

The Pirates held a 15–6 advantage in shots in the period.

Early in the third Campbellford was assessed a minor for hooking and Picton’s power play went to work. Jordon Cannons scored on the ensuing advantage to make it 5–3. Hoey and Brant had the assists. Just under five minutes later, another Rebels penalty resulted in a power-play goal from Devin Morrison. Cannons and Brant assisted on the play.

The three-goal lead remained the difference as the Rebels weren’t able to claw their way back into the game.

Cannons notched his 40th goal of the season on Thursday, making it to an even 100 regular season goals in his Junior ‘C’ career. Cannons’ 40 goals this season trails only Napanee’s Ryan Casselman who has 45.

Masterson said it was a different story on Saturday as Picton had a solid start in Port Hope.

“We had a really strong game, the guys came prepared to play,” he said. “Port Hope is still a tough team, they’re second place and they haven’t really lost much this year.”

Brayden Bertrand scored the opening from Tye Eaton and Kyte at the 8:43 mark, but the lead didn’t last long.

Under two minutes later Evan Foley scored a power-play goal with Morrison in the box for interference. Just one minute later, the Panthers grabbed the lead with a Nathan Snoek goal.

Port Hope’s Cameron Lowery was called for high sticking at 14:46, sending the Pirates to the power play. As the seconds ticked down on the man advantage, Hoey capitalized on a play from Matthew Scott and Cannons to tie things up heading into the break.

The Panthers held the edge in shots and chances in the second, but the tie persisted. With less than five minutes remaining in the middle frame, the Pirates found themselves on a five-on-three advantage with both Greg Powles and Andrew Gurr serving minor penalties.

At the 17:23 mark, just as the Powles penalty expired, Morrison scored to give Picton the lead. Kyte had the helper.

The Pirates entered the third with a 3–2 lead, but it was all Port Hope in the final frame.

Masterson said Picton entered the game down three forwards and the shortened bench seemed to catch up with the team in the third.

“It started to take its toll in the third period,” he said. “The guys really did bring the effort and their ‘A’ game for two full periods and I think we just ran out of gas a little bit in the third.”

Dayton Kent scored on the power play at 7:02 to tie things up and at 9:31 Cameron Harris gave the Panthers the lead.

The Pirates weren’t able to tie things up and Cameron McGill sealed the Port Hope victory with an empty-net goal.

The club will play their final regular season contest tonight at 7:30 versus the Napanee Raiders. Masterson said that contest will offer a chance to gear up for playoff hockey. As an added wrinkle, the Raiders are vying to break the Tod Division single season points record of 74, which is shared by the 2013-2014 Picton Pirates and the 2008-2009 Raiders. They’ll need to win all three of their remaining games to do so.

“We want to make sure we’re firing on all cylinders,” Masterson said. “…We’d certainly like to beat them and stop their chances of breaking the Pirates’ record.”