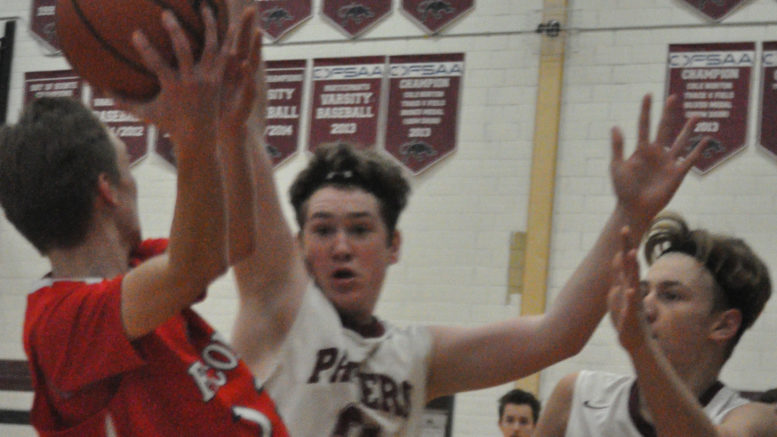 After one quarter Friday, it appeared the St. Paul Falcons were primed to upset the PECI Junior Basketball Panthers to open the Bay of Quinte Conference playoffs. The rest of the game was a different story. 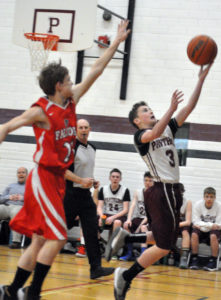 “We started out OK making some shots, then our defence fell off a bit and the other team hit some tough ones. I think that kind of sucked some of our energy out,” he said. “We switched up our press a bit in the second quarter — instead of our zone press, we went to our man-to-man. It’s a little more in-your-face and we played them straight up. That got our guys into it a little more.”

The Panthers started stealing the ball and scoring off the rush. Ghaffar Mehmood led the charge with 11 of his 15 points scored in short order, many coming off turnovers.

Hugh said Mehmood can really be a key for the Panthers when he’s on his game.

“He’s one of the more skilled players in the Bay of Quinte in my opinion. We’re still working with him to make some better decisions on the floor, but he’s very talented. When it does click and his decision making is good, he can be super successful,” he said.

Having deflated the St. Paul effort by the break, the Panthers were able to come out in the second half and get their bench players into the game for some playoff experience. They handled the play well.

“I was really happy with our performance in the second half. With the guys that came in off the bench, our energy didn’t let up and we moved the ball. Sometimes our second unit moves the ball better than our first,” Hugh said.

He pointed to a player like Cameron Pero, who was able to chip in five points off the bench.

The Panthers got 12 points from Ryan Doolan and 11 points from Justin Smith, who connected on three three-pointers. Logan Stark had six points and Thomas Davies five.

The win lifts the Panthers into today’s semifinal, at home against the Quinte Saints, who will be playing with pride on the line knowing every game could be their school’s last. Hugh said the Panthers won the regular season match by four points on the road and assumed today’s game could go down to the wire. The tip is at 4:30 p.m.

Should the Panthers get past Quinte, the could see St. Theresa or Centennial in Thursday’s final at Moira.

According to Hugh, the team will have to play at its best moving forward.

“We have to keep playing hard. Our defence is our staple. We need to bring that energy and we can’t have any lulls,” he said. “We struggle to score, so our defence has to be better than anyone in the league and we have to trust one another to make the right plays.

The Panthers also qualified for COSSA competition by advancing to semifinal play. The coach said he’s pleased with the way the team has competed throughout the year.

“I’m very fortunate to have this group of kids because they’re really committed. There’s no substitute for hard work and they really buy in,” he said. “I was asked by a player if I would trade any of our guys for a player on another team. I said ‘No,’ because I know how hard these guys work. Other guys may bring some different skills, but I know what I’m getting with our guys. They do anything we’ve asked of them.”