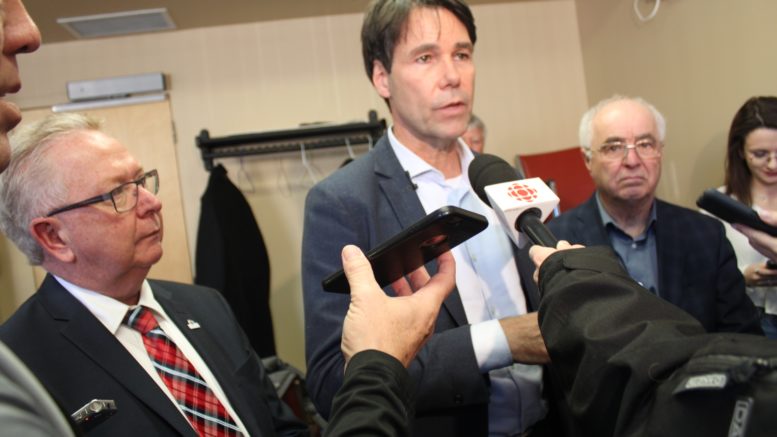 A LONG TIME COMING- (Centre) Ontario's Minister of Health and Longterm Care Dr. Eric Hoskins confirmed (left) Prince Edward County Mayor Robert Quaiff has been requesting an allotment of Long Term Care beds to replace those lost to the community when Picton Manor was forced to close by the Ministry in 2012. (Jason Parks/Gazette Staff)

Minster of Health and Longterm Care Dr. Eric Hoskins was at PECMH on Monday to announce a $500,000 grant to assist Quinte Health Care with design of a redeveloped hospital that will replace the original structure built in 1959.

The current PECMH replaced the former hospital on Hill street that was built in 1919.

That facility eventually became Picton Manor, a 78 bed Class D long term care home that would be shuttered in 2012 after failing to meet a series of compliance orders by the MOHLTC.

During a media scrum after Monday’s announcement, Quaiff and Hoskins were asked about the potential for Prince Edward County regaining the beds that were lost when Picton Manor was closed for good.

The mayor has clearly been championing a number of healthcare issues to the Minister and Hoskins confirmed this.

In 2015, County Council made a motion that endorsed the continued quest for additional LTC beds at H.J. McFarland Memorial Home due to the 78 beds that were lost due to the Picton Manor closure.

H.J. McFarland Memorial Home is currently home to 84 residents and has a lengthy waiting list.

The county is bound by the province to design and construct an expansion of the long-term care facility by 2025 and a staff report issued in 2015 said if the beds are allocated to the county within the next couple of years the expansion could be aligned with the mandated redevelopment.

In order for a rebuild to be financially sustainable, it’s critical the home receive additional beds according to the report.

While the needs of Ontario’s second oldest population per capita has been impressed by Quaiff upon Hoskins, it appears the county will be required to make a formal case to the MOHLTC for an increase on LTC beds for the municipally operated facility.

“We have or will be putting out a request for proposals province wide this week for communities that do want to come forward and have a need for LTC beds,” Hoskins said. “Ontario has committed to 5,000 new LTC beds in the next four years and 30,000 new LTC in the next decade. That will gives communities in this part of the province and others the opportunity to make their case for Long Term Care increases.”