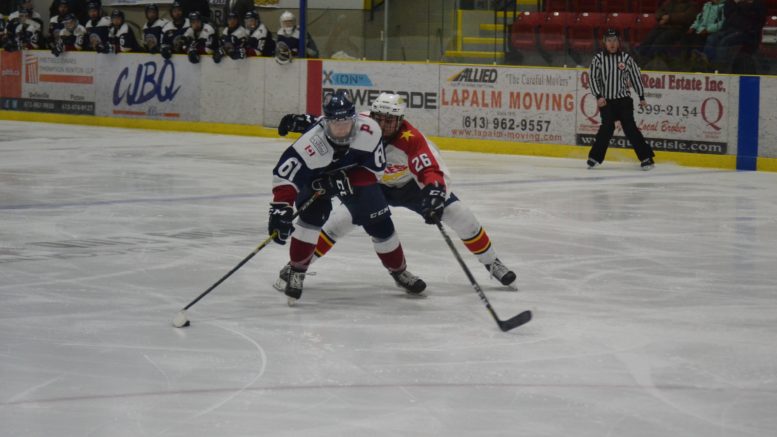 By scoring four out of a possible six points this weekend, the Wellington Dukes were able to put themselves in a position to win the 2017-18 Ontario Junior Hockey League’s East Division title which would be the organization’s first regular season crown since the 2010-2011 campaign.

But by dropping the the third of three games in Whitby Monday afternoon, the Dukes also lost any chance of winning the Northeast Conference title, a regular season accolade that goes to the most penalized team in the circuit , the Aurora Tigers.

With a regular season mark of 31-13-8 and 70 points, Wellington leads the Kingston Voyageurs by four points heading into Thursday night’s head-to-head matchup in the Limestone City.

Each team has two games remaining. Should the Dukes fail to secure a single point in either of their last two games and the Vees take the full compliment of available points, Kingston would hold the tie break that would give them the East Division crown.

In what was Wellington’s final home game of the regular season, the club shaded the Pickering Panthers 3-2 Friday evening and then skated past the short-staffed Stoufville Spirit 6-3 on Saturday night.

But the club didn’t quite have an answer to the Whitby Fury on Family Day at Iroquois Arena as the Rob Pearson-coached club broke a 2-2 in the third and bested Wellington 4-2. 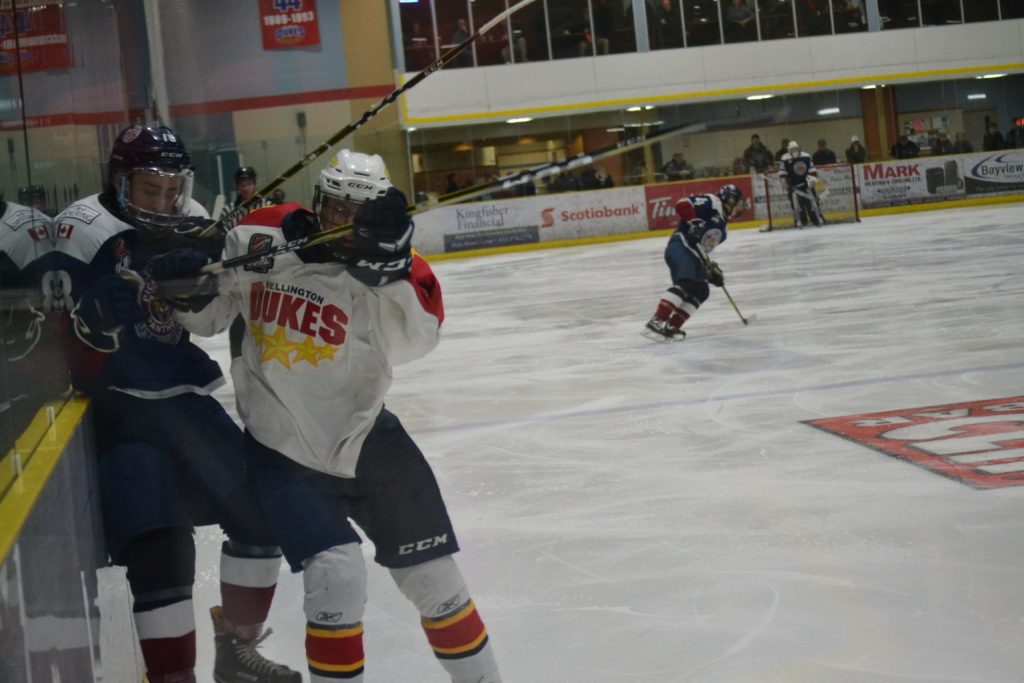 Wellington had leads of 1-0 and 2-1 thanks to goals by Teddy McGeen and Jackson Arcan through 25 minutes of play on Monday but Whitby’s Matt Latin erased the the Dukes advantage twice to make it deadlocked going into the third period.

In the final frame, the Dukes would outshoot the Fury 14-6 but it was second-year forward Liam Robertson with a pair of goals, beating Wellington starter Tyler Richardson twice, first at even strength at 4:42 and then on the powerplay at 9:04.

Wellington went 0-for-2 on the powerplay while the Fury was handed eight man advantage situations and clicked once.

With just 14 skaters in the lineup, Wellington was able to outpace the host Spirit Saturday night in a chippy affair that saw both teams play it rough-and-tumble.

Tied 1-1 after one, Ben Evans took a nice Declan Carlile feed just under a minute into the second frame and snapped it past Andrew Albano to move Wellington ahead 2-1.

Less than a minute later, it was McGeen finding the back of the net thanks to a slick pass from Arcan.

The Spirit would get back to within one thanks to a shorthanded goal later in the frame but McGeen bagged his second of the night by driving to the net and picking up a loose puck with just under two minutes left in the frame thus restoring the two goal margin.

In the third, Stoufville would again challenge Wellington with Connor McBroom potting his second of the game but Wellington had the legs going away with McGeen finishing off his hat trick with a shorthanded effort with exactly three to play and then Andrew Rinaldi polished it off with an insurance goal with under a minute to play, blasting home a nice Arcan feed.

On Friday, Wellington and Pickering played to a scoreless tie through the opening 20 minutes in a potential first round match up.

The deadlock was broke while Wellington was on the powerplay late in the second when Evans found a streaking Martan going to the net with under two minutes left to put Wellington ahead 1-0.

The Dukes heavily outplayed the Panthers and out shot the visitors 15-3 in the middle stanza but only tallied the one goal.

In the third, it was Pickering scoring a powerplay of their own to tie it at 1-1 just 59 seconds later, Rinaldi lead a two-on-one rush and picked the top of the Panthers net, popping the water bottle of Cats netminder Ethan Langevin off the net in fine finishing fashion.

Wellington extended the lead later when Martan managed to rush the Pickering net during a scramble and back handed a loose puck into the Panthers cage to make it 3-1 in favour of the Dukes.

Pickering would get to within one when Dylan Robinson scored off the face off in the Wellington end but Dukes starter Jonah Capriotti was solid the rest of the way en route to his 20th win of the season.

After Thursday’s game, Wellington will finish off the regular season in Trenton on Friday evening.