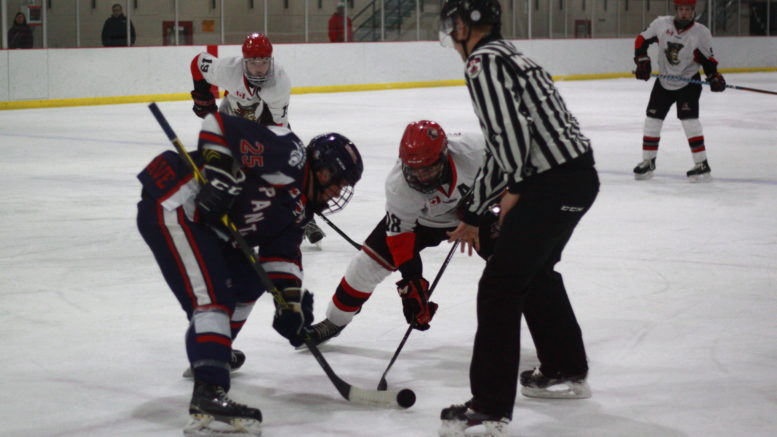 It was an uphill battle for most of the Picton Pirates’ 7–4 loss to Port Hope in the opening game of their PJHL Tod Division semi-final series.

Pirates coach and general manager Chris Masterson said the team was short-staffed from the outset with Nate Boomhower, Trey Maracle, Jaydon Wood, and Riley Manion all out of the lineup.

The Panthers poured on the pressure in the opening frame, firing 28 shots to Picton’s nine.

The Pirates cut the deficit in half with a power-play goal of their own with five minutes remaining in the period. That goal came off the stick of Jordon Cannons with Noah Brant and Devin Morrison notching assists.

However, a Cameron McGill power-play goal in the final minute restored the two-goal lead.

Gerald Bilker scored on the power play from Nick Hoey and Nick Kyte 3:44 into the second to make it 3–2 and the Pirates were withing striking distance again.

A Kallen McFarland goal at 8:32 restored the two-goal lead once again, but Noah Brant’s goal from Hoey just one minute later narrowed the gap.

The back and forth continued with Cameron Lowery scoring at 11:06 and Brant subsequently making it 5–4 just over a minute later.

“We clawed our way back and it was 5–4 and we felt really good,” said Masterson.

However, Cannons was knocked out of the game with an injury, putting more pressure on a depleted lineup. Dayton Kent scored on the power play at 15:44 to make it 6–4 and Brad Bollert added another just 20 seconds later to make it 7–4.

“They scored a couple of goals partway through the second and that kind of sealed it for them,” said Masterson.

Pierce Nelson entered the game in relief near the end of the second period and remained perfect, stopping all 23 shots he faced. Starter Wes Werner stopped 32 of 39 shots in a losing effort.

A game that already had more than its fair share of penalties saw even more trips to the box in the final frame. The Pirates ultimately went two for seven on the man advantage in the game while the Panthers went four for nine. While Port Hope fired 18 shots to Picton’s five in the frame, neither team was able to score in the remaining 20 minutes.

“The third period was a bit of a rough affair,” said Masterson. “It was a little bit physical, a little bit nasty.”

Masterson said the Panthers buckled down defensively while the Pirates sought to set the tone for this Thursday’s clash in Game 2.

“We said the score was 0–0 to start the third and that’s the way we approached it,” he said. “We were happy with the third, things got a little rough and there was a little bit of a message sent there as well.”

Masterson said the team expects to ice its full lineup Thursday with Cannons, Boomhower, Maracle, Wood and Manion all returning.

The Pirates wrapped their season last Thursday in a playoff tune-up against the Napanee Raiders. The regular season finale ended in a 5–3 loss for Picton. The Raiders defeated Picton and the Gananoque Islanders twice in their final three games of the season to set the Tod Division single season points record at 75. The previous record of 74 was held jointly by 2008-2009 Raiders and the 2013-2014 Pirates.

Masterson said the record wasn’t a topic of discussion in the room last week. The focus was on preparing for the playoffs, which were set to begin just two days later.

“For this group it was more about, we need to play well and do all of the small things right to get ready for the playoffs,” said Masterson. “Napanee is a good team, we were short a couple of players and we knew it was going to be a tough game for us to win.”

Before the puck dropped for last Thursday’s contest, the Pirates acknowledged the dedication and commitment of overagers Cannons and Bilker.

Cannons notched 40 goals in 39 games this season and was named the PJHL Tod Division overager of the year.

“He’s tied for second all time in Pirates goals in a season, 100 career goals, he’s been our captain,” said Masterson. “Most of the games he plays, he dominates the game and he’s the guy other teams focus on shutting down all the time.”

The Pirates brought over Bilker in a trade with Campbellford back in 2015. For the last two seasons he’s played fourth-line minutes. This year, however, the 6’4 forward focused on fitness, slimmed down and took on an increased role.

“He came to camp in tip-top shape, probably the best shape of anyone in our group,” said Masterson. “His improvement this year has been astronomical.”

Not only that, Bilker has been a positive presence away from the ice, Masterson said.

“I can’t say enough about the guy,” he said. “…He always puts the team first and he’s someone we’re looking at hopefully keeping around the organization. His love of hockey is second to none on our team. We’re hoping we keep him around in some capacity after this season is over.”

Will Harrison was also honoured this week, winning the PJHL Tod Division sportsmanship award. Harrison had 10 minutes in penalties through 39 games this season and has just 24 penalty minutes in 120 career games.