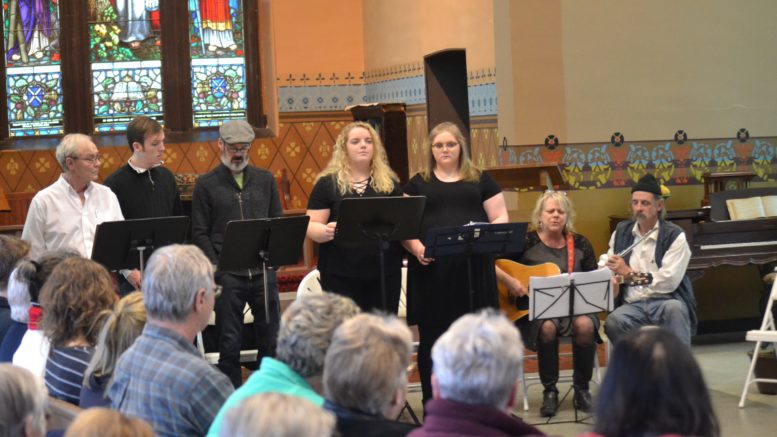 It was a long, strange voyage but Minerva finally docked in Picton on Monday afternoon with a good crowd on hand to welcome her home.

The above could be a lede from a historical file from the pages of the Picton Gazette when shipping was still a frequent activity in Prince Edward County however this a current-day story concerning a beloved and locally developed musical penned by Suzanne Pasternak that re-appeared before a large audience of supporters.

As part of Flashback February-Heritage Week in Prince Edward County, Pasternak unveiled a carefully crafted and redeveloped Minerva: The County’s Most Legendary Heroine at Macaulay Museum to nearly 100 audience members.

The crush to get a prime seat to the general admission sneak peek was such that organizers were forced to shoo away early attendees while the cast had one last audition prior to the 1:30 p.m. Show time.

To say the creator of the folk opera was thrilled at Monday’s turnout was an understatement.

“I knew it in my heart but it still amazed me. Minerva hasn’t been performed here in Prince Edward County in 15 years and it’s such an iconic story,” Pasternak told the Gazette. “People love her and love Moses Dulmage and the story and it’s so powerful.”

The story centres around Minerva McCrimmon, a ship’s cook at age 19 who saved over 20 members of her crew after her ship, the barley schooner David Andrews, went aground near Four Mile Point, N.Y. in a bad snowstorm in April 1880.

Pasternak’s research also uncovered tales of Moses Dulmage, a local son who died in a wintery gale two years earlier whose body had washed up on Lake Ontario’s south shore. Both are buried in the South Bay Cemetery near the Mariners Park Museum.

Pasternak weaved her tale and it premiered before over 300 people Nov. 1, 1990 on the anniversary of Dulmage’s death.

Minerva was one of the early shows to be staged on the revived Regent Theatre stage and the musical was eventually optioned to Mirvish Productions in Toronto where it languished after some initial positive response.

Eventually, Minerva was returned to the hands of Pasternak and local composer Tom Lieghton after it failed to gain traction in the Big Smoke.

“I was so close to giving up after nothing happened in Toronto but it was so important to me not to have that story lost,” Pasternak said.

After a year of refining and adding about 50 per cent new material, a newer and truer Minerva was unveiled Monday with original and new pieces of music and characters.

Pasternak explained the first version focussed on Dulmage and McCrimmon and never really delved into her husband or Lydia Ostrander, a friend who married sailor Henry Whattam after Minerva passed away

“I really wanted to make it more historically accurate and stick to my guns in that sense. When it went to Toronto, it went in a direction that wandered away from historical accuracy so I’m happy it’s back for that reason,” Pasternak said.

The local author hopes to host a summer audition call and put on the performance proper-complete with local talent, dancers and fiddlers.

“And hopefully someone can step up and produce it,” Pasternak said with a laugh.

After years of keeping Minerva off shore and in the dark, Pasternak hopes the play will eventually find a home port where it could be offered regularly.

With the instant and wide ranging popularity of Prince Edward County and a burgeoning appreciation of authentic local tales, Pasternak believes an even larger audience would enjoy the folk opera.

“I think we were ahead of our time 20 years ago but the time might be right now,” she added.

-With files from Adam Bramburger.